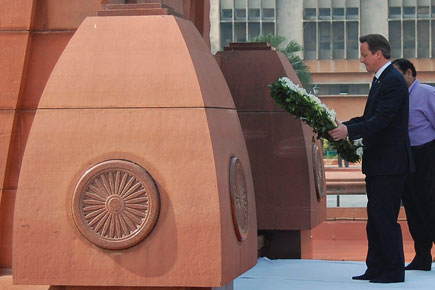 The UK PM’s visit to Amritsar was a poor scrawl in the visitors book of a country that has dealt surprisingly well with its colonial past.


No one asked British Prime Minister David Cameron to visit Amritsar. Nor did anyone want him to apologize for the trigger-happy colonialists who butchered Indians in Jallianwala Bagh 94 years ago. No one asked him to describe the shootings as a “deeply shameful event”.

He did so of his own volition. And, he made it clear that he wasn’t apologising for this “deeply shameful event”. It was a poor scrawl in a visitors book in a country that has dealt surprisingly well with its colonial past. And, let’s be charitable. Let’s say that his Amritsar visit didn’t have anything to do with the Sikh vote back home. Let’s also believe that the comments in Jallianwala Bagh were not aimed at making the front-page, they were genuine guilt pangs.

But, now since you have raised this issue of colonial excess and placed it squarely in the public domain, you will have to bear with me, Mr. Cameron. Let’s read this together – 19th century historian William Hunter talking about Bengal, thirteen years after the Battle of Plassey when the policy of draining India’s wealth had begun in earnest and the rains failed:

‘All through the stifling summer of 1770, the people went on dying. The husbandmen sold their cattle; they sold their implements of agriculture; they devoured their seed-grain; they sold their sons and daughters, till at length no buyer of children could be found; they ate the leaves of trees and the grass of the field; and in June 1770 the Resident at [Murshidabad] affirmed that the living were feeding on the dead.’

This is an extract from Madhusree Mukherjee’s superb book, Churchill’s Secret War: The British Empire and The Ravaging of India During World War II, which I suggest, you read on your next flight to India. About three million Bengalis perished in this tragedy.

The systematic policy of grabbing all Indian wealth and draining it to England wasn’t an easy business. You had to dirty your hands. Force had to be used on occasion with wives of tax defaulters.

This is what Edmund Burke said at the impeachment trial of Governor General Warren Hastings and what his tax collectors did. They stripped naked the wives of tax defaulters, dragged them from their homes and ‘put the nipples of the women into the sharp edges of split bamboos and tore them from their bodies’. These are only two extracts I have picked at random. But we could do go on. And on. See, your violence and our shame was embedded in Empire. We can distinguish between the day-to-day and the spectacular, or how one of your predecessors, Winston Churchill, ensured that no grain reached millions of starving Indians during World War II.

Here’s a small problem, Mr. Cameron. You might find something “deeply shameful” in every city and town of this country, something you may not want to apologise for.

Like other British Prime Ministers who came before you, your visits are no longer confined to Delhi. On this trip, you landed in Mumbai (Bombay), where you might have met with our money-bags. In February 1946, Indian sailors and citizens were shot by British forces when they displayed the banner of revolt. You might find these killings “shameful” by today’s standards.

So, you might end up finding many “shameful” things in all places of the country. Many things happen when you apply force to take possession and exercise control.

Tell you what? Don’t apologise and don’t even see anything “shameful” in individual sets of events. Because there’s no stopping the flow of demands once they start. Even after a bloody partition, it’s a large country – coast-to-coast and end-to-end.

We’ve made peace with our colonial past by seeing it as a policy of particular era. In any case, the new India, like you, is too young to be captured by the obvious wrongs of the Empire. We’re also busy thinking up new curry flavours to capture British palates.

My humble piece of advice: don’t rake up the past without understanding it. If you want to find anything shameful about Empire, please do it at home, maybe in your Parliament.

Because, really, no spin can be put on Empire or history.