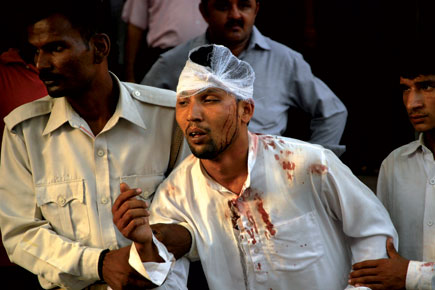 
Rakesh and Naresh Tikait, the commanders of the Bharatiya Kisan Union (BKU), have long been two of the most unpredictable farmer leaders in western Uttar Pradesh. The communal conflagration in Muzaffarnagar and nearby districts shows they have entered a period when they could become even more unpredictable than usual—and perhaps dangerous too. The new axis they have formed with the BJP, in order to realise their political ambitions, has already delivered a serious blow to the social fabric of the Jatland.

The sequence of events by which an isolated crime turned into a widespread communal flare up in Muzaffarnagar and other nearby districts of western UP clearly bears the stamp of this axis. In fact, the 7 September Mahapanchayat that gave way to a series of clashes in the region was called by the Tikait brothers, sons of BKU founder Mahendra Singh Tikait. According to police records, the Tikait brothers, together with BJP leaders Hukum Singh, Sangeet Som and some others, addressed the Mahapanchayat. Provocative statements were made, and once the meeting ended, communal clashes began. Singh is the leader of the BJP in the Uttar Pradesh assembly, while Som is an MLA from the Sardhana constituency.

The Mahapanchayat had been convened over the murder of two people from the Jat community. The two murders followed the killing of a man from another community on 27 August over alleged vulgar remarks passed at a girl in Kawal village, Muzaffarnagar district.

For almost a decade, the Tikaits have been trying to reap the political harvest of the popularity the BKU had achieved under the leadership of their father, but all their attempts so far have failed miserably. It is widely believed in Muzaffarnagar and nearby districts that with the help of the new alliance the Tikaits, particularly Rakesh Tikait, may be getting ready to test the political waters once again. It is too early to know whether the new alliance will actually help them get a political foothold, yet recent events show they have already become part of the brutal polarisation politics to which UP has been subjected for the past couple of months.

BKU spokesperson Dharmendra Kumar denies these allegations, asserting that ‘there is no nexus between the BJP and the Tikait brothers’, and that the sons of Mahendra Singh Tikait have ‘no political ambitions’. He insists, however, that ‘the murder of two persons belonging to the Jat community at Kawal village on 27 August and the administration’s failure in nabbing the culprit—and not the provocative statements made at the Mahapanchayat on 7 September—resulted in communal backlash in the region.’

Whether the Tikait brothers have any political ambitions or not, they have plainly allowed themselves to be used by those trying to communalise what was essentially an isolated crime. Also if the murder of two persons belonging to the Jat community was the trigger, the communal flare-up would have started immediately after the crime and would not have waited till the Tikaits’ Mahapanchayat on 7 September.

There are enough indications that ahead of the Lok Sabha elections due early next year, there have been plenty of attempts to communally polarise the electorate in UP. More than 50 clashes have taken place in the state over the past year or so. Nearly a dozen of these were recorded as major communal riots.

Even in districts like Muzaffarnagar, Meerut and Shamli, efforts were being made for quite some time to create communal polarisation. In June last year, for example, there was a major communal clash in Muzaffarnagar in which 20 persons were badly wounded. In April and July this year, Meerut experienced two phases of communal violence in which two persons were killed. A mere couple of days before the present conflagration, there was a conflict between the two communities in Shamli on 3 September during which one person was killed and ten others were injured.

That the BJP has been trying to foment disturbance becomes clear by the fact that its leaders on the ground have been letting go of no opportunity to add communal colour to even the smallest of events involving two communities. Take, for instance, the Mahapanchayat of Jats that took place at Talesra village in Aligarh district on 18 August this year. The meeting had been called following a dispute arising from the elopement of a girl belonging to the Jat community with a boy of the minority community. Leaders of various political parties were present at the Mahapanchayat, which was attended by nearly three thousand people, mostly Jats.

‘BJP district president Devraj Singh tried to communalise the issue,’ says Suman Sharma, a resident of nearby Bhogpur village, who was also present at the meeting. ‘The BJP leader started saying that Muslims were taking advantage of the situation because Hindus were not united. He kept on exhorting Hindus to get united against the threat being posed by the Muslims.’ Finally, the Maha-panchayat resolved to boycott Muslims in the neighbourhood, she added.

Somehow, the situation did not deteriorate in Aligarh. But in Muzaffarnagar similar exhortations following an isolated crime involving members of two communities have resulted in such grave communal conflagrations that they have engulfed neighbouring districts and have spread like wild fire to rural areas.

In fact, of all the communal riots the state has witnessed in the past year or so, the present one in the western districts is by far the most severe and widespread, involving the maximum casualties and loss of property. While Muslims account for 18 per cent of the total population of UP, in the western districts, they constitute over 30 per cent of the population. Barring extremely localised instances, the Jatland has mostly remained free of major communal flare-ups. Only in the early 1990s, around the time the Babri Masjid was demolished by Hindu communalists, were there major communal disturbances in the region.

Even in those testing days, Mahendra Singh Tikait firmly refused to be swayed by communal forces. That his sons are extending a helping hand to those communalising the environment in Muzaffarnagar now is, therefore, seen by many as a rather unusual development, not in keeping with the BKU’s past.

‘Never during his life-time did Tikait ever align with the BJP. Both Jats and Muslims used to attend his public meetings,’ says a Muzaffarnagar-based leader of All India Kisan Sabha, Ved Prakash Ved. ‘It was a normal practice in his meetings that while some Hindus used to shout “Allaho-akbar”, a group of Muslims used to raise the Hindu religious slogan of “Har Har Mahadev”. Even when the BJP tried to show its sympathy to him following his arrest by the Mayawati government in April 2008, he maintained his secular image by staying away from the Sangh Parivar,’ he adds.

Tikait, who founded the BKU in 1986 as a peasants’ organisation focusing primarily on sugarcane prices, shot to national fame in 1988 when thousands of his supporters from western Uttar Pradesh filled the expansive India Gate lawns of Delhi. For a week, they lived there, cooking their meals and bathing in the open. The middle classes frowned at the chaotic disarray that had broken out in the heart of the city, and the government was at a loss to cope with the sudden influx of such a large number of Jat peasants into the well-ordered nerve centre of the capital.

Even on the occasions when he showed some inclination toward VP Singh’s Jan Morcha in the late 1980s, or the Janata Dal in the early 1990s, or even Congress in the late 1990s, formally, he continued to claim himself and his organisation apolitical. It was only at the behest of his son Rakesh Tikait that he agreed to start a political wing of the BKU, called Bharatiya Kisan Dal (BKD), ahead of the Lok Sabha elections in 2004. The party fielded nine candidates in that election, all of whom failed miserably. In the 2007 Assembly polls, Rakesh Tikait contested from Khatauli, but lost his deposit despite tacit support from the Congress.

In April 2008, following his casteist slur against then Chief Minister Mayawati, Mahendra Singh Tikait was arrested and a case filed against him under the Scheduled Castes and Scheduled Tribes (Prevention of Atrocities) Act of 1989. Following this, both the BJP and Mulayam Singh Yadav of the Samajwadi Party expressed their solidarity with the BKU chief. Thereafter, the Tikaits started shifting their allegiance to Mulayam, though the BKU chief never openly admitted the nexus.

This remained so till his death in May 2011. For over a year, his sons continued the same way. But around the end of 2012, the Tikait brothers’ disenchantment with the SP started growing. A senior SP leader says: ‘We want to maintain a distance from Tikait brothers due to their political ambitions.’

Observers believe that the Tikait brothers’ unmitigated failure in the polls and their inability to draw anything substantial from their ties with the SP have finally led to their drift towards the BJP. Whether they can manage a successful turnaround in their political fortunes depends not only on the manner in which Jat politics unfolds in the months to come, but also on the BJP, without whose help the Tikaits would quickly collapse.

Whatever the case, the active role of the BJP and other members of the Sangh Parivar, combined with the SP government’s failure to act on time—or, sometimes, at all—have created a situation in which the two parties look like mirror-opposites of each other. The insecurity and fear on which the rival political sides seem to be feeding are likely to be intensified as the 2014 Lok Sabha polls approach. In the months ahead, as the BJP enters into a do-or-die battle, especially in UP, the good sense of the people here is set to be put to a harsh test.