The Congress continues to spin the news in favour of the Gandhis, but why do TV networks let it? 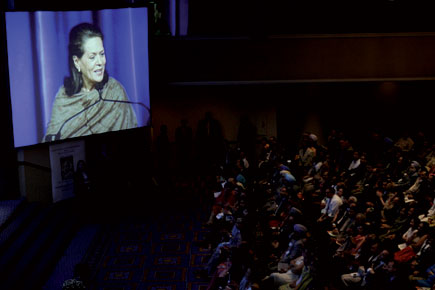 The Congress continues to spin the news in favour of the Gandhis, but why do TV networks let it?


It was in 2005 that I had my first brush with the dangers that confront every beat journalist covering the Congress party. An electoral verdict that year had given the NDA the numbers in the Jharkhand Assembly. Yet, Sonia Gandhi’s handpicked Governor Syed Sibte Razi had invited the Congress-backed Shibu Soren to form the state government and given him nearly 20 days to prove his majority—which was enough time to cobble together a government by means both fair and foul.

Razi’s constitutional impropriety came in for withering criticism from both the opposition and media, with even the Supreme Court stepping in to advance the date for the confidence vote. But just as criticism mounted, word went around that Sonia Gandhi was ‘unhappy’ with the Jharkhand Governor (the ‘unhappy’ High Command later shifted him to Assam, where he was subsequently fired after the CBI booked his Jharkhand staff for corruption). But this new ‘angle’ had passed me by, though most of my other reporter colleagues had already changed track. Just as I was gearing up for another ‘live’ report from in front of Mrs Gandhi’s residence, my boss literally stood before me and ordered me to spin the story around ‘Sonia is unhappy’ as a theme. I was left with little choice. Sonia had not issued a statement. Yet the story had irrevocably changed. The next morning, even the print media was full of the same spin.

I realised what I should have known earlier: for the beat reporter, it is simply not possible to exercise independent judgement while covering such events. The person on the ground does not shape the news, at least not in the TV broadcast media.

Stories impacting Sonia’s image are carefully choreographed right at the top, at the level of promoters and editors who are on first-name terms with key Congress functionaries such as Ahmed Patel. But Patel, the consummate spin doctor, also has a line with beat reporters; they need each other in the demanding 24×7 news cycle where a single ‘untutored’ line could damage the Congress President’s image. It is a tradeoff that works well for both. While the lowly reporter can impress his bosses by claiming he has knowledge of closely-held developments, Patel gets to ensure that Sonia’s image remains unsullied.

And if you work for a friendly channel and scrupulously adhere to the rules of the game, he could spring a surprise or two by gracing your marriage celebrations—not alone but with Congress Vice-President Rahul Gandhi. Recently, to the utter surprise of journalist colleagues, both made an appearance at the marriage celebrations of a ‘lowly’ Congress beat reporter, whose stock was sent soaring among his network bosses.

It has also assured him plum reporting options, including (maybe) a trip with the PM on his next foreign visit. When it comes to reporting on the Gandhis, this is precisely how much of the electronic media functions.

At the prominent TV network where I worked covering the Congress party, there was a whole army of ‘Congress reporters’. Some reported in the mornings and afternoons (‘downtime’), while others only reported in the evenings (‘primetime’).

‘Insignificant’ low-impact reporters like this writer were simply prised out of the field without any notice, especially if a ‘big’ story had to be covered. But this was not all. There were those who were handpicked to report Congress Working Committee meetings and special occasions like an All India Congress Committee (AICC) session. I was not sent to cover the Hyderabad AICC session in January 2006 despite Congress being my ‘prime’ beat. I was given no reason; only a mail arrived from my editor by way of information to the bureau.

Finally, there were those who filed field reports from Amethi and Rae Bareilly with some of the stories even finding their way onto the Congress website. I covered the party for over a year, but was never allowed to report from either of the constituencies. Once again, I was given no reason for this.

Eventually, I was shifted off that beat. A mail arrived one fine day saying that my beat had been changed. The chief of bureau, who I have no reason to doubt, later told me that she really fought hard to retain me as a Congress reporter. But the editors would not listen, and she was given no reason for the switch. If they had said I was incompetent, it would have been another matter, but they did not.

Nothing has changed over the years, my friends and colleagues on that beat tell me. At the end of the day, if there was no ‘Ahmedbhai’, the Congress would have to invent him, if only to spin doctor the ‘news’. That’s because the party’s first family is an anachronism in the age of modern media. The Gandhis remain remote and inaccessible.

The author is a former TV journalist who now teaches at Jamia Millia Islamia, Delhi