The 41-year-old Gandhi as Congress Working President? The murmurs have begun again 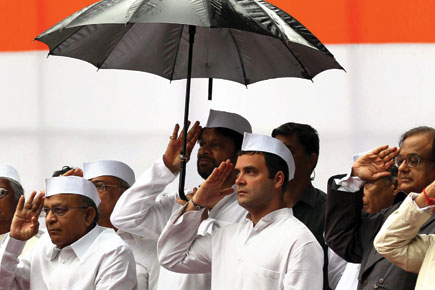 The 41-year-old Gandhi as Congress Working President? The murmurs have begun again


Rahul Gandhi is a somewhat changed man, and a busy one at that. Events of the last few weeks show that he is less reluctant to shed his reluctance to take charge of affairs of the Congress party. That does not mean that he is willing to take the bull by its horns and join Manmohan Singh’s government. But he is willing to take upon himself a bigger role in party affairs (and governance), in formal recognition of which he may soon—in the next few months—find himself anointed Working President of the Indian National Congress.

Despite opting not to hoist the national flag in place of his mother, Congress President Sonia Gandhi, at the Congress headquarters on 15 August, Rahul Gandhi has been at the forefront of managing party affairs and taking decisions with the party’s top brass. He has been seen in Parliament, at party functions, and, most importantly, attending meetings with top party leaders, including Prime Minister Manmohan Singh.

After returning from the US, where his mother is convalescing after a corrective surgery for an undisclosed ailment, Rahul showed signs of ensuring regular Lok Sabha attendance as well. He had been missing since the first day, 1 August, of the Monsoon session of Parliament. On 4 August, Congress leader Janardhan Dwivedi announced that Sonia Gandhi was ill and undergoing surgery abroad that would keep her in hospital and away from party affairs for three weeks or so. Her family was with her, and that is why she and Rahul had not been able to attend the session’s start. It was also announced that the Congress President had appointed a four-member committee—that included her political secretary Ahmed Patel, Dwivedi, Defence Minister AK Antony and Rahul Gandhi—to look after party affairs in her absence.

Senior Congressmen such as Prime Minister Manmohan Singh, Finance Minister Pranab Mukherjee and Home Minister P Chidambaram, presumably, are too occupied with running the Government and doing legislative work in Parliament to spare time for party affairs. They are not on the committee.

Of the four who are, the most attention has been lavished by observers and party workers on Rahul Gandhi, and for good reason. The Congress General Secretary’s inclusion in the group is the first big sign that the long-expected leadership transition from Sonia to Rahul has begun.

Sources within the Congress point out that there were murmurs in the party even at the start of 2011 about Rahul’s being appointed Working President. This was in the context of his apparently increasing involvement in party affairs, particularly its preparations and pitch for the Uttar Pradesh Assembly polls due in 2012. At that time, however, the murmurs petered off once Rahul’s reluctance to disturb the party hierarchy, or take on any weightier responsibility, became clear.

The idea of a working president has made a comeback since. Officially, the Congress organisational chart has no position with that title, but in the past the party’s High Command has appointed working presidents in a few states for ad hoc purposes like giving the party an electoral boost.

“Now, again, after the Congress President’s surgery, Rahul is being asked to take on a larger role,” says a Congress Member of Parliament considered close to the leader, “This time, he is not as reluctant, as you can see. The coming few months are going to be interesting.”

Of interest already is Rahul Gandhi’s presence in Parliament nowadays, given that his attendance record during the 15th Lok Sabha so far has been only a little above 40 per cent, even as other MPs average over 70 per cent. On 16 August, he held a half-hour meeting with Mukherjee and Chidambaram, as Anna Hazare’s arrest rocked Parliament and forced adjournment upon adjournment. The previous day too, immediately after the Independence Day celebrations at the Congress’ 24 Akbar Road headquarters, Rahul Gandhi had held a meeting with top leaders including the PM to discuss, among other issues, the social activist’s agitation that was to begin again the next morning.

Rahul Gandhi and Manmohan Singh went into a huddle again once it was clear to the Government how it had made a complete mess of the Anna Hazare affair. The two were earlier part of a meeting of the Central Election Committee to select party candidates for the UP Assembly election. At the meeting, which was attended by the general secretary in-charge of the state Digvijaya Singh and UP state unit chief Rita Bahuguna Joshi (among others), the Congress cleared over three dozen names for the polls. Breaking away from precedent, the party hopes to declare its candidates months before the actual polling, as part of Rahul Gandhi’s strategy for UP. The idea is to allow Congress candidates enough time to prepare for the electoral fight.

An earlier sign of Rahul Gandhi’s willingness to adopt a higher profile outside his parliamentary constituency of Amethi came on 29 July, when he inaugurated a memorial in Delhi dedicated to Guru Tegh Bahadur, the ninth Sikh guru, along with Delhi’s Chief Minister Sheila Dikshit. The Delhi government, though, had to wait several months for his acceptance of its invitation. The memorial’s foundation stone had been laid by Sonia Gandhi in 2004, and the nearly-12 acre complex near the Delhi-Haryana border was ready back in 2010.

Rahul Gandhi used the opportunity to lavish Sikhs with praise. “Wherever you Sikhs go, all over the world, you make India proud,” he said, directly addressing members of the community. This was all the more significant because of the uneasy relationship that Sikhs have had with the Gandhi family since the anti-Sikh pogrom of 1984 that followed Indira Gandhi’s assassination. The reconciliation process has been long and riddled with sensitivities that have needed to be negotiated with care.

Before UP goes to the polls, Assembly elections are scheduled in Punjab early next year, and the Congress hopes to upstage the Shiromani Akali Dal-led NDA government there. If Rahul Gandhi is to take on a larger role in the Congress’ scheme of things, it makes eminent sense for him and his party to devote attention to every election that comes their way in the lead-up to the next Lok Sabha election. It’s not about Amethi anymore. It’s about all of India.