It has no balance sheet, but talks balance. It has no earnings, but forecasts electoral dividends. It is an exercise in management, but what it can manage is an interesting question. Here’s the team that runs the leader’s show 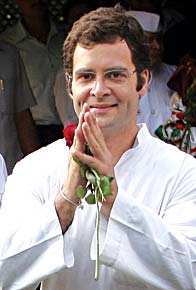 It has no balance sheet, but talks balance. It is an exercise in management, but what it can manage is a question. Here’s the team that runs the leader’s show


In this season of Congress insecurity, as allies go their own way to leave Congressmen jittery over their chances of returning to power, it’s hard to find anyone smiling in the grand old party. Unless, of course, they’re on camera. But look where cameras are forbidden, and you see them. They’re young. They’re cheerful. And there’s a jauntiness in their manner they seem to have caught from their leader: Rahul Gandhi, scion of the Nehru-Gandhi dynasty. Call them Team RG.

For them, the future is what counts. At 38, Rahul Gandhi can afford to be patient. “I am still young,” he recently said, with the sort of loaded pithiness that has become so characteristic of him. And in his view, short opportunistic alliances to gain power have weakened the party. “We would have liked alliances with Mulayam Singhji, Laluji and Paswanji to keep the secular vote intact, but their attitude disappointed us. The party will only benefit from going it alone in the long run,” explains Congress General Secretary Digvijay Singh, who is a close Gandhi advisor on realpolitik. “The party went through a series of flipflops after 1991, supporting one party or the other, and that proved disastrous,” he adds, “The result is that we have to start building it from scratch in certain parts.”

Slow change, that will be, for the long haul. But the databanks being monitored and spreadsheets being poured over by Team RG do have a message with a hint of fast pace: this is a management project. And Rahul Gandhi Corporation has its work cut out. It must deliver a bigger, better and more confident leader.

For observers, the point to note is that the strategy for shaping the party’s future is not being devised at 10 Janpath, but at Rahul Gandhi’s house, 12 Tughlaq Lane. “Mr Gandhi is not in a hurry. He says we have a 20-year gameplan and that his goal is to tap the youth,” reveals a close aide.

Ironically, the fast emerging power centre is located on a street named after a dynasty brought down by its last scion Muhammad bin Tughlaq’s futuristic ideas. Back in the 14th century, this sultan dreamt of a pan-India sultanate, launched token currency, and shifted base for better strategic control. Large-scale counterfeiting, famines, opposition from the orthodoxy and a rebellion jeopardised his grand plans.

Rahul Gandhi too has brought in ideas considered out-of-sync with the times. The emphasis on youth has been just the start. Team RG’s first task was to rejuvenate the Indian Youth Congress (IYC) and National Students Union of India (NSUI). Since September 2007, when Rahul Gandhi as Congress general secretary took charge of the two units, some one million odd new members have been signed up. “We expect to touch a figure of two crore by the end of the drive,” says IYC President Ashok Tanwar.

The Congress has never seen anything like 12 Tughlaq Lane before. “The functioning of the office is completely professional,” says an aide of Rahul Gandhi. Take, for instance, his trip to Puducherry on 25 March. The IYC’s local chapter’s schedule for the leader’s visit was found to be clashing with his other engagements. An email was zipped across by the local unit to Tanwar’s office, which forwarded it pronto to 12 Tughlaq Lane, where Sachin Rao, who looks after youth organisations, checked with Kanishka Singh and got back to the IYC within minutes.

Kanishka Singh is 32 and a Wharton MBA. The son of Rajasthan governor and old Rajiv Gandhi associate SK Singh, he quit his job as an investment banker with Lazard Freres & Co in New York to join the Congress. In an early-2004 article drawing parallels between Indian general elections and American presidential polls, Kanishka Singh had likened Sonia Gandhi to John Kerry and predicted wins for both. He was proven half right, the appropriate half, and has been an integral part of Team RG since.

In another essay published in 2005, Kanishka Singh pushed for doing away with the gerontocracy that rules India in favour of dynamic leadership. He needn’t have been specific at all, and his influence on Rahul Gandhi, the exemplar of dynamism in the Congress worldview, has not flagged a bit. Kanishka Singh also prepares the young leader’s daily schedule and clears appointments. “He is Rahul’s Man Friday,” says a well-informed source, “The real shadow who goes with him everywhere and sits on the seat next to him in the aircraft on all official trips.”

The team’s management wonk, however, is Sachin Rao, who is closer to the boss in age. He was in the business of software solutions before getting an MBA from Michigan Business School in corporate strategy and international business. A project with management guru CK Prahalad turned Sachin Rao’s interest towards poverty and the idea of looking at the Bottom of the Pyramid (BoP), the vast base of India’s socio-economic structure, as a viable opportunity left ignored. After a couple of farm sector projects with multinationals, he joined the Centre for Civil Society in Delhi, and made it his mission to confront Indian reality. Soon enough, Sachin Rao was spotted by Rahul Gandhi, whose own exploration of ‘real India’—remember the Dalit woman’s hut in Amethi and the headlifting of bricks with labourers in Rajasth—appears to have drawn some inspiration from this.

Not everyone in the Congress is pleased. When Akhilesh Das, Rajya Sabha MP and former minister of state for steel, quit the Congress in May last year, he blamed the “coterie around Rahul Gandhi” in his letter to Sonia Gandhi, Congress president and Rahul’s mother. The disgruntled Das went on to allege that Singh’s father was appointed Rajasthan governor despite being close to the BJP because of this next-gen proximity.

As it turns out, there are many others whom Rahul Gandhi relies on. Congress secretaries Jitendra Singh and Meenakshi Natrajan, both 37, work closely with him in overlooking the affairs of the IYC and NSUI, respectively. The former studied engineering in Germany and was twice the Congress MLA from Alwar before joining the team. He is now the party’s Lok Sabha candidate in Alwar. Meenakshi Natrajan did an MSc in Biochemistry and later a law degree from Indore before plunging fulltime into politics. She has been awarded the Congress ticket from Mandsour in MP, a seat considered tough.

Youth empowerment is the game. To Rahul Gandhi’s credit, the IYC and NSUI have started internal elections for the first time ever, and talent hunts have lapped up firebellied youngsters into the party. Of course, such hunts haven’t always gone down well. In Kerala, Rahul Gandhi’s talent pick as Youth Congress president, M Liju, had to be sacked within hours of his appointment as a measure to quell a local rebellion.

So, what is Team RG’s specific target for Rahul Gandhi? Management, after all, is about orienting an organisation towards a clear objective. On this, though, the team is coy—especially when there are party elders around. Rahul Gandhi is portrayed simply as Amethi’s MP, an MPhil in development economics and ardent student of Indian realities. He has done a couple of years of what the media has dubbed ‘Rahul’s Discover India tour’, with more to go.

Meanwhile, the relationships his father held have been renewed. Sam Pitroda, who ushered in Rajiv Gandhi’s telecom revolution and is currently chairman of the National Knowledge Commission, is a key advisor. Jairam Ramesh, who recently quit as minister of state for commerce, arranges most of these expert interactions, while Cabinet minister Mani Shankar Aiyar, a former IFS guy and Rajiv Gandhi’s school/college mate, helps him draw on expertise in the government, bureaucracy and field of diplomacy. The idea is to keep the PM-in-training engaged not only with the Indian heartland, but any change of heart elsewhere in the world.

On questions of how prime ministerial authority is effectively exercised, Rahul Gandhi is known to tap the shoulder of Prithviraj Chavan, minister of state in the Prime Minister’s Office (PMO). Few Congressmen doubt that this is a mere matter of incidental curiosity. But here, perhaps there’s an imprint that another alma mater, Harvard, might (or ought to) have left on the young Rahul Gandhi: never confuse the idea of authority with the authority of ideas. The irony of his address need not imprison him yet.