Pollution War: An Odd Fellow Gets Even With Delhi

It is politics, not science, that drives the AAP government’s pollution war 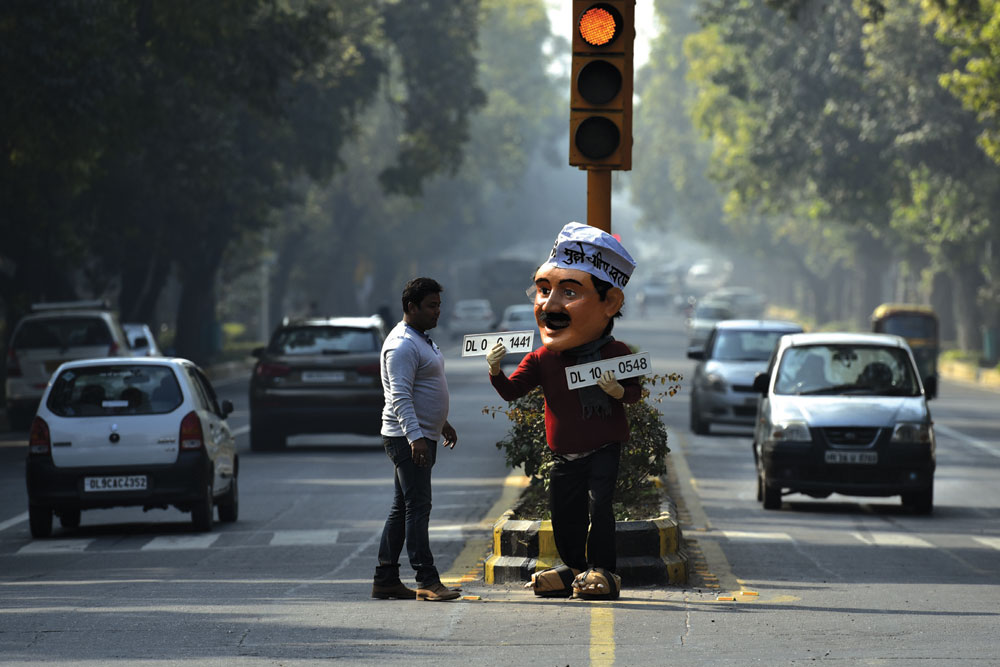 ASK ANY CAR driver about his experience of driving in Delhi these days and he is likely to give you a thumbs-up. Go to any of the ‘neck’ areas of the city—the Income Tax Office, for example, or the turns on Rao Tula Ram Marg—where traffic drives you nuts, and you will only see vehicles zipping by. You could say that this is the miracle of the odd-even plan of rationing roads in the capital.

First implemented for a fortnight in January this year, the plan allows odd- numbered cars on roads on odd-numbered days and even-numbered ones on the other days. That plan has now been implemented for the second time—for the fortnight beginning 15 April. There are multiple exceptions: women are exempt, as are a whole host of other road users. Bikes and scooters and auto-rickshaws are, of course, immune.

But before you conclude that this is a brilliant traffic management plan, hang on. The scheme was meant to fix Delhi’s air quality, dubbed as the worst in the world by the World Health Organization in 2014.

What gives the scheme the air of an experiment is the lack of any reliable data, or studies, that prove that rationing of traffic can lead to lower levels of air pollution. Two studies were carried out earlier this year, but their results contradict each other. Perhaps that’s the wrong word, since their focus and methods were very different.

The first study—by transport experts Rahul Goel and Pallavi Pant of Shiv Nadar University and the University of Massachusetts at Amherst, respectively—found that pollution was reduced by 6 per cent at most during the first two weeks this year, thanks to the odd-even rule. This conclusion was drawn by comparing air quality data from 2013 and 2014 reported by the Delhi Pollution Control Committee (DPCC)—specifically one of the most commonly tracked pollutants, particulate matter 2.5 or PM 2.5—on Sundays with the other six days of the week. Sunday was chosen for its low passenger vehicular traffic and if the rule was doing any good, the data would tell the story.

Instead, the maximum difference observed was 6 per cent, well below the ‘grand success’ touted by the Delhi government. These authors stated that ‘information about the total contribution of the transport sector to PM2.5 levels is not enough to devise effective pollution control policies. In order to design such policies for transport-related pollution reduction, it is imperative to quantify the percentage contribution of the different sources to ambient PM2.5 levels as well to contribute the relative contribution of different vehicle types to total transport- related PM emissions’.

It is not clear whether the state government carried out such studies. If it did, it’s not clear if the results were made public. Open reached out to the spokesperson of Delhi Chief Minister Arvind Kejriwal. He did not respond.

In contrast to this study, another one by Michael Greenstone and his colleagues from the Energy Policy Institute of University of Chicago found that air pollution fell by 10-13 per cent in Delhi during January this year. For their study, Greenstone and his colleagues compared hourly pollution data from December 2015, when the odd-even plan had not kicked in, with that from the fortnight in January when it was enforced. They found an appreciable dip in PM2.5 concentration between 8 am and 8 pm during this period.

These authors, too, sounded a note of caution when they concluded that, ‘While the odd-even policy reduced pollution during its first two weeks in effect, there are reasons to wonder about its ability to reduce pollution over the longer run. A natural concern is that the odd-even policy could easily be gamed or otherwise undermined. Further, Mexico City’s experience with the implementation of a similar policy suggests, it could even make pollution worse by encouraging households to purchase second cars that are old and very polluting.’

If scientific studies and data are one matter, anecdotal evidence is another. In the first odd-even trial, many car-owners evaded the rationing by getting hold of forged stickers that showed their cars as CNG-fuelled. In the second round, this has been tightened by greater centralisation in the issuing of such stickers.

That is just one issue. Another potentially far more serious, problem is that of households buying a second car to bypass the rule. Again, there is anecdotal evidence from car sellers that this is indeed taking place.

THIS IS JUST the second time that the odd-even system has been put in place and some of the contradictions, only hinted at earlier, are now pretty visible. In the past week, radio-cabs—now a part of the city’s transport network—had seen their ‘surge pricing’ rates shoot up by many multiples per kilometre. This is a normal solution to fix a demand-and-supply mismatch. In response, the Delhi government issued a warning to companies that operate radio-cabs that their licences would be cancelled if they persisted with surge pricing. The result: the number of radio- cabs operating on Delhi’s roads fell. So a solution ended up becoming a problem.

It is not as if the government is not aware of these problems. But the solutions it proposes will aggravate the situation. For example, at a function on air pollution on 19 April, Kejriwal made an interesting comment. He said that, “it is difficult for people who drive cars to switch to public transport. The bus aggregator policy is [aimed at drawing] such people to use public transport. The government will engage private players for the new service.”

Logically, the Chief Minister is right. Within the transport sector, buses have lower share of PM 2.5 emission (1 per cent compared with 5 per cent for cars). But here’s the problem: even if a large number of car users were to be weaned away to luxury buses, where would they be parked? In a city where land is scarce and expensive, who will buy this land, and importantly, pay for it? Once again, the Chief Minister’s ‘solution’ is likely to worsen matters. Kejriwal admitted that, “the Delhi Development Authority (DDA) is demanding Rs 4 crore per acre, which is too expensive. We have asked the DDA to lease out land at Rs 1 per acre.”

Anumita Roychowdhury, executive director for research and advocacy at the Centre for Science and Environment, argues that there is a positive link between reduction in traffic congestion and pollution levels. She says, “Most vehicular pollution takes place on the road or within 500 metres from road side. Even-odd rule lowers congestion and pollution associated with it. Lower commuting time reduces our exposure time to toxic fumes. If number of cars is lowered by 30-40 per cent it will reduce our direct exposure. ” Roychowdhury adds that one need not take an excessively bleak view of the even- odd experiment: “One needs to understand the logic behind the even-odd plan. It is an emergency action that has been taken to reduce, or shave-off, peak pollution in Delhi. It has come after two other steps. First, the creation of an air quality index and then a health advisory. It is not a permanent measure but an emergency measure that is taken when air quality deteriorates dangerously. This will have to be done along with other short and medium term measures.”

The Kejriwal government has consistently denied that there is any ‘politics’ behind choosing to target four- wheeled vehicles for the reduction of pollution within the transport sector. There may be some truth in what it claims, but the mixed results from the air pollution studies— which have not shown conclusively positive results—and the exclusive focus on cars, used largely by the middle class, points to something else. If Delhi is to have better quality air, then some restrictions on other categories of vehicles—such as two wheelers that far outnumber cars—are surely called for. In addition, as Greenstone has argued, some form of congestion pricing is needed instead of just rationing of roads.

But that is unlikely to happen under the Aam Aadmi Party government which has a fine sense of calculating political gain and loss.