‘Pink Revolution’ beneficial to whom?

Dazzled by the sheen of ‘dollars’, we do not perceive the hidden costs that come with meat exports 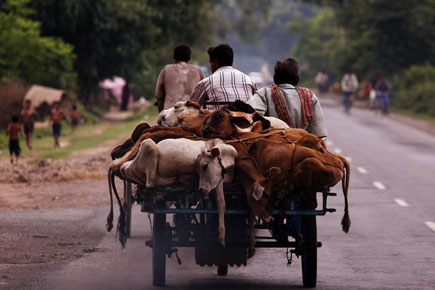 Dazzled by the sheen of ‘dollars’, we do not perceive the hidden costs that come with meat exports

Decades ago, Mahatma Gandhi declared, ‘The greatness of a Nation and its moral progress can be judged by the way its animals are treated.’

Today, India’s reputation is indeed judged by the way we treat our animals. We are the Number One in beef exports; i.e. in the plain and simple business of slaughter.

We treat ‘live’stock as commodities; instead of the sentient beings that they are. Dazzled by the sheen of ‘dollars’, we do not perceive the hidden costs that come with meat exports. We do not know that this particular export trade benefits just a select group of players. (The “Pink Revolution”, the colour of meat, a term given to the government’s meat export policy).

In recent times, countering the Sangh Parivar’s shrill calls, there have been articles extolling the “Pink Revolution” as ‘beneficial’ to the nation. These commentaries have surprisingly overlooked the real issues concerning the meat exports; and merely echo the equally strident voice of the powerful meat lobby. It’s time the public ‘hears the other side’.

We must note that the meat exporters in India are confined to an elite list. There are 45 registered meat-exporting plants, owned by just a clutch of people. The stakeholders extract every pound of flesh to keep their coffers flowing. The stakes are huge; and the beneficiaries very few.

In February this year, the Rajya Sabha Committee on Petitions (a non-partisan statutory body) in its 151st Report, comprehensively indicted the Meat Exports Policy; recommending a total ban on the subsidies and tax benefits to meat exporters, given the ‘monopolistic character’ of this business.

A cold-blooded analysis, and the Committee’s findings, show that the reasons for a rapidly declining buffalo population lies at the government’s door. The charge is severe from the dairy and farming sectors as well; who claim that the Centre’s lop-sided incentives to meat exporters, is directly linked to the decline in livestock; thereby impacting milk production. Add to that the unbridled smuggling of cattle across our porous borders; throw in the rising distress sales by farmers who cannot afford to maintain their cattle; and you don’t have to ruminate over who is the real culprit.

The brokers thus buy cattle dirt cheap; and make their cut; supplying the healthy ‘mal’, to the awaiting meat exporters. A major cause, therefore, for the depletion of livestock; is indeed the ‘Pink Revolution’.

A few ‘Dollars’ in exchange for a price

The Committee notes that meat exports provide only 1% of the country’s total foreign exchange reserves. The meat industry does not talk about the colossal negatives that go in to ‘produce’ the exports. Why on earth would they so incriminate themselves? The very nature of meat production leaves a trail of filth and waste. Slaughterhouse activities, on a large scale, for the purpose of export, invariably ups the ante when it comes to environmental degradation and human disease, denying the citizen’s fundamental right to a healthy and safe environment.

A fundamentally unsound aspect of the meat business is the slaughterhouse work. Like the manual scavenging ‘occupation’ which is shamefully prevalent in India till date, ‘slaughtering’ is another ‘job’ that defies description. Workers have to clean, stun, grab; remove the excreta, entrails, blood and flesh; while battling with terrified animals that bleed, bite and lash out desperately for their lives.

The U.S. Bureau of Labor Statistics, cites the slaughterhouse work as one of the most unsafe in the world. Gail A. Eisnitz, author of “Slaughterhouse”, comments: “A worker's chances of suffering an injury or an illness in a meat plant are six times greater than if that same person worked in a coal mine.” Indeed, there is no public awareness on this issue; of human beings, exposed to the brutality and degradation of this trade. Compelled to earn a living by killing.

The right to water is part of the right to life. However, countless Indians struggle to access this vital resource. The meat industry is a major factor in the excessive consumption and pollution of water : Each ton of beef produced, requires 16,000 cubic meters of water. “Astoundingly, the meat industry single-handedly accounts for more than three times as much harmful organic waste water pollution as the rest of the nation's industry combined.” states John Robbins in “Diet for a New America”. Yet, the Indian State reneges on its duty as a custodian of our natural and material resources.

The question is, “Should we then ban all water-intensive and pollutive industries?”

Meat exports not only guzzles water, pollutes the environment, exposes the public and the slaughterhouse workers to serious health hazards; but, more importantly, it’s life-line depends upon taking the lives of living creatures. In other water-consuming industries, the ‘raw material’ is not ‘life’. As US author, Jonathan Safran Foer asks : “Can the thinking be the same”?

Has anyone seen a truckload of ‘live cattle’ transported to the slaughterhouses? Layer after layer of petrified creatures lie cowering in conditions that would shame the holocaust’s ‘human cattle trucks’. The traders, violating every provision of the Animal Transportation Laws; transgressing all canons of humaneness.

There are certain ‘trades’ that are essentially repulsive and opposed to public policy or civilised thinking; like trafficking in women, or gambling. These ‘occupations’ are ‘Res Extra Commercium’; Latin for : ‘outside the realm of commerce’. In other words – ‘unclean’ or ‘abhorrent’. We must realise that ‘modernisation’ of old abattoirs is not a magic formula waving away animal and public welfare issues. Producing meat is a cut-throat business, and will so remain.

The fact is, we do not want to talk about this industry; about the untold cruelty and the enormous ecological damage caused by meat production. We are scared, if we talk of ‘cattle protection’, we will be dubbed ‘fundamentalist’, or ‘Hindutva’ .

Any government policy that violates any Constitutional provision, will necessarily come under the judicial gaze. Article 48 of the Constitution mandates that the State shall take steps to prohibit the slaughter of cows and calves and other ‘milch and draught’ cattle.

Mirzapur highlighted the immense gains accruing to the national economy from the service of live cattle. Dismissing the contention that ‘old cattle’ are unproductive, the Apex Court held forth, inter alia, on the benefits of organic farming; notably documenting the worth of cattle dung, and placing it at a higher value than the “Kohinoor diamond”.

The crux of it all

Article 51A commands all citizens to uphold the Fundamental Duties. While studying for the paper on the Indian Constitution, no law student would give this provision a glance. Today, we should realize the importance of this constitutional mandate. In the context of the “Pink Revolution”, at least three clauses in 51 A are germane to the matter:

Clause (f) to value and preserve the rich heritage of our composite culture; (g) to protect and improve the natural environment.. and to have compassion for living creatures; (h) to develop humanism. The Article 51A shows us the Gandhian way. The sum and substance, is the duty to uphold the humanitarian ideals that infuse Indian thinking. 'Satya', 'Ahimsa', 'Karuna’ 'Dharma'. Values that rise above community and sect. Principles that are not ‘Hindu’ beliefs, but form part of our ‘composite’ heritage. Referring to the essential characteristics of Indian culture, the Supreme Court opined: "For many centuries, Indian society cherished two basic values of life i.e., 'Satya' (truth) and 'Ahimsa' (non-violence)…”

Gandhiji held: “the more helpless a creature, the more entitled it is to protection by man from the cruelty of man.” The Mahatma’s sentiments resound in Mirzapur :“The weak and meek need more of protection and compassion.” …..“It is reprehensible to condemn cattle in its old age as ‘useless’ and send it to slaughter, forgetting its service to man.” Mirzapur ruled that the STATE is also a Citizen, and thereby it is enjoined to honour the Constitutional mandate of 51A.

But who can best elucidate Article 51 A and its relevance to the meat exports issue, than Justice VR Krishna Iyer? In his inimitable style, he declaims: “To hack, in manner most foul, helpless millions of living creatures, ecologically helpful to man and his healthful environs for a mess of business pottage stultifies the mandate of the Constitution to show compassion to living creatures, travesties the cultural testament from Buddha to Gandhi and involves the nation in health hazards by destroying Nature's balance and immunity system.”

Deeply concerned with the ramifications that abound from this industry, members from western nations are questioning the very raison d’etre of the meat business. Jonathon Porritt (CBE), a British Environmentalist (and a meat-eater himself), indicts the intensive meat production as : ‘a grotesque misuse of the earth’s resources’. He suggests there should be a “Statutory Warning” – exposing the meat trade for what it really is: “A moral outrage and a threat to ourselves, our planet’s life support systems, and to future generations.”

In a similar vein, Charles Kenny, writing in the Bloomberg Businessweek (March 31, 2014), calls for a ‘sin tax’ on excessive meat production. He cites India as an example of a vegetarian nation, but adds the rider that as the world gets richer, it eats and produces more meat.

This begs the question: We are an independent nation. But, is our mindset still colonial? Where is the need for India – with its ethical, constitutional, scientific, ecological and vegetarian ethos, to ‘catch up’ with some of the ills of the ‘developed’ world ?

The heart of the matter

The outstanding concern is that of the utter barbaric nature of this export ‘trade’. It is outrageous that an Indian State is responsible for this suffering for the last three decades and more; and is currently going full-throttle ahead. We talk of ‘Gandhi before India,’ or ‘India after Gandhi’; but what about “India should be Gandhi”? The Indian State has no legal, moral right to squander the Gandhian legacy. Fortunately, the Indian Supreme Court is on the qui vive (on the alert). Its recent judgment banning the cruel bull-cart racing ‘sport’ of Jallikattu, is a landmark on animal rights.

The Indian way of life is one of its kind. So is the Indian Constitution. Both are Sui Generis.

The inspiring words of Pandit Nehru come to mind: “It is important that we should have…. the material possessions of the world, that our people should have the necessaries of life. That is of the utmost importance: Nevertheless, a nation, and especially a nation like India with an immemorial past, lives by other things also, the things of the spirit.”

Indeed, it is for India to shun the pernicious meat exports and set the trend for the rest of the world to follow. We can talk of foreign exchange, nation’s economy, livelihood, employment, and other ‘monetary’ issues, till the cows come home.

(Mina Anand is a Chennai-based lawyer with Surana and Surana International Attorneys. The views expressed  here are her personal and in no way represent the views and editorial policies of the Open magazine)