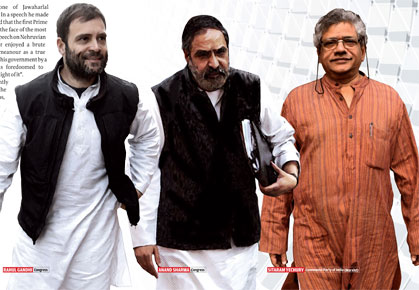 Tolerance of dissent was the cornerstone of Jawaharlal Nehru’s policy in Parliament. In a speech he made towards the end of 1985, the late President R Venkataraman noted that the first Prime Minister of India never capitulated on his famed values even in the face of the most vitriolic of attacks in the House. Venkataraman—who made this speech on Nehruvian parliamentary values when Rajiv Gandhi as Prime Minister enjoyed a brute majority in the Lok Sabha—recalled Nehru’s impeccable demeanour as a true democrat when the first no-confidence motion was tabled against his government by a former comrade, Acharya Kripalani, whose “resolution was foredoomed to failure by the arithmetic of seats, but Nehru was not one to make light of it”. Venkataraman remembered the occasion thus: “[Nehru] sat patiently through attack after attack, and then, before Division, answered the charges with every respect to his erstwhile fellow-warrior-in-arms, the Acharya, and to other Opposition leaders. Reference was often made to the ‘brute’ majority enjoyed by Nehru in Parliament. Well, Nehru could not have helped the numbers that the Indian electorate gave him. But strength in the seats which his party held never affected his equipoise. Nehru was not one to have courted any of the brutish implications of a majority.” No doubt, despite his majority, the late Congress Prime Minister believed in bipartisanship and promoted a culture of healthy debate in the House. He made it a point to be present in the Lok Sabha whenever senior members of Parliament spoke. He always listened patiently when opposition leaders like the late Syama Prasad Mookerjee, AK Gopalan and Hiren Mukerjee taunted him in Parliament over one issue or another. Nehru also congratulated young members who raised pertinent issues in the House. He used to attend Question Hour regularly. As Venkataraman pointed out, Nehru used to wait for his turn to give a stinging reply, but only after he had listened to what his rivals had to say. Again, as part of championing democratic credentials, he had no qualms about asking his Man Friday, the then Finance Minister TT Krishnamachari, to quit when his son-in-law disclosed in Parliament in the late 50s that Life Insurance Corporation of India had—as recommended by Krishnamachari—made an investment of Rs 1.24 crore in stock broker Haridas Mundhra’s ailing companies. While Nehru encouraged, in the words of the late former President, “frank, free and uninhibited expression of opinions and views”, Indira Gandhi, his daughter, was destined to destroy the democratic temper of Parliament that Nehru had fostered. She, as Prime Minister, was not only impatient with differing opinions, she also disliked the idea of Parliament that Nehru envisaged—one described by Venkataraman as “a free forum to articulate the voice of the people”.

Things took a turn for the worse in the decades that followed; irreconcilable differences and intense distrust came to the fore in national politics, a phase that saw rainbow coalitions take shape. Pettiness, arm twisting, blackmail tactics and deception became the new rules of the game. Malice towards opponents ran deep. In the 10 years that the Congress was in power from May 2004, the ruling coalition disallowed any debate, even on corruption scandals, and the opposition BJP zealously disrupted parliamentary proceedings. Now, the BJP-led Government at the Centre is ready for a debate on contentious issues, but the logjam persists. An unwillingness to evolve a consensus stands out starkly. As Nehru said, Parliamentary democracy demands many virtues. “It demands, of course, ability. It demands a certain devotion to work. But it demands also a large measure of cooperation, of self-discipline, of restraint..,” he had said. He knew that the democratic system that India had adopted was a tough one.

Certainly, there is a lot that the Government of the day can typically do to forge bipartisanship. And agreeing to engage in a debate is a reasonable first step, and it has agreed. But as the impasse continues in the Lok Sabha, hyper partisanship that has intensified since the new Government took over has put the Indian economy in danger. After several years of what foreign investors had described as ‘India fatigue’, marked by policy paralysis, there is now scope for hope. Foreign investors are showing a great deal of interest in seeing their money multiply in the country. But any failure now to ease business constraints could have far-reaching consequences. What investors expect of India, which is well placed to shrug off many problems that ail other economies, is the next set of economic reforms. Unless that is done, the country will fall badly short of funds for its much-needed infrastructure projects that could boost manufacturing.

Open lists a few parliamentarians who could take a tip or two from Nehru to revive Indian Parliament as an effective instrument of democracy—and to save the country from the brink of economic and political disaster.

The Congress party vice-president and Nehru-Gandhi family scion has been uncooperative on all issues to do with fast-tracking reforms, the key agenda of the current Government. For the simple reason of its being industry-friendly, he can’t see eye to eye with the NDA regime. Rahul Gandhi argues vehemently against getting rid of clauses in the Land Acquisition Act passed by the previous Government that could hobble the purchase of land for new projects. He also favours making laws far more cumbersome for India Inc. He is also hellbent on opposing the roll-out of a Goods and Services Tax (GST), which will allow hassle-free freight movement across inter-state borders.

The son of Congress President Sonia Gandhi seems to believe that flaunting a pro-Left, anti-industry image would help him win over a large section of India’s marginalised communities. Contrary to that perception, the 2014 General Election proved that people are no longer happy with mere entitlements, and instead want a larger share of India’s economic growth. The BJP came to power by tapping the aspirations of a huge majority who want to break out of traditional occupations and hitch their future to India’s development bandwagon. There are no signs yet that Rahul Gandhi’s effort to become the principal voice of the downtrodden has struck a chord. In fact, his anti-development slogans have not found takers even among farmers, who are keen that the next generation pursue jobs in the tertiary sector. Rahul Gandhi has not been too keen on Parliamentary debates either. He is seen as the biggest hurdle to any rapprochement that ends the ongoing Lok Sabha deadlock. During the term of UPA-II, he had once walked out midway through a Budget debate. Gandhi’s bias against industry has had a cascading effect in the Congress, with several party heavyweights vying with one another to display bleeding hearts.

A long-time member of the Rajya Sabha, this Congress leader rose to prominence in national politics in the 1990s and later became a loyalist of Congress President Sonia Gandhi. Though he had aggressively argued for reforms in his role as a minister in the UPA Government, he has lately been highly critical of the NDA’s push for reforms. As a UPA-II minister, Sharma had condemned the UPA-enacted land law, arguing that it would come in the way of industrialisation and urbanisation. While holding the Commerce and Industry portfolio, he had opposed his Cabinet colleague Jairam Ramesh and favoured easing acquisitions for big infrastructure projects. Now, ironically, as deputy leader of the opposition in the Rajya Sabha, he is at the forefront of an onslaught against the current regime’s plan to make land acquisition laws less rigid. Formerly a votary of economic reforms, Sharma is now often caught contradicting himself in the Upper House.

As Environment Minister in the erstwhile UPA Government, he had tried to bypass his own Prime Minister Manmohan Singh in effecting crucial laws in Parliament. Various sections of Indian industry have complained that he was blocking significant approvals related to big projects. Former Finance Minister Yashwant Sinha of the BJP had blamed Ramesh for being “singularly responsible for shaving off 2.5 per cent of the GDP” by not granting project clearances during his stint as a minister. Ramesh continues to be belligerent in his opposition to any policy shift by the new dispensation.

A self-confessed champion of the poor, this Rajya Sabha member who represents Andhra Pradesh has, however, been accused of a witch-hunt by at least one corporate group. Despite his avowedly anti-capitalist ways, Ramesh was quoted recently as saying proudly that “in less than 35 days, the Rao-Singh duo ushered in momentous changes in economic policy that transformed the country”. But when it comes to track-II reforms being pursued by the NDA, his opposition can only be termed fanatical.

The CPM general secretary has come under attack for behaving like a back- bencher in the Rajya Sabha, in which he represents West Bengal. Though he is known for incisive comments on a range of issues, his conduct in the Upper House has not been quite that of a top leader of India’s biggest Left party: he has been targeted by ruling party members for being more of a heckler and less of a parliamentarian who knows his Kaul and Shakdher well (MN Kaul and SL Shakdher are the authors of Practice and Procedure of Parliament, a bible for lawmakers).

This strongman of the Samajwadi Party, which is currently in power in Uttar Pradesh, and brother of party founder Mulayam Singh Yadav is wont to shoot his mouth off in Parliament. The conduct of this SP leader who represents UP in the Rajya Sabha mirrors the predicament of his party: constantly wavering on one issue after another. Even the rest of the opposition at the Centre cannot quite figure out where exactly the SP stands on crucial policy matters.

The Trinamool Congress leader and former quiz master has often prided himself in being highly vocal against the NDA Government at the Centre. Last February, he had created chaos in the Rajya Sabha when the Telangana Bill was being passed by tearing up sheets of paper and throwing the bits at then Prime Minister Manmohan Singh. He has been at his loudest best in recent months while attacking Prime Minister Narendra Modi over his ‘silence’ on the issue of “forced conversions” and ghar wapasi.

A perpetual storm trooper for his party, the Congress, Rao intrudes into the well of the Rajya Sabha at the drop of a hat, as if by force of habit. Time and again, the former Rajiv Gandhi loyalist and current member of the Upper House from Telangana has invited the wrath of the Chair and ruling BJP for disrupting proceedings at the slightest hint of what he sees as provocation.

Though he is the leader of the Congress in the Lok Sabha, he lacks the gravitas and networking prowess to lead a combined opposition attack on the country’s incumbent Government. A veteran parliamentarian with a good public image, this Karnataka politician has been forced to toe the party line: of indiscriminately disrupting parliamentary proceedings.

REBEL WITHOUT A CAUSE: Gaurav Gogoi

The young Congress leader and son of Assam Chief Minister Tarun Gogoi has attracted enough flak for being predisposed to interrupting the House even over minor issues. He had stirred a ruckus in the Lok Sabha when the debate on the Finance Bill started without the presence of Finance Minister Arun Jaitley, who was then on tour in March. His vocal cords remain just as overworked now, and he represents a group of young Congress leaders under the spell of Rahul Gandhi who are out to wreak havoc and act irresponsibly in Parliament.