Not One to Wage War

On 24 December, Dr Binayak Sen was sentenced to a life term on charges of waging war against the State, sedition, and for colluding with Maoists. I saw a very different man on my last visit to his house 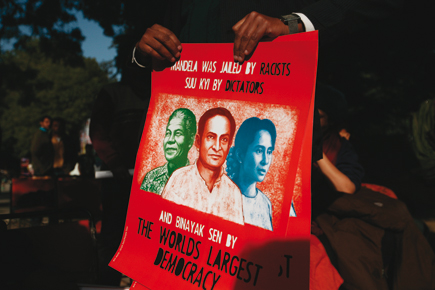 
I had called him a day in advance to check if anyone from his family would be in Raipur the next day. I knew his younger daughter Aparajita would be in Mumbai till the Christmas college vacation. “We three are in Raipur. We would love to see you,” Dr Binayak Sen had said, with a certain higher-pitch emphasis on ‘love’. I arrived in Raipur the next morning at 7 am, and hesitated to go to the Sens’ residence at such an early hour while the sun was still struggling to make itself visible through the fog. But the cold winds had attacked my spine through the night on the bus from Jashpur, and I desperately needed some warmth. On my way to the Sens’ on a cycle rickshaw, watching the capital city of Chhattisgarh straining to usher in the new day, I found myself cutting back and forth to memories of my acquaintance with the Sen family. I had first met Dr Sen’s elder daughter Pranhita—a 25-year-old budding filmmaker—in May 2009 to interview her. The interview was published, and my relationship with the Sens had dropped root. It had strengthened in the past 18 months.

I rang the bell and waited. A minute later, there stood the man at the door, in his vest and pyjamas, looking confused. Soon realising it wasn’t the milkman, he hurried to unlock the bolts. He waited for me to drop the bag off my shoulders, and then wrapped his arms around me in a long embrace. After the cold night, I was home and warm.

Dr Sen’s wife Ilina walked into the room and the warmth was superfluous. I apologised for arriving at such an early hour. “I was up at 5.30 am, and made tea for Ilina,” Dr Sen said, while Ilina looked at him lovingly. “Tea or coffee?” Dr Sen asked. I said anything would do. “But give me some indication which of the anything you want,” he requested.

Sipping coffee, we began to talk of the government’s undue attention on the family—Ilina had been called an ISI agent in the Raipur sessions court the previous week, during the course of Dr Sen’s trial. The family had been through much in the past three years; controversies seemed to litter their path like glass marbles. I joked only Rajinikanth could intervene, given his unusual powers to sway opinion. “Isn’t he the Tamil actor?” asked Ilina. Dr Sen and I exchanged a look of disbelief and laughed aloud.

Pranhita was up by now and soon we got into a girly banter. She wanted to see how much my hair had grown. I loosened my bun, exclaiming, “Now, there I look like a woman!” Dr Sen, who was making breakfast next door, peeped in as I let my hair dance. Pranhita and I screeched like adolescent schoolgirls caught talking about boys.

Sometime later, I spoke to Ilina about getting my bus ticket to Nagpur. Dr Sen, meanwhile, was dressed in his jeans and kurta, ready to go to court. The good doctor’s relationship with the courts and cops began in 2007, when he was arrested on charges of being a Maoist sympathiser. Now, as he paced about the house, he looked confused: “Who will buy the ticket? How will Ashwin buy it if he has to be with me in court? But he can’t buy it later at noon; tickets might not be available then, and it is already 10.30.” Ilina interjected to allay his doubts. He turned to me, “Won’t it be cold on the bus?” I assured him I would be fine. It was finally decided that Ashwin, a law student who has been helping the family with minute details of the case, would buy the ticket on the way to court.

We had a lunch of Bengali fish curry and rice grown on their own farm on the outskirts of the city, while watching an animation film on TV. The discussion among us women (with their dogs Safia and Dottle playing earnest listeners) veered to reality shows on TV, and the palpable surge in India of a generation devoid of soul.

Dr Sen returned from the court and got into a discussion with Ilina and another guest about the case. Meanwhile, I poked around the many bookshelves that house everything from Victorian to Bengali literature, to medical journals, to all manner of human rights reports. I remembered what Pranhita had told me when we first met in 2009, a few days before her father would be released on bail: “The Chhattisgarh police took my sister’s algebra notebook; they suspected it might contain Maoist code!”

The sun had set and the dogs were trying to find a comfortable warm corner. I prepared tea for Dr Sen and Ilina, while they began to arrange the papers for the court the next day. “You are staying tonight, right?” Dr Sen asked me suddenly. I managed a smile and shook my head. Ilina was on the internet, looking for citations to be used from a decades-old case. Fifteen minutes and a few phone calls later, she’d found what was needed. Dr Sen left the TV remote—he was trying to fight sleep while watching news updates on the latest developments in the 2G scam—and ran to see what Ilina had found. As I stood over and watched, Dr Sen put his hand on Ilina’s shoulder and said with a proud beam on his face, “Among other nice things, my wife is also an internet expert.”

Dinner followed, and I began to gather my stuff to catch the night bus. Ilina noticed I was sticking my nose into a book whenever I could, and asked me to just take it with me. Mother and daughter decided to drop me to the bus stand. “Bye, Baba. Take care of yourself,” I said, and he embraced me in a ring of safety and love, for one long moment. “When do I see you next?” I shrugged my shoulders.

“Come back soon or I will fall asleep and won’t be able to open the door,” he shouted out to Ilina as she descended the staircase. I looked back to see him one last time, not knowing that ten days later, he would be made to walk into jail once again. “They will be back in just ten minutes. Please don’t fall asleep,” I said. “I was just joking,” he chuckled.I hugged Ilina Ma and Pranhita as I walked towards the bus. The gush of cold wind was unbearable.