Nobody Hits a Lady

The national outrage over Bengal Chief Minister Mamata Banerjee’s handling of satire is plain naiveté. Didi knows better than to ignore such timeless instruments of destruction, particularly when she is sure to get away with her counter-offensive 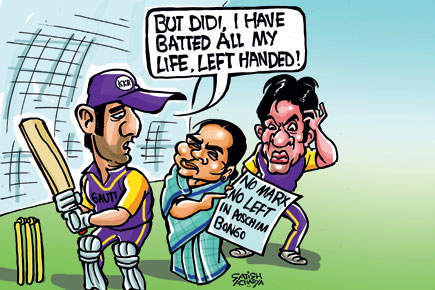 The national outrage over Didi’s handling of satire is plain naiveté. She knows better than to ignore such timeless instruments of destruction.


It is ridiculous how the so-called educated, liberal mind works. Granted, nothing stops us from taking sides. We can defend our right to forward a cartoon on email. We can back the content of that cartoon. We can have nightmares about Mamata Banerjee’s motives, methods and manias. We can also get a life if we believe she refuses to have one.

But must we accuse West Bengal’s Chief Minister and her aides of overreacting, that too, to a professor, of chemistry? Must we call her ‘insecure’ because she saw a conspiracy—political, because she is a politician—in the act of circulating the aforementioned cartoon? Must we also insist that the cartoon was innocuous? Must we always underestimate her?

For all our so-called education and liberalism, Mamata, for once, knows better. She knows that cartoons are a form of satire, an offshoot of Dionysian traditions that date back more than 3,000 years. She knows that satire, in its earliest form, was an impromptu magic curse hurled by Greek performers of fertility rituals in their phallic chants. Not for nothing has her police force invoked a section of the Indian Penal Code that deals with ‘outraging a woman’s modesty’.

Mamata knows that satire is not to be trifled with. Nearly 2,800 years before she became Chief Minister, Greek poet Archilochus killed his fiancée Neobule and her father Lycambes with good old satire. Ancient Arab tribal poets accompanied armed troops to the battleground spewing satirical curses. Their Irish counterparts used the same oral weapon to destroy crops and dry up milk. And yet, we called it paranoia when Mamata Banerjee saw in the professor’s satire a potent conspiracy and sought to defend her regime of ma-mati-manush against it.

For a staunch ‘anti-red’, Didi is deceptively well-read. Growing up, she might not have had access to Juvenal or Horace, but she must surely have come across pamphleteer Jonathan Swift and his nauseatingly dangerous solution for Irish poverty. Swift, in 1729, modestly proposed that ‘a young healthy child well nursed, is, at a year old, a most delicious nourishing and wholesome food, whether stewed, roasted, baked or boiled’ and would fetch a good price in the market.

If only the clamouring liberals had paused, Didi’s supporters would have told them how she shuddered to imagine the despicable depth to which Swift could have plunged had the English not meticulously discouraged the tradition of satire by burning all ‘lampooning texts’ during the Elizabethan era that preceded his A Modest Proposal. By upping the ante in time, Mamata is only defending Bengal, and indeed the country, against future onslaughts.

But thanks to us, the thankless, Didi never gets enough credit for being the good political student she is. A few months before she became one of India’s youngest ever MPs in 1984, her then role-model Prime Minister Indira Gandhi had got a particular issue of The Economist confiscated upon arrival at Indian airports. So swift was this crackdown that not a single copy was delivered in India.

Kevin Kallaugher aka KAL, the magazine’s devil-turned-cartoonist, had portrayed Mrs G as a menacing, four-armed goddess of sorts, with a pair of monstrous eyes, a snake necklace and an ample belly. Trampling over Sri Lanka, this cartoon avatar of Mrs G held a bag of money and dagger in two hands, while the other two squeezed a turbaned fellow and an aam admi. The sensible Prime Minister that she was, Indira Gandhi could not have taken any chances.

If her role model was not enough, Didi’s arch enemies also had a timely lesson for her. In the run-up to the last Assembly polls in West Bengal, painter Shuvaprasanna, handpicked by Didi as head of the Indian Railways’ passenger amenities committee, had exhibited a satirical version of The Last Supper in Kolkata. The canvas depicted CPM Politburo members, their left hands missing, seated grimly around a corpse that resembled Jyoti Basu on a table draped in a red cloth, under an upturned party symbol on the wall. Alarmed by this ‘malicious, distasteful, defamatory and insulting’ painting, the Left leaders had rushed to the Election Commission seeking retribution.

Mamata does not get credit for avoiding bad influence either. Only this February, a cartoon in The New York Post by Sean Delonas portrayed a chimpanzee being shot on the street by two cops, with one of them pointing out that, ‘They’ll have to find someone else to write the next stimulus bill.’ Forget poor taste, wasn’t that downright racist?

While quite a few resented The New York Post cartoon, Barack Obama, the hopeless liberal that he is, did not bother protesting. Post editor-in-chief C Allan nonchalantly defended his cartoonist’s “right to parody current news events”, and Delonas is still happily sketching and publishing away. It must have taken Didi quite some righteousness to swim against such decadent tides unleashed by none other than the US President.

Pity, we did not give Mamata her due even for appealing to educated liberals to use their superior brains for things more constructive. But then, of course, she must have had Maya Neyestani on her mind. In the last week of March, the Iranian cartoonist drew a few outstretched hands emerging from under two facing podiums marked with the flags of Israel and Iran. While these arms exchange roses, two angry men engage in a shouting match at the stump, their empty word bubbles in the shape of ‘WMD’. A triumph of hope, Neyestani’s work soon went viral on social media.

Not too long ago, an amateurishly morphed image of Mamata and her predecessor Buddhadeb Bhattacharjee in a cozy, arm-round-the-shoulder togetherness was doing the rounds online. The morphed image was a rather forced take on a popular still from an all-time Bengali celluloid hit (Saptapadi) and the most popular Bengali screen pair ever (Uttam Kumar-Suchitra Sen). Mamata did not object to it.

In her teens, Mamata confessed in a recent memoir, she was mortified after meeting her classmates’ boyfriends, lest someone spotted her doing so. Nobody acknowledged that in the constructive interest of affairs, her elder-sisterly public persona even swallowed the embarrassment of being part of a frame charged with such romantic overtones.

Gratitude is a rare virtue. That is why our ‘educated liberals’ are daring her all over the internet these past few days with a new surge of caustic, provocative cartoons. But Didi is not, and never was, against fun. However, the leader in her has always taken care to have fun responsibly. Dyspeptic Bengalis, she knows, are too celebral for their own good. They never get enough physical exercise, preferring to while their time away with books, surfing the net or addabaazi at tea shops. So Didi has taken it upon herself to set the standard for healthy humour. Remember how playfully she pushed the dhoti-clad Kolkata Mayor Shovandeb Chatterjee into a swimming pool during an official function?

Unfortunately, the hate-Mamata campaign has intensified after her party leaders forbade Trinamool sympathisers from marrying or socialising with CPM supporters. Call it political correctness or sensationalism, so readily do we make Didi a victim of her unabashed ways.

There is no record whatsoever of intellectual inbreeding putting a community’s biological future at risk. Moreover, the Trinamool Congress has barred only social contracts such as marriage, but ‘rapid integration’ through such anti-social means as political rape continues on the ground across the state anyway.

But for our liberal pretences, it would not be very difficult to appreciate the merit of this social embargo. Didi remembers how the state suffered in the absence of an effective opposition during the 34-year-long reign of the Left Front. This so-called fatwa is her think-tank’s bold attempt to preserve the still surviving opposition constituency that would otherwise get diluted by the influx of decidedly stronger Trinamool genes and intellect through marriage and over tea.

Pity, our liberal Didi-haters never grasp the larger picture. These wasted minds have not come to terms with the fact that intellectual criticism of her alleged insecurity will never force Mamata on the backfoot even tactically or temporarily. She knows she is the chosen one to defend Bengal against “the slanderous enemies of the people”. She has no choice. Ask ‘the people’ who had to eventually choose her for that role because destiny did so a long time ago.

What’s more, Mamata has never shied away from paying the price for being that chosen one. As a self-proclaimed political teen, she did not let the Naxalite movement or Emergency touch her. A daddy’s girl who cried all night, she always woke up to fight for her political dues. A homely Kolkata girl, she grew up to become a leader who believed “the right hand should not know what the Left hand does”.

More recently, as Bengal’s biggest mass leader during her 26-day fast against land acquisition in Singur, she was “terrified that instead of medical help”, the doctors “handpicked by the [Left] administration… would actually do something to disable me temporarily or permanently”.

Today, destiny’s chosen leader bears the burden of becoming her people’s destiny. These are not small sacrifices that she has made along the way. Not small enough to fritter away just because some ‘educated liberals’, quite a few among them clearly traitors, are suddenly crying foul. Today, Mamata is on a mission, ready to make more sacrifices, but rightfully protected by an astute sense of history and gender.

Remember Margaret Thatcher, former British prime minister and a popular target of vengeful satirists in her time? Cartwoonist Bill Deore once had a curious take on the Iron Lady. His Thatcher, all puffed up and armed with oversized boxing gloves, dared her unseen critics: ‘You wouldn’t hit a lady?’

Would you, now, you ‘educated, liberal’ morons? Once?