It’s a 999-page report. It took 17 years, cost Rs 8 crore and had 399 sittings with depositions from 33 Commission witnesses, 53 Central Government witnesses and 14 defence witnesses—100 in all. As one of those hundred, I want to have my say. In full. So here it is. 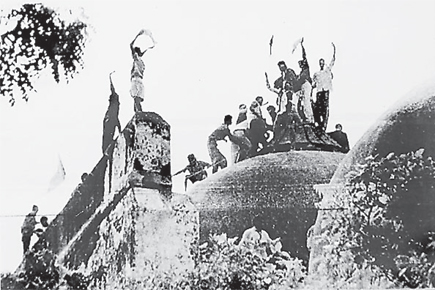 One of the 100 witnesses who deposed before the Liberhan Commission, the author makes a public deposition on what Liberhan did not get to hear.


I was Central Government witness (CGW) No 24, says the Liberhan Commission report on Ayodhya released this week. I never knew it all these years.

I did depose before the Liberhan Commission on Ayodhya. I thought the Commission had summoned me as a witness like any other reporter. But the ‘CGW’ tag has given a twist to my testimony. No, I did not make any mistakes in my affidavit. But the tag led to several omissions.

I don’t remember exactly when I was summoned to the Commission. It must have been sometime between 1994 and 1996. The Ayodhya issue was more or less forgotten. I too had moved on in life. I had left the Patriot Group of Newspapers and had joined another national daily. Several of my colleagues in the media, who were witnesses to the events leading to the demolition of the disputed structure, had appeared before the Liberhan Commission. One day, officials of the Central Bureau of Investigation (CBI) approached me, asking me if I was ready to depose before the Commission. I said ‘yes’. The CBI officials gave me a date for deposition in New Delhi. I reached there right on time. They showed me an affidavit and asked me to sign it. I read the affidavit. It alleged lawlessness, presence of senior BJP leaders when the demolition happened and complete failure of the state machinery, which led to utter chaos and violence throughout the state and subsequently the country.

I had no issues with whatever it was that the affidavit said, but I told the CBI officials that there were several facts that needed to be added in the affidavit. They said I didn’t need to worry as I could say it all when I deposed before the Commission. Plus, they were also submitting the cover story, ‘Operation Demolition: Brick by Brick’, that I had written as a reporter’s diary for the magazine Link. I felt assured and signed every page of the affidavit.

I did not notice whether or not the affidavit labelled me as CGW No 24. In fact, this would not have meant anything to me. I might have let it go as a serial number. I was under the impression that the Commission wanted my testimony as a reporter. Howsoever naïve I may sound, I understood my status for the Liberhan Commission as CGW No 24 about 17 years too late—after the report was made public.

The Commission had called me twice for deposition and cross-examination. During the cross-examination, I was asked to reply in ‘yes’ or ‘no’. The format was so tight that you couldn’t really explain anything. For instance, I was asked if BJP’s Lal Krishna Advani gave any speech from the dais inciting kar sevaks just before the demolition began. I said, “No, but…” The lawyer interrogating me immediately shut me up. “Just reply in yes or no,” he said. I felt throttled. I wanted to say that there were other senior leaders who had given inciting speeches in the presence of Mr Advani. This tight format of cross-examination and my status as CGW No 24 undermined several things which should have been enough to put the Central Government, the PV Narasimha Rao Government, in a spot.

I am not turning a hostile witness. I still swear by my affidavit as submitted before the Commission. The Liberhan Commission’s indictment of Atal Behari Vajpayee, Lal Krishna Advani and Murli Manohar Joshi as BJP icons who inspired the demolition, does not surprise me. What surprises me is that the Commission rescues the Central Government. In its conclusions, it says: ‘The Central Government was crippled by the failure of the Intelligence agencies to provide an analysis of the situation.’

Whereas in its introduction, the Liberhan report contradicts this: ‘The state and central intelligence agencies both were overoptimistic in their assessments and guilty of gross failure, or in the alternative they withheld crucial information and analyses from the Commission. In either case, the Commission not being the detective agency, was constrained to work with the fragmented information and disinformation presented to it.’ And here is an important intelligence input that the Central Government had. I did write this before the domes were brought down. But nobody bothered because I was CGW No 24.

According to this information, a group of young Sangh Parivar boys would arrive in Ayodhya from the Nepalganj area. They were trained to demolish the disputed structure and they were reaching Ayodhya early morning on 6 December 1992. These boys had taken a route via Ghonda and Baharaich and were proceeding towards Ayodhya via the Saryu river. I got the same information on 5 December 1992. All of us reporting on Ayodhya had filed stories that day that the Parivar would go for ‘symbolic’ kar seva. In addition, I had filed this story that the disputed structure is in danger, basing it on my military sources.

My status as CGW No 24 had its focus only on one thing: ‘How the state government apparatus failed in saving the disputed structure in Ayodhya.’ It did not let me say anything beyond this during my submission to the Commission.

Several political parties had sent their own observers to Ayodhya much before 6 December. I myself had seen Wasim Ahmed, former Rajya Sabha MP and a close aide of former Prime Minister VP Singh, in Ayodhya. The Sangh Parivar had no inkling of the presence of these observers. In fact, these observers were moving with us journalists because we had passes and access to all the Sangh’s activities and we helped them get first-hand assessments.

What were these political observers doing there? Were they waiting for the demolition of the disputed structure before they passed on their observations to the Central Government? There could have been some miscalculation, but the Central Government seems to have had enough indications that the situation in Ayodhya was extremely volatile. Even on D-Day (6 December 1992), the Central Government was getting information every second. The Central Forces were moving in immediately after kar sevaks had invaded the inner compound of the disputed structure. The state government had given orders to the Rapid Action Force (RAF) to move into Ayodhya at 1 pm on 6 December 1992.

The RAF convoy along with City Magistrate Sudhakar Adeeb had just reached outside Ayodhya, when the state government withdrew its decision. The RAF’s commanding officer stopped the convoy and told his superiors at the Centre that the state government now did not want them to move into Ayodhya.

The entire convoy waited for officers at the Centre to respond. I was witness to it. The Centre did respond. In a wireless message, the RAF’s commanding officer was asked to ‘take it in writing’ from the city magistrate as to why the state government did not want the Central forces to go into Ayodhya. The city magistrate dutifully took out a blank sheet of paper, placed it on the bonnet of the RAF jeep and wrote: ‘RAF could not move further beyond the Saket Degree College due to several road blocks.’ The formalities were complete. The RAF marched back to their barracks. The demolition continued until all three domes were razed to ground. And the RAF returned to Ayodhya only late night the next day, once a makeshift temple of Ram Lalla was placed on the spot.

This is my truth as a reporter. My affidavit as CGW No 24 still stands, but in it is a crippled truth. There was much more that I could have and wanted to say.

The author is a senior journalist based in Delhi