Where have those Muslim youths from Kerala gone? The call of the Islamic State 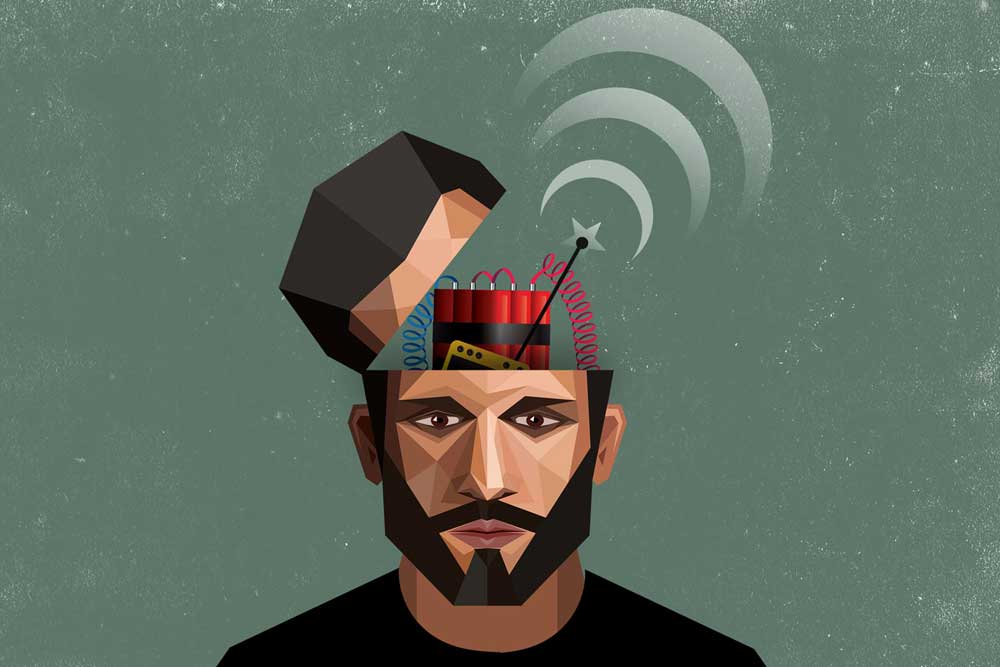 A missing person’s complaint is usually made at a police station. But this one went directly to the Chief Minister of Kerala. And not one, but 21 people were reported missing, all Muslims: 17 from Kasargod district, four from Palakkad. They all knew each other, were financially sound and well-educated. Family members add all were extremely religious, almost too much for their comfort, and wanted to follow the Qur’an in its literal sense. They had often gone on mysterious outstation trips lasting weeks or months but had remained in touch with their families. This time the frequency of messages came down and finally stopped. The families of 15 missing from Kasargod contacted one another and found the messages received to be similar. Some hinted that they had reached ‘Daulathul Islamia’ (Islamic State) and invited their parents to join them. Terrified that their kin had joined the ISIS, they approached local political leaders who then met the Chief Minister. Thus began the storm that has shaken Kerala for over a week.

Two of those who went missing from Palakkad a month back were brothers and had once been Christians. Beston Vincent, now Yahiya, and Bexson Vincent, now Isa, had converted to Islam two years back. They became part of a study group in which the other missing persons were members. All of them had some association with the Mujahid Students Movement (MSM), the student wing of Kerala Nadvathul Mujahideen, a prominent faction of a reformist movement in Kerala founded in 1923. All of them had participated in a conference of professional students organised by MSM. It was where Isa had met his wife, who used to be a Hindu but had converted to Islam. Police agencies still don’t know whether those missing have joined ISIS. There are unconfirmed reports that one of them has been detained in Mumbai by the Intelligence Bureau. Loknath Behra,the state DGP, says it is too early to jump to conclusions and refuses to confirm the ISIS link. Their family members live in dread at the possibility.

TK Hafeesuddin, 23, from Padanna Panchayat in Kasargod, set off to Calicut to attend a Qur’an class on 28 May. On the third day, he called his mother, saying the lectures were good and that he was staying back for five more days. In between she couldn’t get in touch with him and then suddenly got a message that he had gone to Sri Lanka for higher studies, promising to come back before Eid. Abdul Salam, Hafeesuddin’s uncle, says, “Between 20 and 25 June, his wife got an unusual message, ‘We have reached our destiny, we have reached Darul Islam’. There was no mention about the location or future plans.” Salam contacted the parents of two others who had also gone for the Qur’an class and found that they were also missing. Salam, who gave up religion at the age of 18, says that Hafeesuddin had become so religious that he stopped using his uncle’s car because it was bought on a loan (with interest).

Family members of Kasargod’s 15 missing then got together and decided to report it to the authorities. They didn’t trust the police and decided to use the assistance of VPP Mustafa, a local CPM leader and a member of the district Panchayat council. When Mustafa went through the messages, he decided to take the issue to the Chief Minister, along with P Karunakaran, MP from Kasargod, and M Rajagopal, an MLA from Trikaripur. Mustafa knew some of the missing youths personally and had never found them engaged in social issues. “They were very ordinary boys till a point of time. Even their family members could not understand the change that came over them,” says Mustafa.

All those missing were financially sound and well-educated. Family members add they were extremely religious, almost too much for comfort

Hafeesuddin had schooled in Dubai, living there with his father. He wasn’t studious, had a large group of friends and loved cars. He was not at all religious during that time, not even performing rituals like namaaz or fasting during Ramzan. After Class XII, his father sent him back to Kerala to do his BCom. His neighbours were Ijas and Shiyas , who are also missing. “He was very close to them. I think he was profoundly influenced by them after his arrival in Kerala,” says Salam.

After he became religious, family members initially welcomed it. “Now people are holding the family responsible for ignoring the changes in him, but how is it possible? What is wrong in being religious? We could have been alert if he had said anything in favour of any extremist organisation or ideology, but he didn’t. There was nothing unusual except his long beard and changes in attire. We often fought with him about that. We often had differences with him. He insisted on us not using the TV at home because it was not Islamic. He asked his sister not to go back to Dubai because it was unIslamic. He asked us not to vote in the Assembly election,” says Salam, recollecting that Hafeesuddin’s father once took him to a saloon forcefully to cut his beard when he came on leave from Dubai. He finds it inconceivable that Hafeesuddin could join a terrorist group, because he was afraid of violence.

Even more strange is the story of Nimisha, daughter of Bindu Sampath, who is from Thiruvanthapuram. Nimisha, who became Fatima after conversion, was studying in a dental college in Kasargod and married Bexson (later Isa) in October 2015. Bindu Sampath filed a writ of habeas corpus against Nimisha’s act, but the court dismissed it and allowed her to go with her husband. But Nimisha’s conversion to Islam was not the result of her marriage. She converted in 2013 according to the court judgment on her mother’s writ petition. Bindu says she had no clue of it. “She used to come home every weekend. She was a god-fearing, happy child. We used to go to the temple and she used to participate in all religious rituals before our family deity,” she says. After her petition was dismissed, she visited her daughter at her husband’s place. “It was so shocking to see my daughter observing purdah, covering all her face. I don’t know what happened to my girl,” she says. Nimisha last visited her mother towards May end this year along with her husband. The last message Bindu got from her was on 4 June, about a Sri Lanka business trip. She was seven months pregnant.

Nimisha’s husband Bexson and his brother Beston had both been pious Christians and regular attenders of the local church, according to their step-mother Elsy. She doesn’t know how they converted to Islam, but speculates it was when Bexson had a Muslim girlfriend before his marriage with Nimisha. “He stopped attending Sunday Mass but did not convert. The conversion happened along with his marriage with Nimisha,” she says. Both of them left home in the second week of May saying they were going to Sri Lanka on business. On 4 June, Elsy and her husband Vincent got a message that they were safe and trying to find a house. There was also a request to not disclose their whereabouts to anyone. “That was the last communication,” says Elsy.

THE FAMILY WORST affected is from Padanna in Kasargod. Eight of its members—Ijas, his wife Rifaila, their two-year- old son Hayan, Ijas’ brother Shiyas, his wife Ajmala, their cousin brother Ashfaq, his wife Shamsiya, their 18-month-old daughter Ayisha—have gone missing. Sayyid Mujid, Ijas’ uncle, says, “My sisters have not slept or eaten for a month.” He says all the boys had been perfectly normal till two years ago. “The first thing we saw was them growing long beards. They also asked us not to go to the polling booth during the Assembly polls,” he says, adding that Bexson, Beston and another missing person Abdul Rashid Abdulla used to come home. “Once when they started conducting Qur’an classes at home, we told them we would not allow it,” says Mujid.

It was so shocking to see my daughter observing purdah, covering all her face. I don’t know what has happened to my girl

After the chain of bombings in Istanbul, Baghdad and Medina, imams at local mosques cautioned the community against ISIS in Friday sermons, asking Muslims to stand up against it. When these young men having gone missing became news, Muslim organisations issued a joint statement asking community members to be vigilant against extremist forces creeping into the social fabric. “The rise of puritanism has its roots in Wahhabism, the real cause of this menace,” says C Davood, a leader of the Jamaat- e-Islami, adding it played a significant role in shrinking the lives of Muslims to a literal reading of the Qur’an. “Instead of identifying the silent spread of puritanism which has nothing to do with the socio-political realities of Muslims as a community, the state focused on wrong targets like the Muslim organisations which stand for legitimate rights of minorities.”

TP Abdullal Koya Madani, general secretary of the Kerala Nadvathul Mujahideen, says the longing for an ideal Islamic world is a stupid idea. “Our organisation has never promoted such extreme ideas. I heard that one of them had sent a message to his family that they wanted to do goat farming because Prophet Muhammad had done the same. There is nothing sacred about goat farming.” He says his organisation will do everything possible to check Muslim youth joining ISIS. Prominent Sunni leader Kanthapuram AP Aboobacker Musaliyar has also said in the past that that ISIS is not only against the spirit of Islam but entire humanity. The Popular Front of India too terms ISIS as an enemy of Islam.

How does radicalisation happen if everyone is against the Salafism from which ISIS draws theological legitimacy? “In a way, all these organisations are more or less responsible,” says Yasir Arafat, an Islamic scholar and an assistant professor of history at Delhi University. He observes that aggressive debates between these organisations and fringe groups on whose Islam is the true one has played a crucial role in promoting neo-Salafi ideas in Kerala. “Certain organisations like Jamaat-e-Islami have rolled back from this argumentative mode on true Islam, but they effectively made use of the chauvinistic elements that emerged out of Salafisation and Arabisation in Kerala.” Dr Ashraf Kadakkal, assistant professor of Islamic history at Kerala University, holds splinter Mujahideen groups specifically responsible for misleading the youth. “They blindly follow the literal meaning of the text, taking it out of context, resulting in extreme ideas of spirituality that make them guilty about the unIslamic world they live in. The urge to flee to the ‘true Islamic state’ comes from this sense of guilt. I would call it spiritual terrorism.” There are Salafis in Kerala who think they are following the literal lifestyle of Prophet Muhammad. “Any occupation other than goat farming is unIslamic [to them]. There are such cult groups in some parts of Kerala. They are known as Dammaj Salafis. I have visited such people engaged in goat farming in Kannur as part of my research. Fortunately, the large majority of Kerala Muslims do not follow any such extreme spiritualism,” says Dr Arafat.

Meanwhile Hindutva organisations like the Bharatiya Yuva Morcha and Bharatiya Janata Yuva Morcha have led protest marches to Peace International School and Century Dental College, with which two of the missing persons were associated. O Rajagopal, the lone BJP MLA of Kerala, has alleged that Nimisha’s case ratifies the theory of ‘love jihad’ . Dr Arafat believes that Hindu and Islamic radicalisation feed off each other. Thiruvananthapuram and Palakkad districts have Salafi presence. “These are the two districts in which the BJP and RSS achieved visible growth,” he says.