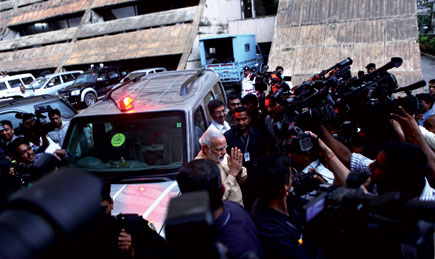 
Is news television all about TRPs? Or is it an agenda of some kind? Or is there a third dimension? As I sat down to write this piece, my brief was how the Indian media—especially television news—was covering Narendra Modi.

There were no clear-cut answers. And here is why.

“Modi does not need either the party or PR agencies; television news media is doing the job for us,” confides a senior BJP leader. Asked if this is acceptable in a democracy, he replies: “Hasn’t the media done the same with Rahul Gandhi?”

That very evening, as I sat watching Aaj Tak, the popular Hindi news channel, I could see what the BJP leader meant. The 10 o’clock show—news bulletins are passé—had this lead story on how Bihar CM Nitish Kumar of the JD-U was trying to stymie Modi’s Patna rally by deliberately hosting the President of India (who later changed his Patna programme) on the same day. What struck me was the brazen spin-doctoring by the scruffy-faced, long-winded anchor. His argument ran as follows: Nitish Kumar’s main objective was not to thwart Modi’s rally per se, but prevent its staging at Patna’s historic Gandhi Maidan, right in the heart of the city. Every successful rally here in the past has signalled the end of political regimes not just in Patna but in Delhi as well. This had happened in the 1970s during the JP Movement and later in 1989 when VP Singh led an anti-corruption campaign.

As we now know, nothing even vaguely of the sort happened. But such spin doctoring in subtle and unsubtle ways—endless airtime to Modi speeches, ‘colour’ stories on ‘NaMo tea’, kurtas and masks (one newspaper even claimed it is a Rs 500 crore industry!), you name it—is pretty much the norm across news networks these days. And this stems from the peculiar beast that television has become, with ‘bites’ driving the news cycle. Of course, there is a pattern to it. First, a montage of bites reflecting neat bipolarities—the Congress versus BJP, for example—which then merges seamlessly into a news studio where the anchor has rounded up partisans reflecting identical divisions. It is here, in the studio, that the nightly drama plays out with the anchor doubling as a sort of a ringmaster who provokes, hectors and lights the fireworks towards a scripted denouement.

With reporting dead, and bite collection mainly outsourced, there is no need for a field report to check political claims against reality. For instance, I don’t remember seeing any field report on malnutrition in Gujarat despite the issue becoming the subject of a bitter studio war between the two parties. Or the recent toilet versus temple controversy that was decried as ‘manufactured’. Is this news or primetime entertainment? Or simply the gross trivialisation of serious issues confronting our democracy?

Since the TV media ecosystem feeds on bites, it allows for imprecision, fudging, backtracking, denials and endless controversies that all serve to make spin doctoring child’s play. This is not easy in the print media, which lives up to at least a modicum of precision.

The only clarity in this chaos is the increasing clout of media promoters with their biases and preferences.

Several past and serving employees of the media behemoth Network 18 have told me that a heavy-duty ‘go-soft-on-Modi’ campaign is underway within the group. The editorial line is allegedly emanating from the ‘top’. A former anchor with IBN 7 traces the changes in the network’s ‘line’ to a specific event. They came about only after Mukesh Ambani picked up a stake in the media group. “Arvind Kejriwal was virtually blacked out after he hurled charges at Mukesh. On the news floor, in both CNN-IBN and IBN 7, every journalist knows that there are orders to rein in anti-Modi stories,” he adds. “There are standing instructions to cut live to any Modi rally or speech,” says another journalist.

However, Rajdeep Sardesai, editor-in-chief of CNN-IBN, trashes all this. “This is all cock and bull,” he says, “There has been no change in line at any time. Both Rahul and Modi are top contenders for the PM’s post. We neither deify nor demonise either of them, but analyse their pluses and minuses in great detail.”

But if Sardesai is right, then how does one explain the cloyingly pro-Modi chant on the group’s news portal, Firstpost.com? Here is a gem masquerading as reportage: ‘Delhi on Sunday witnessed a public rally the likes of which it had not seen in decades’, thanks to Modi’s ‘rock-star’ image that created a ‘maddening frenzy’. Another story headline screams: ‘JD(U) MP makes Nitish squirm: Are you jealous of Modi?’ This article, on Shivanand Tewari’s recent speech in Rajgir praising Modi’s ascent, has little explanation of the ‘jealousy’ angle. Yet another so-called report on the website gushes: ‘Patna blasts showed Modi’s leadership, Nitish’s ineptness.’

R Jagannathan, editor-in-chief of Firstpost, defends the group website by saying, “We are essentially an opinion portal. We also carry news. We have different editors who are free to air their own views. As the editor-in-chief, I don’t interfere.” On the Ambani factor, Jagannathan says, “I report to Raghav Bahl and there are no specific editorial instructions from him.”

While Ambani’s alleged ‘directive’ is in all likelihood driven by the fear of a ‘Third Front’ that he presumably shares with the business class at large—remember, both Modi and Rahul Gandhi are the only ones to be hosted by industry bodies CII and Ficci—media houses like Bennett, Coleman & Co Ltd (BCCL), which owns The Times Of India, have other impulses driving them. They only produce what sells. And, like Anna Hazare earlier (whose movement fetched higher TRPs than even the IPL), Modi sells. And he sells because of mounting urban angst over the UPA’s corruption and leadership woes, not to forget the outrage over dynasts and votaries of entitlement politics. What BCCL’s Vice-President Vineet Jain told the American journalist Ken Auletta of The New Yorker last year, “We are not in the newspaper business. We are in the advertising business,” holds true for a powerful section of the media.

That largely explains the BJP predilections of the group’s TV arm, Times Now.  This news channel’s latest poll survey—conducted by C-Voter—of the BJP’s poll prospects following Modi’s anointment as the party’s PM candidate is a case in point. The survey gives Modi the thumbs up. The conclusions are identical to what C-Voter had predicted in an earlier survey for the India Today Group before Modi’s elevation, where it had forecast a ‘doubling of BJP seats’ if he were made the candidate. It is hard to understand why C-Voter keeps getting high-profile polster projects despite its dismal track record. Each time, it has projected inflated figures for the NDA/BJP. In 2009, it had predicted 183-195 seats for the NDA. It got only 159. Five years earlier, in 2004, it had projected 270-282 seats for the NDA. It managed only 181.

As a reporter on the BJP beat, I remember party spokespersons holding up impromptu press briefings for a Times Now reporter to arrive. Much to our chagrin, the channel had better access to BJP leaders and was invariably the first to get a coveted ‘exclusive’ sit-down interview with Modi (or any other BJP leader). Its anchor Arnab Goswami’s interrogative, offensive and subjective style of anchoring, done in the Fox News mould, is shrill and minimalistic. It reduces issues to a simple formula of ‘for’ and ‘against’, of neat binary oppositions, since this works better with TV audiences, but it also tends to carry a ‘hidden’ preference for a ‘muscular’ state.

What this loud and vituperative media drumbeat has done is create ‘a sense of inevitability’. “It has helped to rescale Modi from a regional Gujarati satrap, a state never considered very significant in national politics, to a potential national leader,” says Santosh Desai, a marketing guru and social observer.

One of the disturbing downsides of this Modi froth is that it has not just polarised the ‘nation’, his party and the political landscape, but also the media. Remember the BJP leader’s quip with which this story began? As I wrote in this magazine some months ago (see ‘Remote Mindset’ Open, 15 June 2013), reporting on the Gandhis for NDTV, where I worked earlier, was like a complicated Brahminical ritual. Only a chosen few were allowed to report on their public activity and still fewer took editorial calls on the storyline that eventually went on air; the ‘buck’ stopped with Barkha Dutt, the absolute repository of Congress wisdom.

More to the point, my report elicited a slightly surprising response from my friends and colleagues. A good friend and Congress reporter called me up to remonstrate: “Why don’t you write the same about Modi? Don’t the BJP reporters do the same with him?”

This is the big tragedy for reporters of politics at a time of sharp political polarisation. The bitterness appears to have rubbed off on beat reporters, a number of whom are self-confessed ‘beat warriors’. Loyalty to one’s beat overpowers the journalist’s obligation to purvey accurate information to people at large.

The schism often plays out in TV studios. Some senior journalists are not averse to standing in for their ‘respective’ parties when partymen want to duck the press (as happened during the Robert Vadra episode). This has meant that space for journalists occupying the middle ground has alarmingly shrunk. Any objectivity that involves criticism of Modi or Gandhi is met with charges of being fellow-travellers and ideologues of one or the other party.

This pseudo bipolarity, a fallout of what BJP leader Arun Jaitley terms a ‘presidential style’ election campaign, is dangerous for democracy. It is a way of batting for both the national parties that resent the rise of regional parties that eat into their vote share. This bipolarity, which has willy-nilly seeped into our media discourse as well, leads to major distortions. While Modi’s meeting with TDP leader Chandrababu Naidu hit ‘national’ headlines, the 11-party meet in Delhi against communalism on 30 October, seen by many as a step towards a non-Congress, non-BJP alternative, was virtually blacked out by TV networks.

It also means that wherever the Modi-versus-Gandhi drama cannot be played out, you simply forget about it. Readers could be pardoned if they did not know that Assembly polls are also scheduled in Mizoram next month.

What is staple fodder for anchor-orchestrated drama in news studios is a far cry from the complex reality that shapes electoral outcomes in this country. One of the most powerful players in next year’s election drama is the urban middle-class, which appears to be rooting for Modi. But, as Desai says, media overkill so early in the run-up to the General Election of 2014 could lead to “diminishing returns and viewer fatigue” as we inch closer to the actual polling dates.

The larger issue, however, is an ethical one. Is the media accurately chronicling for its readers and viewers the unfolding drama of democracy so that everyone can make an informed choice?