Modi in the Time of Obama 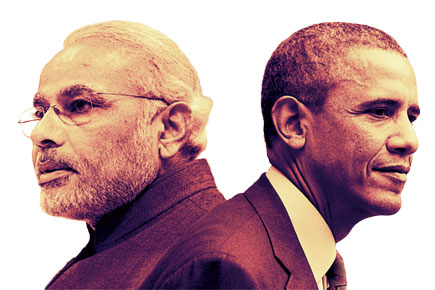 Barack Hussein OBAMA and Narendra Damodardas Modi. The two politicians have little in common physically: One is lean, long-sleeved, clean-shaven, the other hirsute, stocky, bare-armed. Theatrically, both men are vaunted as orators, although neither is entirely as good as he believes he is. The jobs they have (in Mr Obama’s case), or aspire to (in Mr Modi’s), are daunting: Mr Obama runs the world’s greatest, most powerful democracy; if he wins in May, Mr Modi will govern the world’s most ungovernable democracy, and also its largest.

In one other respect, the two men are similar: they are each great dividers of their nation. Mr Obama did not set out to be divisive. He offered himself to America (and, indeed, to the world) as a uniter, but he has, through a combination of personal hubris, political overreach domestically and under-reach abroad, and an emphatic conservative backlash, ensured that America today is as viciously at war with itself as it was under George W Bush. Just as Mr Bush was, at the more pungent extremes of partisan hostility, a ‘moron’ and a ‘frat boy’, Mr Obama is anathema in a number of lurid ways— crypto-Muslim, communist, and non-American (as distinct from un-American, which, to be sure, is also a frequent accusation).

Mr Modi, for his part, has never sought to be a uniter of India’s citizens; instead, he is an energiser of the country’s Hindus, essentially a ‘tribal’ leader on a gigantic scale, incapable of offering any concession—no, not even that of the occasional token apology, or even the good-natured wearing of a Muslim skull-cap while on the campaign trail—to those not of his tribe. In his view of India, those not ‘with him’ are incorrigible, and carry with them the stench of this observation made by Elias Canetti in Crowds and Power: ‘It is always the enemy who started it; even if he was not the first to speak out, he was certainly planning it; and if he was not actually planning it, he was thinking of it; and, if he was not thinking of it, he would have thought of it.’ (This last line sums up the early calamity, and the carnage, of Modi’s Gujarat.)

Should Mr Modi become the next Prime Minister of India—and there is every indication that he will, whether progressives like it or not—his relationship with Mr Obama will offer up some complex chemistry. The American president would never say so in public, but one can be sure that he finds Mr Modi very disconcerting: He cannot possibly care for his religious fervour, and his hyper-nationalism. The cosmopolitan Mr Obama’s father was Muslim: However Christian the American president may be in his own religious observance, how can the fact of his own descent from Muslims not give him pause as he studies Mr Modi—the man for whom Muslims, in spite of everything his apologists say, are not quite first-class citizens of India, excluded (by definition) from Hindutva, his guiding tribal philosophy.

There is also the fact that Mr Modi, as Chief Minister of Gujarat, was denied a visa to enter the United States in 2005. As Prime Minister, he will surely be able to visit the US without ‘let or hindrance’, to use the quaint English found on the pages of passports. Should he come to America, there will be crowds that dog him wherever he goes, chanting protestors who unfurl banners, noisy (even obnoxious) bands who shriek at him the American equivalents of ‘hai-hai’ and ‘murdabad’. They will be on television offering sound bites, using words that make Americans recoil, like ‘genocide’ and ‘pogrom’. There will be op-eds, fulmination in The New York Times. Mayor de Blasio of New York could well boycott a reception in town.

America isn’t India, where embarrassing protestors are banished from sight when foreign pashas visit. There will be no rounding up of people in Washington before a visit of an Indian prime minister as there is of Tibetans in craven Delhi every time a Chinese dignitary swings by. And when he does visit Mr Obama in Washington—as he will and must—Mr Modi will need to prepare himself for a public display of rapport that never rises higher than perfectly-pitched cordiality. Mr Obama is not a bonhomous man by instinct, and he isn’t going to make himself so for an Indian politician who has a reputation in American liberal circles (prime Obama turf) as a ‘fascist’. Mr Obama has had frosty relations with foreign leaders who have much, much more in common with him than the bearded torchbearer of Hindutva. Why would he go to bat for Mr Modi?

All of which points to an inevitable delay in any visit to Washington by a Prime Minister Modi, or another visit to India by President Obama. As the embarrassing Khobragade episode has demonstrated, India is no longer the first-rank friend of the United States that it was under President Bush. India’s economic stagnation is to blame, as is Mr Obama’s obvious rejection of a place that was Bush Country (and before that, Clinton Country). From conversations with people in Mr Modi’s inner circle, I understand that the latter’s first foray abroad as pradhan mantri will almost certainly be to Japan, another land with a feisty, nationalist prime minister, one who has a major bone to pick with Obama’s America. Although one does not readily associate Mr Modi with ‘tip-toeing’, that is precisely the sort of footwork we should expect from him and Mr Obama for at least the first year of a Modi government, by which time Mr Obama will be mired in lame-duck territory, with America just months away from its next presidential election.

After that, I wager that Narendra Damodardas Modi and Hillary Rodham Clinton will hit it off. Pragmatically. Unfussily. Big time.

Tunku Varadarajan, Virginia Hobbs Carpenter Research Fellow in Journalism at Stanford University’s Hoover Institution, is a columnist for the Daily Beast and a former editor of Newsweek magazine. He is working on a book on the impact on Indian politics of the Shah Bano case