With his eye on 2014, the BJP’s prime ministerial candidate is reaching out to Muslims like never before 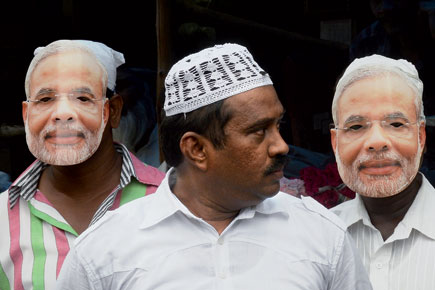 With his eye on 2014, the BJP’s prime ministerial candidate is reaching out to Muslims like never before

Earlier this month, Narendra Modi addressed a rally in Jammu. It was a routine Modi speech. He spoke of his association with the state of Jammu & Kashmir and invoked the names of its leaders and other prominent figures. He indulged in a bit of Nehru bashing and paid a glowing tribute to the Jan Sangh patriarch Shyama Prasad Mookherjee, who he had less than three weeks ago at a gathering in Gujarat confused with the nationalist Shyamji Krishna Verma.

It was Modi as usual.

But then, the BJP’s prime ministerial candidate spoke of the controversial Article 370 of the Indian Constitution. What Modi said was not what his supporters expected. He called for a debate over whether Article 370—which grants J&K ‘special status’ assuring it some autonomy in legislative matters that other states do not have—was beneficial at all for the state. This was a big departure from the BJP’s demand for complete abrogation of the Article. In fact, revoking it has long been one of the party’s three major points of contention with Congress policy—a Rama temple in Ayodhya and a Uniform Civil Code being the other two—that aided its rise in Indian politics in the 80s and 90s as a successor of the Jan Sangh.

Soon after Modi’s speech, his spin doctors rushed to defend his softening of the Sangh Parivar’s old line by attributing his remarks to the ‘democratic’ fibre of the BJP. But the PM candidate’s words on the issue, as also his multiple mentions of Gujjars, Bakarwals and Shias in his Jammu speech, hardly came as a surprise to those who have been following his trajectory since he became his party’s PM hopeful.

Modi’s days of refusing a skullcap proffered by a Muslim cleric or referring to Pakistan’s former President Pervez Musharraf as ‘Mian Musharraf’ are over. In the cold arithmetic of electoral politics, Modi recognises the role that Muslim votes could play in fulfilling his dream of addressing the nation on Independence Day from the ramparts of the Red Fort. This has resulted in a remarkable shift in his public posture vis-à-vis India’s largest religious minority.

Modi’s Jammu speech was just one among many others that were at least partly meant to woo Muslim voters. In Jammu, among the 10,000 Muslims said to have attended his rally, 4,000 were from Kashmir Valley. An earlier sign of his new stance was noticed at a rally he held in Patna, where he addressed Muslims as ‘Mere Musalmaan bhaiyyon’ (My Muslim brothers) and said that their enemy was not Hindus but poverty.

Over the past six months, a lot of backstage work has gone into Modi’s effort to attract Muslim opinion-makers and turn them into his ambassadors within the community.

In July, a group of Islamic scholars and clerics met Modi, one of many Muslim delegations Modi has met in recent months. According to a businessman who was present, the Muslim delegates raised several concerns and Modi addressed them in a frank manner. Among those at the meeting was the influential Islamic scholar Mufti Aijaz Arshad Qasmi. On the Ayodhya issue, Modi is believed to have told the delegation that the construction of a Rama temple at the site was not on his agenda. “Vajpayee ji could not construct it in his tenure of six years,” he reportedly asked, “how can Modi do it?”

On 30 June, just before a BJP youth enclave in Gandhinagar, the Gujarat-based entrepreneur and Modi supporter Zafar Sareshwala received a call from Modi’s office asking him to ensure that the enclave had enough Muslims in attendance. Sareshwala picked 35 youngsters of his religion from areas as diverse as Lakshadweep and Kashmir to join the gathering of about 175. The entrepreneur asked Syed Zafar Mahmood, former Officer on Special Duty with the Sachar Committee, to deliver a sort of keynote speech on behalf of Muslims. “He put two conditions,” says Sareshwala, “One: he will say whatever he wants to; and two: Modi should be present during his speech.” Modi agreed. In his address, Mahmood attacked BJP policies and pointed out to Modi that while his disaster relief efforts in Uttarakhand were laudable, he also ought to pay attention to the condition of Muslims in his own backyard. Modi is reported to have listened to him in rapt attention and promised to act on all the points he raised.

Most influential Muslim supporters of Modi say they have had bitter experiences with the Congress and resent being held hostage to its politics. “We had become slaves of the Congress party,” says Qasmi. “For years, they used the fear of Narendra Modi to make us vote for them. But not anymore.” Qasmi has set up a platform called the United Muslim Front (UMF) that campaigned against the Congress in the recent Assembly elections in Delhi and Rajasthan. “The Congress has been in power in Delhi for so long and yet their record on minority schemes is abysmal,” says Qasmi. “In Delhi schools, we found out that 73 per cent of Urdu teacher posts are lying vacant. No grant has been given to the Wakf board and the funds given to the Urdu Committee were spent on hosting Iftaar parties,” he claims.

The UMF sent out over 1.5 million SMSes in Delhi, urging people not to vote for the Congress. It also reached Muslim voters through ads in Urdu newspapers. Qasmi claims that a day before the Delhi polls, a key aide of the then Chief Minister Sheila Dikshit called him up, requesting him to stop his campaign. “He asked me to give them 3-6 months to set things right. But if they haven’t been able to do it in 15 years, what would they have done in a few months?” asks Qasmi.

An internal report of the Congress suggests that the party lost more than 70 per cent of Muslim support in Delhi. “Modi has become soft,” says Qasmi. “He talks about development and Muslims want that development.” However, he remains cautious of the implications of his movement. “Ultimately,” he says, “we will have to create a political platform of our own.”

Disillusionment with the Congress, say Modi’s Muslim supporters, is a natural fallout of the party’s neglect that has reduced them to a community of committees and commissions.

Sareshwala remembers a time when he along with his filmmaker friend Mahesh Bhatt went to see senior Congress leader Salman Khurshid, who was then the Union Minority Affairs Minister. “He made us wait for three hours outside his office even though we had been granted an appointment,” says Sareshwala, “And finally when he met us, he did not hear me out for even three minutes.”

One big coup for the Modi camp has been the switching over of Asifa Khan from the Congress to the BJP. A former journalist who joined politics at the behest of senior Congress leader Ahmed Patel and was considered his protégé, Khan was appointed spokesperson of the Gujarat Congress in 2009.

As a journalist, Khan says, she had reported extensively against Modi during the 2002 riots in Gujarat on his watch as Chief Minister. In fact, she says, it was she who gave the whereabouts of Zakia Jafri, wife of the slain Congress leader Ehsan Jafri, to some top journalists covering the violence. “But while in the Congress,” she says, “I realised I could not even address the basic grievances of people from my community who came to me.”

Khan switched over to the BJP just before Gujarat’s Assembly polls in 2012. Modi himself had asked her to. She is now a national executive member of the BJP Minority Morcha. “I realised that though Modi never won on a Muslim plank, he did more for [the community in Gujarat] than the Congress [had],” says Khan.

She adds that Muslims began engaging Modi after they realised he was serious about development. She cites the example of the Vagra Assembly constituency in Gujarat where 31 per cent of Muslims voted for a Hindu candidate put up by the BJP against a Muslim candidate. The BJP candidate won by a margin of over 14,000 votes. In February this year, the BJP swept the polls in the state’s Salaya municipality where 90 per cent of the population is Muslim. A Congress bastion until recently, the BJP put up 24 Muslim candidates in 27 seats and all of them won. “Let us be clear: Muslims are voting for Modi, not for the BJP,” says Khan.

Modi’s new friends know that the examples of Vagra and Salaya do not mean anything for the 2014 Lok Sabha elections. Some analysts speak of a pattern of captive ghetto votes, where vulnerable voters safeguard their interests by going with the tide. However, there is evidence of a jump in Muslim votes for the BJP in Madhya Pradesh and Rajasthan too, which is good news for the party.

Yet, it is states like Uttar Pradesh and Bihar that will determine Modi’s fate in 2014, especially UP. In 2009, the BJP fared poorly in this state by winning just 10 of its 80 Lok Sabha seats. In the 2012 Assembly elections, it gained some Muslim vote share. After the recent Muzaffarnagar riots in western UP, there are clear signs of a Jat consolidation in favour of the BJP. But Modi is not leaving it to that alone. In western UP, Muslim voters can sway over 20 seats, while in eastern UP, they play a decisive role in at least 12. A BJP insider speaks of how Modi’s office has systematically approached clerics and workers of madrassas in Bihar and UP who come to Gujarat to collect zakat (charity given by Muslim individuals) asking them to take his message back to their constituencies.

All said, Modi is trying hard to convey to the Muslim electorate that their future lies with him. In his speeches, he claims that Muslims have a better deal in Gujarat than anywhere else. Recently, The Economist hailed Modi as ‘a man of action and an outspoken outsider in a political system stuffed with cronies.’ The London-based publication also advised him to reach out to Muslims.

That, Modi is already doing. But the stains of 2002 may be too difficult to wash away completely. In 2002, sitting next to Modi, then Prime Minister Atal Behari Vajpayee, responding to a reporter’s question, said that his message for Gujarat Chief Minister Modi was that he should follow his Raj Dharma (duty of governance). To which, Modi said that that is what he was doing.

In 2014, Indian voters, especially those who are Muslim, will let Modi know whether they agree with his idea of Raj Dharma. Or if they are at least willing to forget it.