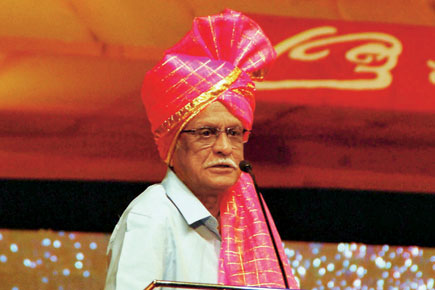 Neighbouring Bangladesh has witnessed the murder of four young secular bloggers this year. In Syria, a scholar called Khaled al-Assad has been put to death by ISIS fanatics. Maharashtra was shaken by the murder of Dr Narendra Dabholkar, a rationalist of repute, nearly two years ago. He was instrumental in getting a law against black magic and practices related to blind faith passed in Maharashtra. Govind Pansare, another well-respected activist, was killed just a year ago. Pansare was working on many issues, his activism against blind faith being just one of them. He is also the author of a well-known tract on Maharashtra’s revered king Shivaji.

On the back of the murders of those two rationalists comes the murder of Professor MM Kalburgi on 30 August 2015 at his home in Dharwad, Karnataka. Professor Kalburgi was an accomplished man, the former Vice-Chancellor of Kannada University in Hampi, a writer of over 100 books and recipient of the National and Karnataka Sahitya Academy Award for his work. The learned professor had done a deep study of the Veerashaiva tradition of Basavanna, among others. Controversies followed him and so did threats from conservative forces. The first one came after the publication of a Marga treatise on Kannada folklore that included articles on Veerashaiva and Basavanna. Due to the death threats issued to him time and again, he was given police protection; this was withdrawn on his request recently. He supported UR Ananthamurthy on the issue of stopping idol worship. When he invited VHP leaders and the pontiff of a math, Vishwesha Teertha Swami, for a public debate, another controversy followed. His support for Karnataka’s Prevention of Superstitious Practices bill invited the anger of Bajrang Dal type of organisations and he had to face protests where his effigy was burnt.

There is a pattern in the murders of Dabholkar, Pansare and Kalburgi. Though there are some differences in the broad range of their fields of social engagement, the similarity is striking. They were rational, they made their opinion abundantly clear and they received many threats. Another stark similarity is that all three were early morning murders carried out by assassins who came on motorcycles, one person driving the bike and the other pumping bullets. Strangely, the killers of Dabholkar and Pansare have not been nabbed so far despite the long period of time that has elapsed.

After the murder of Kalburgi, a Bajrang Dal activist called Bhuvith Shetty tweeted, ‘Then it was UR Ananthamurthy and now MM Kalburgi. Mock Hinduism and die dogs death. And dear KS Bhagwan you are next’. This tweet was later withdrawn. Also, many people related to Hindu right-wing organisations started saying that Kalburgi had insulted Hindu gods, so there was anger among Hindus. This is a subtle justification of the intolerance that our society is being gripped with. The attitude of communal elements in different religious groups is rather similar. One recalls the threat to Salman Rushdie, the intolerance shown to Taslima Nasreen, the brutal killing of bloggers in Bangladesh and the murder of Salmaan Taseer in Pakistan. Taseer had stood in defence of a Christian woman who was accused of blasphemy.

Opposition to voices of reason has been part of history all through. One could well begin with Charvak, who opposed the Brahminical understanding of the world, the divine nature of the Vedas in particular. Charvak said that the Vedas are man- made, social in nature, and was persecuted for it. Gradually, the power of the clergy ensured that the imposition of faith on society became more institutionalised. Even the teachings of Gautam Buddha, who was agnostic and talked about the social nature of human problems, were attacked. This led to the wipe out of Buddhism in India. The medieval Bhakti saints were also in favour of rational thinking, critical of the imposition of various social practices and rituals in the name of faith. Many saints like Tukaram in Maharashtra had to face persecution at the hands of those who were close to the clergy.

Globally, the same pattern was seen in Europe. There, scientists and rational thinkers had to face the opposition of the organised Church, which condemned Galileo to ‘hell’ for stating that the Earth is round, for example. Similar was the fate of many scientists who had to face inquisitions and punishments of various types. The clergy hid behind the façade of ‘divine authority’ and faith, and tried to stall the process of social change and halt scientific thinking. Over a period of time, society overcame the opposition to rational thinking, and thus emerged science and the spirit of scientific inquiry. Till then, the clergy had maintained that it was the sole repository of all knowledge, arguing that all of it was available in holy books. This has had manifestations in different cultures and religions in diverse ways. In Pakistan, some maulanas asserted that the problems related to power can be solved by doing research on djinns who are considered to be power houses of infinite energy. This was presented as part of religious ‘knowledge’.

In India, during the freedom movement, those who stood for social change and transformation also upheld rational thinking and critiqued the scriptures from that angle. The traditionalists, who wanted to retain old social equations, resorted to ‘our glorious heritage of knowledge’. Faith based understanding was counterpoised against the spirit of scientific inquiry. With independence and Nehru at the helm of affairs, the notion of ‘scientific temper’ came up in a big way, paving the way for the establishment of institutions of higher learning and research and leading to the country’s growth and transformation towards democratic structures. The nation was looking forward to all-round progress at the time. Rational thinking was duly promoted. India’s Scientific Policy Resolution, based on reason and logic, was passed unanimously in 1958.

Things start changing in the 1980s when politics in the name of religion asserted itself. Faith continued to be an emotional support system in times of social anxiety, but it also started making assertions in the socio-political arena and gaining some legitimacy. Social conservatism and the undermining of rational thought went hand in hand. Incidentally, it was also during this phase that several groups promoting rational thought and opposing blind faith came up. Among the most prominent of these was the Kerala Sasthra Sahithya Parishad. It was later, in Maharashtra, that Dabholkar took the lead to establish the Andhashraddha Nirmoolan Samiti (‘committee to oppose blind faith’). This took Maharashtra’s conservative elements by storm, as the volunteers of this organisation started going from village to village to demonstrate the science behind the magic tricks being practised by hordes of godmen and others of their tribe who were exploiting the social insecurity of poor villagers. Pansare, in addition to opposing blind faith, was also disseminating the values of Shivaji, presenting him as a leader who had respect for all religions (as he did). Right-wingers could not stomach this. Nor could they oppose the logical formulations presented by him. In Karnataka, individuals like Ananthamurthy articulated their stance against idol worship and blind faith. Like them, Kalburgi was very vocal in his convictions and authored many papers and books to disseminate his ideas.

Slightly back in time, when the first NDA Government came to power with Murli Manohar Joshi as India’s HRD Minister, he introduced courses like ritualism (paurohitya) and astrology in universities. This gave a big boost to ‘faith’ based groups that endorsed politics in the name of the Hindu religion. With the current Government coming to power last year, now again mythology is being promoted as history. The Pushpak viman, ‘plastic surgery in ancient India’ and so on are under discussion even as so-called fringe elements are becoming more assertive.

The country’s liberal open space is shrinking and the place of debate is being taken by physical violence. The liberal values that accept the validity of differences are being eliminated by force, intimidation and even state support. The murder of these ‘saintly’ figures shows that we are in a situation where those entrenched in social power are not only dominant, they do not want rational thinking to exist in society.

On the other hand, there has been tremendous opposition to these brutal acts. Social groups upholding pluralism and rationalism have been agitating against these murders and the ideology of those involved in them. Protests by sections of society against the murders of Dabholkar, Pansare and Kalburgi show that there are still a large number of people who are willing to uphold rational values. This is a ray of hope. In the past couple of years after the murder of Dabholkar, various social groups have been coming together determined not only to oppose intolerantly aggressive right-wing politics, but also to take up the unfinished task of the slain pioneers who were committed to social change.

(Ram Puniyani is an author, activist and a former professor of IIT-Bombay)