The BSP leader’s latest effort to woo Muslims as part of her new electoral formula is raising the communal temperature in UP. 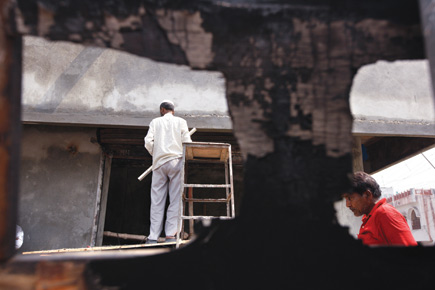 The BSP leader’s latest effort to woo Muslims is raising the communal temperature in UP.


As the Bahujan Samaj Party (BSP) celebrates its 25th anniversary amid signs of Uttar Pradesh (UP) politics entering a phase of communal chaos, Chief Minister Mayawati has signalled a radical alteration of the party game plan. She has replaced Satish Chandra Mishra, the man credited with a Brahmin-Dalit alignment that catapulted her to power in 2007, with Nasimuddin Siddiqui, the BSP’s Muslim face, in order to craft a new Dalit-Muslim social coalition for the 2012 Assembly polls.

As it happens, Mayawati’s attempt at re-drafting her electoral success formula coincides with a sudden communal conflagration in UP, first at Bareilly and then Agra and Raebareli soon after. It’s a coincidence all too stark to overlook.

Siddiqui, a minister in Mayawati’s cabinet, has the unique distinction of holding almost all lucrative portfolios in the state, including PWD, irrigation, excise, sugar and cane development, housing and agriculture. The last one was added to his kitty merely five days after the BSP’s 15 March silver jubilee rally at Lucknow, where Mayawati bestowed upon Siddiqui the responsibility of weaving together Muslim and Dalit interests, and downgraded Mishra to a mere in-charge of the party’s legal cell.

Siddiqui’s elevation and Mishra’s fall, amid signs of Brahmins shifting towards the Congress, came merely days after he is said to have swayed Barelvis—followers of the most popular school of Islamic theology in the state—away from the Congress. Party sources say the Barelvi breakthrough, though still tentative, came on the back of a Bareilly reeling under curfew imposed soon after communal clashes were sparked off by scuffles involving a procession on 2 March to mark the birth anniversary of Prophet Muhammad.

In the Lok Sabha polls of 2009, Barelvi leaders had spurned Mayawati’s overtures in favour of the Congress, said to be a factor in the party’s victory in as many as 22 constituencies in UP. Even on 11 February this year, when Congress leaders Digvijay Singh, Sheila Dikshit and Rita Bahuguna Joshi presented a commemorative chadar of flowers as an urs token on behalf of party President Sonia Gandhi at the dargah of Ala Hazrat Ahmed Raza Khan, founder of the 19th century Barelvi movement, few seriously believed that the bond could weaken so easily.

But barely a month since, Ahmed Raza Khan’s direct descendants, a pivotal family with considerable sway over the Hindi belt’s Sunni Muslims, have declared themselves grateful to Mayawati for her ‘sense of justice’. “In the last Lok Sabha election, we had supported the Congress. But we have realised that its intentions are not good. It has, for example, not yet set up a judicial enquiry into the Batla House encounter despite repeated requests by secular people all over the country,” says Maulana Tauqeer Raza Khan, who takes all political decisions for the family as president of the Ittehad-e-Millat Council, a political outfit, though his elder brother Maulana Shubhani Raza Khan, chief cleric at Dargah-e-Ala Hazrat, is the one with a religious following among Barelvis. “We have therefore decided to disassociate ourselves from the Congress,” adds Maulana Tauqeer Raza Khan, “We are yet to take a final decision on the party we will back in the next Assembly polls. But the BSP is certainly better than the Congress and Samajwadi Party (SP) when it comes to protecting the interests of minorities and maintaining communal harmony in the state. Her sense of justice is excellent and she does not hesitate in taking bold steps.”

That re-appraisal has been shaped in no small measure by the Bareilly flare-up and Nasimuddin Siddiqui’s role in getting him released on bail three days after his arrest on 8 March for inflammatory speeches allegedly made by him on 2 March, the day trouble broke out. Many in this town also believe that the very act of arresting the maulana after normalcy had been restored had more to do with coercive politics than law and order. For, not only was he given a clean chit once his elder cleric brother held protests demanding his release, even District Magistrate Ashish Goel and Deputy Inspector General of Police MK Bansal were promptly transferred—purportedly to assuage Barelvi sentiments. “Arresting someone and then releasing him looks like a wider gameplan,” notes Praveen Singh Aron, the Congress MP from Bareilly.

Tauqeer, however, has a different take. “The state government had no hand in my arrest. It was the mischief of the DM and DIG. I am grateful to Mayawati for taking action against these two officials,” he says. “As for Siddiqui, I have never had any interaction with him. But after my arrest, he certainly told my brother that injustice had been done to me, and that he would do everything [he could] to get me released and have all fake charges against me lifted.”

Whatever explains the loyalty shift, one thing locals agree on is the link with Siddiqui’s behind-the-curtains manoeuvres during Bareilly’s days of tension. “Now that Mayawati’s pressure has started working on Barelvis, Siddiqui’s elevation suddenly holds meaning for the BSP,” says a senior BSP leader, “Muslims and Dalits can make a formidable combination.”

Barelvi leaders are not all; BSP insiders claim that Mayawati has already struck an understanding with Maulana Rabey Hasan Nadwi, rector of one of UP’s two biggest Islamic seminaries at Nadwa, Lucknow. Maulana Nadwi is also president of the All India Muslim Personal Law Board. The Board has no consensus party of favour, but the BSP spies an opportunity to sweep Muslim votes in Maulana Nadwi’s re-election on 20 March as its president for a fourth term and its anti-Congress stance on the Women’s Reservation and Communal Riots Prevention bills. Then, there is also the BSP’s play for Shia support, which Mayawati has asked SMA Kazmi, chairman of the UP Commission for Minorities, to mobilise. The effort involves gatherings and seminars of special interest to this sect of Muslims.

The BSP’s grand objective of aligning forces against upper-caste domination of society and politics was part of the vision of Kanshi Ram, the party’s late founder. Back in the 1970s, this idea is what led him to form his Backward and Minority Communities Employees’ Federation. Intended for Dalits and Muslims to agitate together, it was the kernel that finally formed the BSP in 1984.

The solidarity that Kanshi Ram envisioned, however, did not quite translate into reality. Muslims, who constitute 19 per cent of UP’s population, may have held the decisive edge in several Assembly constituencies, but there have always been other claimants of their votes.

Before 1989, it was mainly the Congress. Briefly, it was VP Singh’s Janata Dal, but since the early 1990s, it was largely the latter’s splinter group, Mulayam Singh Yadav’s SP, that was seen as a bulwark against saffron politics. Muslim support for Mayawati’s party has been sporadic and ‘tactical’ at best—in Dalit-heavy areas where the BSP and BJP are the main contenders.

Now, for the first time, observers expect an actual three-way fight for Muslim votes in UP. Yadav has alienated a sizeable chunk of the community. The graph of the Congress, which took an upturn in 2009, is seen to be flagging under the sorry condition of its organisational machinery in UP and ire-arousing policies of the Centre. This makes space for Mayawati, who is expected to use all tools at hand—persuasion, appeasement and even arm-twisting if need be.

Mayawati’s aggressive pursuit of Muslim votes is bound to have a knock-on effect on the state’s politics of caste and community, with the SP and Congress making counterplans. For the moment, however, the BSP’s revised electoral plan threatens to end the long spell of communal harmony in UP. In Bareilly, the first clash on 2 March was followed by a second round on 12 March, the day after Maulana Tauqeer Raza Khan’s release. All this has spelt almost three weeks of full or partial curfew in the town.

On 18 March, Agra’s Shaheed Nagar area experienced some communal tension when BJP MP Ramshankar Katheria led a gathering of Bajrang Dal activists in an anti-cow-slaughter protest outside a local mosque. Enraged, the two sides exchanged a few volleys of stones before the administration brought tempers under control. The BSP MLA in the area, Zulfikar Bhutto, is one of the owners of slaughter houses in the locality. “I was not in town,” he tells Open, “I heard that some people tried to create trouble in that area. It was a minor incident that ended quickly.”

On 21 March, Parsedepur village in Raebareli district—but under the Amethi Lok Sabha constituency of Rahul Gandhi—saw a communal convulsion as two groups clashed and pelted stones at each other, injuring nearly ten people, gutting about a dozen shops in the area, and damaging six vehicles. The trouble began when some Muslims objected to a Shiv Baarat, brought out by a saffron organisation for the first time in the village, being taken through their neighbourhood. As in Agra, here too the administration acted rather swiftly, rushing additional police forces to the spot and defusing the tension.

The local administration may have been alert, but the sudden frequency of such incidents does not augur well for the BSP. After all, there are many who’d like nothing better than UP’s three-way tussle for Muslim votes to polarise all the rest in their favour, which could yield a prolonged period of communal strife. Mayawati could yet end up losing both Brahmin and Muslim votes.