She earned her reputation as a boxer in the 46 kg and 48 kg categories. At the Olympics, she will have to fight in the tougher 51 kg category. She says she’s ready 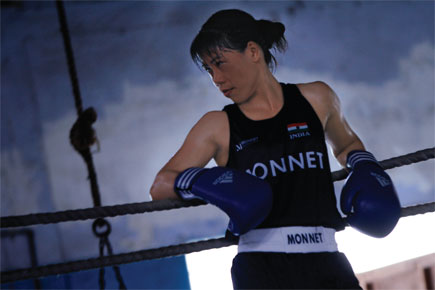 She earned her reputation as a boxer in the 46 kg and 48 kg categories. At the Olympics, she will have to fight in the tougher 51 kg category.


In about a month from now, 5 August 2012 to be exact, Mary Kom will start the most serious quest of her sporting life—to win a medal in the London Olympics. After five world championship titles, Mary is now single-mindedly pursuing her goal of becoming the first female boxer from India to win an Olympic medal.

“I cannot guarantee the result, but I can guarantee my preparation,” she says over the phone from her house in Imphal, Manipur. She has just finished her statutory 40-minute morning run. “I am prepared and will do all I can to win a medal for India. I had to move up two categories, from 46 kg to 48 kg, and now to the 51 kg category, to participate in the Olympics, and this meant I needed a little time to adjust to the specifics of the higher weight division. I have done that over the last one year with the help of my coach Charles Atkinson and my friends at Olympic Gold Quest who have done everything to ensure I get the best training in the lead-up to the Olympics.”

For Mangte Chungneijang Mary Kom, 5 August is a day of special significance. A little less than five years ago, she had given birth to her twin sons Renca and Nainai on that date, and hopes that she can make not just them but an entire country happy on their fifth birthday. As I write this, Mary is completing the last phase of her training in Balewadi, Pune. It has all been very scientifically structured for her by Team Mary Kom. She will be training in Balewadi till 25 July, when she travels to Liverpool for a week of acclimatisation. Finally, she will join the Indian contingent at the Olympic village on 2 August for the ten most significant days of her life.

The boxer from Manipur is already a legend. Winner of five world championship titles and awarded the Rajiv Gandhi Khel Ratna in July 2009, she returned from a two-year sabbatical to take a shot at the Olympics. Women’s boxing had made it to the 2012 Olympics and Mary wanted the most coveted medal of all. In the interim, she had had twins to look after. Since her comeback, she has done everything in her capacity to prepare herself for the Olympics. This includes weathering an emotional storm while preparing for the 2012 Asian Championships in Mongolia. Busy training in Patiala, Mary heard the devastating news that one of her sons, Nainai, had a heart problem and had been admitted to a hospital in Chandigarh. Emotionally drained but reluctant to miss practice, she used to visit Chandigarh every day after practice to spend time with the child. Onkholor Kom, her husband (Onler to friends and colleagues), was with her all the while, and they stood together against an adversity they had little control over. The story doesn’t end here. Mary went on to win the Asian Championship Gold medal, defeating Ren Cancan, the Chinese world No 1 and her archrival for the London Olympic gold. In doing so, she had avenged her defeat at Cancan’s hands at the 2010 Guangzhou Asian Games.

“I have not lost to the same boxer twice,” says Mary from her house in Imphal, where she spent a month relaxing after returning from the world championship in China, during our two-hour long conversation, “I had lost to Cancan at the 2010 Asian Games, but I beat her at the 2012 Asian Championships in Mongolia. I lost to Niccola Adams at the world championship in China, but will do better if I meet her in London.”

That statement, I realised, isn’t a boast. Mary has reason enough to feel confident. “Niccola is much taller than me and I had never fought against her before the world championship. It is always difficult to fight a taller boxer, and because I hadn’t faced her before, I wasn’t aware of her strategy or style. Now things are different. I have watched videos of all her fights, and I have also watched recordings of other European fighters who I might face in London. I have my strategies chalked out for each of them.”

Viren Rasquinha, CEO of Olympic Gold Quest and Mary’s most trusted advisor, concurs with her. “We have recorded every possible opponent that Mary might face in London. And we are confident that Mary can take on the best. She is a quick learner and is in the best physical shape for the Olympics.”

Rasquinha, however, also has a word of caution for Mary’s fans. “Most people in India believe Mary will win a medal in London because she has won five world championship titles in the past. How-ever, they don’t take into account the fact that she won each of those titles in the 46 kg category. In London, she is fighting in the 51 kg category because there are no 46 or 48 kg categories at the Olympics. It is a very steep jump for any boxer, and we have gone through the process gradually. We first got her to fight in the 48 kg category in the 2010 world championship, and finally pushed her to fight in the 51 kg category in 2011. Since Mary is blessed with talent, she has adjusted to the new weight division really well.”

An inspiration for thousands of Indian sportswomen, Mary Kom leads an extraordinary life as a sportsperson. On the day I spoke to her in Imphal, she first asked me to call back in an hour, saying she was busy with some household chores. It was enough to arouse my curiosity and when I called her back, it was the first question I asked. “I was making breakfast for Renca and Nainai,” she said, laughing, “They wanted to eat paranthas for breakfast, and when I am home I try and give them breakfast, lunch and dinner. I am a fulltime wife and mother when I am home, you know.”

Mary takes pleasure in taking charge of the household. “The maid hasn’t come today and I will also be doing the dishes in a while. Onler takes care of me all through the year when I am boxing. This is the only time I can take care of him.” A five-time world champion doing the dishes is simply unheard of, I thought to myself. It only happens in India and this is one of the reasons why Mary, irrespective of what happens in London, is already a legend.

What distinguishes Mary Kom from her contemporaries? Rasquinha offers the best answer. “She is naturally gifted. But talent can only get you to a certain level and no more. Mary is determined to put in the hours needed to fine-tune her talent and make it to the top. To come back after a two-year sabbatical isn’t easy, and when you add a 5 kg jump to the challenge, it is almost impossible. But Mary has adjusted well.”

Modest yet determined, Mary is forthright when it comes to answering critics who don’t expect her to win. “A few people had started writing me off,” she says, “According to them, I was too old and past my prime. I have just one thing to say to these people. Let someone come and beat me in the ring and take over from me. You first have to beat me to take over. Till then, please stop being critical of me.”

The criticism, she knows, will stop once and for all if she wins the yellow metal in London. And she does have a realistic chance. She has trained for every eventuality that may come her way in London. Sample this for preparation: she has trained with three male boxers in Balewadi. The first is taller than her and was chosen with Niccola Adams in mind. The second is a southpaw to get her up to speed with Ren Cancan’s techniques. And the third was chosen to get her to train with a physically stronger opponent. Under the guidance of Charles Atkinson, Mary has also done special endurance training to ensure she has her stamina intact in the last few seconds of a bout.

This has already been a year for India’s ageing sporting greats. First it was Leander Paes who won the Australian Open with partner Radek Stepanek, beating the formidable Bryan brothers in the final. Then came the much anticipated 100th international 100 from the most inspirational sporting icon of our time at Mirpur, Dhaka, on 16 March. Then it was Viswanathan Anand who, against all odds, won his fifth world chess championship, beating Boris Gelfand at the home of Soviet chess in Moscow. And finally, it was the ageing Mahesh Bhupathi who won the French Open mixed doubles title with his young—but old in tennis terms—partner.

This has already been a year for India’s ageing sporting greats. First it was Leander Paes who won the Australian Open with partner Radek Stepanek, beating the formidable Bryan brothers in the final. Then came the much anticipated 100th international 100 from the most inspirational sporting icon of our time at Mirpur, Dhaka, on 16 March. Then it was Viswanathan Anand who, against all odds, won his fifth world chess championship, beating Boris Gelfand at the home of Soviet chess in Moscow. And finally, it was the ageing Mahesh Bhupathi who won the French Open mixed doubles title with his young—but old in tennis terms—partner Sania Mirza. At 29, Mary is younger than most of the luminaries mentioned above. Is it her turn?