Why did Aligarh Muslim University’s students and teachers not raise their voice when a professor was publicly humiliated for being gay? He is dead now. And we need an answer. 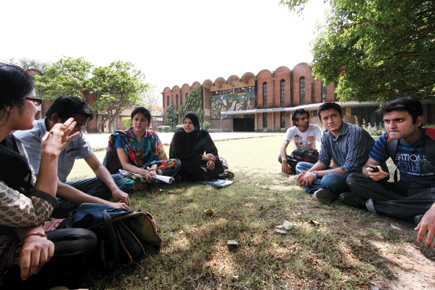 Why was there no protest when a professor was humiliated for being gay? He is dead now. And we need an answer.


It was one of those moments that had the potential of becoming iconic. A university campus with a mighty reputation. A gay teacher suspended by the administration after his sexuality was made public by a dubious sting operation by the ‘media’. Thirty thousand students. A landmark judgment passed by the Delhi High Court less than a year ago legalising homosexuality. Bring on the mass protests. The TV news channels would have loved to lend their Prime Time support to the cause. A month passed… Nothing. The Marathi scholar who had spent 22 years at Aligarh Muslim University (AMU) was evicted from campus. Still nothing. The silence of students and fellow faculty members was deafening. It just didn’t make sense.

Earlier this month, eight days after the Allahabad High Court stayed the suspension of Dr SR Siras and he returned to campus vindicated, he was found dead in his house. All eyes were on AMU again. There was no public reaction. Not from students, nor anyone else on campus.

It was left to online networks—the AMU Facebook community, for instance—to register whatever reactions from students and alumni there were. Thus did Open visit the campus.

A little background. Last October, protests over the murder of a student were clamped down upon and the campus shut sine die. Student demonstrations reached Delhi, demanding ‘restoration of dialogue, campus democracy and a students union’, among other things.

Five months after it was re-opened, an uneasy calm prevails on AMU’s campus. The academic term is nearing an end, and students are in exam mode. It is a week after Dr Siras’ death.

It was not as if his sexual orientation was unknown before the sting operation. It isn’t as if there aren’t other undeclared gay teachers on campus. And it wasn’t the first suspension of a teacher on grounds of sexuality. No one knows why this scandal, and why Dr Siras’ case—forget conspiracy theories—has proved so volatile.

So what is the buzz on campus? “Most people are not ready to talk about it… No one is opposing it. Even people who are in favour of it are not speaking out. And that has a lot to do with the environment on campus and the politics around the issue,” says Asma Shakir, a first year student of English language teaching.

The silence on campus, says Tariq Islam, who teaches philosophy at AMU and was among the few who spoke out in favour of Siras, is a fact. “For the past so many years, teachers have been silent on virtually all issues,” he adds, “And this was a fairly controversial issue, and so the silence was even more so. People the world over are getting depoliticised. And AMU is no exception to this trend of depoliticisation.”

That is not to say there weren’t very real local influences that perpetuated the ‘don’t know, don’t care’ attitude. Adil Hossain, a first year mass communication student, attributes it to a ‘culture of fear’ that he alleges exists on campus these days: “To protest is to jeopardise your career… We are trained not to be concerned. We are taught not to raise issues because it is seen as bringing disrepute to the university.”

The ‘fear psychosis’ that students talk about does not seem out of place, given that the campus has about 50 CCTV cameras, and the administration runs a spy network called the Local Intelligence Unit that has 11 students on its payroll. And that is official: a response to a Right to Information application filed at the Proctor’s office last year confirmed it.

The university’s public relations officer Rahat Abrar, however, maintains that surveillance systems are for the security of students and to prevent law and order problems on campus.

Returning to the question of why there was no public protest, Nabeel Mehdi, a first year electrical engineering student, has a different take. “The media is calling it ‘Talibanisation’ and painting a wrong picture of AMU. The issue has become political. That’s why students don’t want to concern themselves with it. They are not going to come out on the streets. They are here to study. They don’t want the campus shut down again.”

But to Hossain, the question is straightforward. “How can this be made a political issue? It is about right and wrong. Was the administration right to take cognisance of a sting operation and suspend a teacher for his private sexual orientation?”

While there is near unanimous condemnation by students of the blatant breach of privacy, the consensus weakens when it comes to the question of homosexuality—adding another dimension to why AMU’s student reaction is so muted.

Faraaz Farooq, who plays for a campus rock band called Brown Curry, and is doing his bachelors in architecture, explains it best: “There is no doubt that he was discriminated [against]. He was hunted down like an animal. But we cannot do anything about it. This is telling you like it is. Aligarh is a small place. If I and my friends take out a rally—although we are not gay, and, personally, I wouldn’t like my friends to be gay—we would be branded as gay. And that is not something anybody wants.”

Would reactions have been any different if, say, this had happened in Allahabad University or Banaras Hindu University? Perhaps not. “Any small town would have reacted in a similar way. This is not a metro. Homosexuality is a taboo subject… If you ask for my opinion, it was wrong to suspend him. The sting was a breach of his privacy. But social constraints prevent us from going on a platform and declaring our opinion,” says a third year computer engineering student who does not want to be identified.

Madihur Rehman, who teaches at the English department, calls the quiescence of teachers on Siras a “collective shame” for the university community. “Why have they been so silent?” asks a plaintive Rehman, “As a community, as an intellectual body, there has been no reaction from this campus. That is really troublesome… The university should have expressed unqualified solidarity with Siras. If that had happened, perhaps a life could have been saved.”

Rehman recalls how in 1973 a similar case was brought up by students but the authorities had refused to take action because it was considered the teacher’s private affair. It is as if time has moved backwards since then. “Siras is not the first and last homosexual. If people have to be suspended on the basis of homosexuality, then 20 per cent of the teachers will have to be suspended. Why was he singled out? Homosexuality is common. People know it and they don’t react to it.”

Touchy aspects of religious orthodoxy tend to complicate the issue even more. Among students, there were several who justified the action taken against Siras on the premise that AMU, above all, is a ‘Muslim university’. “The argument that anything that goes against the Muslim ethos and culture shouldn’t be allowed is a dangerous one,” says Rehman, “What about teachers who drink, who do not offer prayer five times a day? Are they also going to be suspended? Any institution in a country like India should be governed by the law of the land, not by attitudes of people who happen to be a majority or at the helm of affairs.”

Siras was a loner on campus. He had no political affiliations. Perhaps that too was a reason why there was no active interest in his case. So while people privately opposed the move by the administration, there was no public support for him.

The Department of Modern Languages, of which Siras was chairman, has less than ten students. For the last couple of years, there had been no students for Marathi. Had he been teaching a more popular subject, maybe he would have found a ready support base to rally around him.

Hence, the silence. Says Tariq Islam, “No doubt, the silence that was there before Siras’ death is still there to a certain extent, but there is regret and remorse that has set in among teachers.” He adds, “There is that feeling that this was not the fate he should have met. What is being regretted is that not sufficient support was given.”