Man in a Hurry

Narendra Modi is moving too fast for his own party 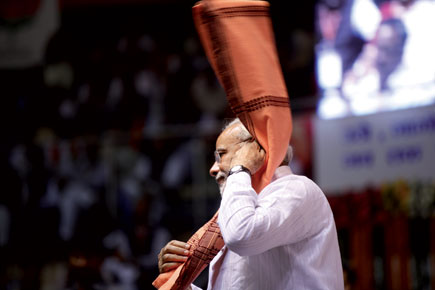 Narendra Modi is moving too fast for his own party


Gujarat Chief Minister Narendra Modi had a good working weekend in New Delhi last week. And, even though the Bharatiya Janata Party’s top leadership continued to drag its feet on declaring him its prime ministerial candidate, Modi descended on the capital for the party’s National Executive and Council meetings with the air of a leader who saw the declaration as a mere formality.

Modi’s conduct at the three-day affair made his message to doubters amply clear: he would not wait for them to decide. In his address to the BJP gathering in Delhi’s Talkatora indoor stadium, in which he was supposed to speak on ‘good governance and development’, Modi virtually launched the party’s campaign for the next Lok Sabha election. Modi, in fact, took off from where he left the last time he was in New Delhi, which was late-December at the party’s Ashoka Road headquarters, where he was greeted with chants of “PM! PM!” by party workers and small-time leaders.

At that time, Modi had tom-tommed the Gujarat model as an alternative to the Manmohan Singh Government. Gujarat, he had said, was competing directly with China while the Centre was lagging far behind. Two months later, in the capital again, Modi was talking not only of the UPA Government’s failures but of flaws in the Congress party’s DNA: of a fundamental Congress-BJP clash in the offing. If the CMs of Madhya Pradesh and Chhattisgarh, Shivraj Singh Chouhan and Raman Singh, used the platform to showcase their state-level achievements, Modi addressed the gathering as the commander of a political formation going into electoral battle. This he did by launching a frontal attack on the Nehru-Gandhi dynasty.

“The Congress does not have it in its blood to do something for the country,” said Modi, “It is the Congress’ culture to sacrifice the interests of the nation for the interests of one family.” Ironically, despite his attack on the rival party’s personality cult, it would augur well for him if the typical BJP worker were to see the next Lok Sabha election as a clash of personalities at the top, as a direct contest between Modi and Rahul Gandhi, rather than smaller electoral battles fought in 542 Lok Sabha constituencies on myriad local factors apart from national issues. Such a face-off strengthens his pitch for the top slot within the BJP. Modi also knows that the rising clamour of the party rank-and-file for his leadership of the Lok Sabha campaign would force the BJP to yield sooner or later. The fact that he was singled out for special treatment all through the three-day conclave would only have reassured him of this.

Of late, there has been a striking similarity in the way BJP workers have hailed Modi as their great electoral hope and the way Congressmen have cried themselves hoarse asking for Rahul Gandhi to be granted ever more power in party affairs. Neither party is short of attention-seekers and sycophants. It is just that BJP leaders—barring a few—trying to outdo one another in praising Modi in Delhi is so novel, that every utterance is being examined for its nuances by observers.

The newly-appointed BJP President Rajnath Singh set the tone early at the Talkatora gathering by asking the 1,200-plus attendees to welcome Modi with a standing ovation. Singh also announced that he would perform the ritual of garlanding Modi on behalf of the party for his electoral successes in Gujarat. Yet, for the president of a party that senses power within sniffing distance, Singh’s inaugural speech lacked coherence. It touched a wide variety of issues, ranging from cyber attacks to Ram Setu and Swadeshi, but had little gravitas. Consider this gem: “Friends, people generally talk about naamrashi (astrology-derived name). Sometimes, nature gives the solution of a problem in the same name. For example, Rama killed Raavan, Krishna killed Kansa, Obama killed Osama, and similarly we believe that Corruption will kill Congress.”

In his speech the next day, Modi duly grabbed his opportunity to fill the void left by Singh. Instead of speaking about his achievements in Gujarat, he adopted the tactic of decoupling the Gandhi dynasty from the rest of the party, which according to him has traditionally had two sets of people: self-serving sycophants of the dynasty and those who wanted to do something for the country and eventually quit the party. “This country has had only one Prime Minister whose gotra (lineage) was not the Congress gotra. That was Atal Bihari Vajpayee. All other prime ministers have been of the Congress gotra,” he said, citing the examples of Charan Singh, Chandra Shekhar, VP Singh, IK Gujral and Deve Gowda. “Till the time they were in the Congress, they did not have a future,” he said, “After they left the Congress, they became prime ministers.”

Modi dubbed the late Sitaram Kesri a “night-watchman” Congress president who was cast away once Sonia Gandhi was ready to take over in the late 1990s. In the same vein, Modi suggested that Prime Minister Manmohan Singh too was a night-watchman, brought in only to warm the seat for another scion of the dynasty. “But they did not realise that the night would be so long and so dark,” he said, taking a swipe at Congress Vice-president Rahul Gandhi’s reluctance to take over from Manmohan Singh and at the UPA’s poor show of governance. The Congress has saddled the country with “a bunch of five-star activists”, Modi said, referring to the National Advisory Council, as a way to keep Manmohan Singh from putting his international standing to good use. “If they had made Pranab Mukherjee the Prime Minister instead of Manmohan Singh, the damage would have been less, perhaps,” he added, “[But] they thought if Pranab Mukherjee is successful, then what will happen to the [Gandhi] family?”

Modi went on, using hyperbole and hypotheses to keep his audience enthralled. Much of his 55-minute speech was a pep talk for party workers. “Perhaps after many years [this time], not just the country but the whole world is watching the BJP’s national convention… The continuance of this government in Delhi is a big challenge for BJP workers. It has ruined the country,” he said, “The Congress is like termites in the country’s foundations. It is hard to deal with termites. You finish them in one place and they emerge in another. The only medicine for this ailment is the sweat of BJP workers. Only this sweat can free this nation of Congress termites,” Modi said, amid repeated bouts of thunderous applause.

“The time has come to draw a comparison between the Congress and the BJP. While the BJP is for a mission, the Congress is for commission. The contest will be between mission and commission,” he said. “My experience in Gujarat has been that the country has decided to move ahead. People of the country have decided to throw out the Congress. Our only concern is to fill the places vacated by the Congress with the right people,” Modi said, sounding a warning to his party that it would suffer if it failed to grab this chance to take over from the Grand Old Party.

“We should go from here with the pledge that we will contribute all our might to the party,” said Modi, “The BJP and the lotus, the symbol of the BJP, have the strength to save this nation. Who the individual is, who the leader is does not matter. The aim is important. We have no right to disappoint people.”

Modi’s address was clearly the highlight of the BJP meet. But other speeches did not go unnoticed. LK Advani, in his speech at the session’s conclusion, hinted at a scenario in which “the leader” would be Sushma Swaraj instead of Modi. Swaraj’s oratorical skills were like Vajpayee’s, Advani said, they gave him a complex. “When I heard Sushmaji, I thought her speech was the best speech to conclude the proceedings,” he said, adding that Swaraj had diagnosed the party’s problems accurately and offered apt directions on how to deal with them.

Advani’s words were not a surprise. Not too long ago, the party’s internal politics was overshadowed by his own prime ministerial ambitions. He was among the last leaders to realise that it was too late for him to become Prime Minister. But ever since the realisation has dawned on him, he has been backing Swaraj for the PM’s post.

It is another matter that the list of those who consider themselves worthy of the slot is rather long. The Rashtriya Swayamasewak Sangh’s initial resistance to Modi as the BJP’s prime ministerial choice was blunted last year after the party’s poor performance in the UP Assembly polls. The RSS had been counting on its appointee Nitin Gadkari, who in turn had entrusted the UP campaign to Modi’s bête noire Sanjay Joshi.

Joshi’s failure to deliver the state to the BJP gave Modi a chance to rub the former’s nose in and ridicule the party’s national leadership. After the UP debacle, Modi was able to get Joshi to quit the party’s national executive. And once Modi won Gujarat for the third time, he knew that the RSS would have no excuse to resist his clout anymore.

In January, as it turned out, facing serious charges of corruption, Gadkari had to bow out of the party’s presidential race at the eleventh hour. With Gadkari out of the reckoning now, the RSS had little choice but to back Modi’s candidacy. Sources within the party say he is likely to be given a seat on the party’s par- liamentary board when the national executive is restructured later this month. Even this move has had a ring of inevitability to it.

The longer the party’s top brass delays a decision to project Modi as its choice for the next election, the louder the cheers for him get. This has been the trend so far. Little wonder that he believes he does not even need a formal announcement anymore.