In a Bengal that has shed ideals and ideology for pragmatism, politics still swirls around Mamata Banerjee, loved by the bustees and dismissed by the bhadralok. The Didi paradox 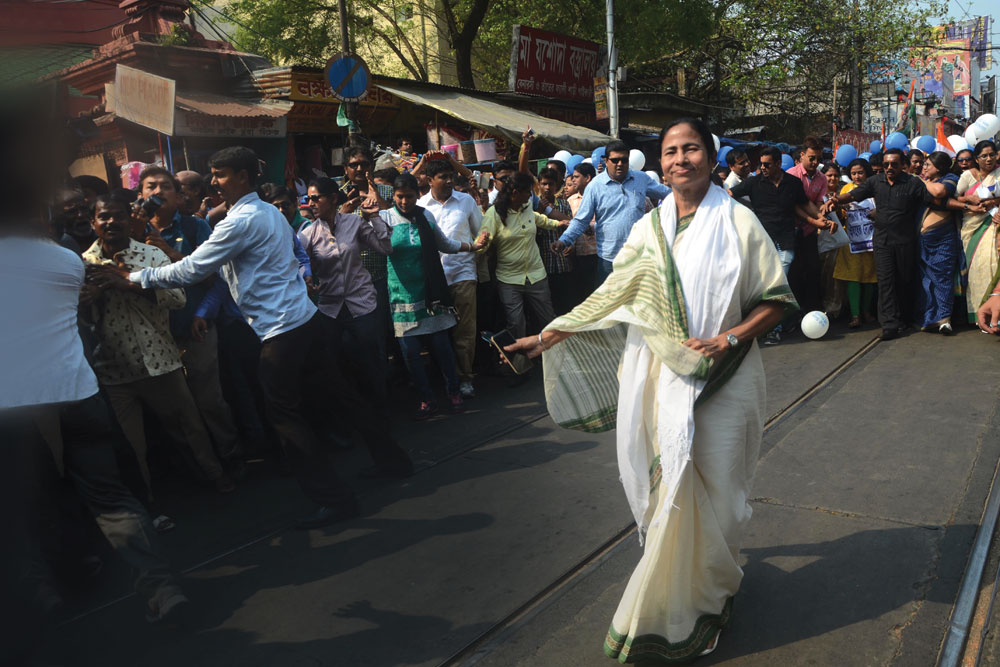 MAMATA BANERJEE AND Narendra Modi are two sides of the same coin. Both are loners. Both dramatise themselves. The home for both holds areas of darkness no outsider dares penetrate. The greatest similarity is an unflinching sense of mission that translates lower middle-class, perhaps even working class, yearnings into determined political agenda. Where they differ most sharply is in the interaction of personal and public space. Modi is a “brilliant events manager” (quoting Lal Krishna Advani) who has turned the world into a private stage on which he alone dazzles. For Mamata—“I don’t have a personal life”—life is politics, politics is life.

Her enemies are everywhere. “They might even kill me” she says, recalling 1990 when she wound a red rag round her supposedly battered head. They tried to discredit her through the Saradha scam, which might have ruined 18 lakh people who had hoped to become rich by sinking their savings into chit funds that promised cash returns no tax man would ever hear of. Those trusting folk would have been reduced to beggary if Didi hadn’t rushed to the rescue with a Rs 500-crore relief fund. She even urged people to smoke more so that a tobacco tax raised money for the victims. The scam didn’t damage her fortunes in the Lok Sabha, panchayat or municipal elections. People still call her ‘Maa Durga’. She personifies hope in the slums of Calcutta and the villages of Bengal where 70 per cent of voters—80 per cent of whom are marginal peasants or landless labourers—live.

She is one of them. She must be one of the very few women politicians of consequence to have risen to eminence without the help of a man. Unlike Tarakeshwari Sinha in Bihar, Orissa’s Nandini Satpathy, Tamil Nadu’s Jayalalithaa or Mayawati in Uttar Pradesh, she hasn’t reinvented a glamorous self. Didi remains the ultimate in simplicity. She is the prisoner of her class. “I will turn Kolkata into London” sounds stupid only to those who know London. For millions of Indians—especially Bengalis—London is the aspirational Elysium. Lighting up Kolkata like an amusement park with strings of blue and white bulbs may seem cheap and showy. Not to villagers who, bussing in for the obligatory tour of Kalighat, jadu ghar (Indian Museum) and the chiriakhana (zoo), think they have stepped into a twinkling fairyland.

With her finger on this pulse, Didi well knows what indulgences they wouldn’t tolerate. She would not dream of having ‘Mamata Banerjee’ woven into her sari. Nor would she boast of her buddy ‘Barack’. Self-respect might even have persuaded her to decline a Buckingham Palace invitation to lunch if Queen Elizabeth hadn’t also asked her to spend a night or two under the royal roof like China’s Xi Jinping. Not that she boycotted the Palace. Hearing that Her Majesty’s second son, Prince Andrew, was interested in teenage girls, she went there and heard all about his involvement in a project for trafficking victims in Kolkata. Naturally, Mum wasn’t present. This was no concocted affair (sajano bepaar).

Her actions and decisions often seem erratic. Sometimes she does seem to reflect the comment by Blaise Pascal, the 17th century French intellectual, “The heart has its reasons, which reason does not know.” Often, however, shrewd calculation underlies whimsicality. Those who mock her as ‘Mumtaz Banerjee’ because of favours showered on Muslims might be tempted to endorse Pranab Mukherjee’s belief “It is impossible to argue with Mamata because she defies logic”. Actually, she is pandering to a constituency that accounts for at least 27 per cent of the population.

However vitriolically she is criticised in sitting rooms, seminars and in newspapers, her constituents, with no access to any of these forums, swear by her. Bengali society is polarised as never before. The bustees and villages love Didi. The middle-classes love to hate her. A handful of entertainment industry stars, academics and retired bureaucrats have jumped on her bandwagon and are making hay while the sun shines. But this elite’s voice is seldom raised in her defence. Derek O’Brien—whom she sent to the Rajya Sabha—has been her lone public champion since Maya Ray, Siddhartha Shankar Ray’s attractive and talented British-born wife—a barrister and Lok Sabha member—died in March 2013.

Maya’s husband, Deshabandhu Chittaranjan Das’s grandson, would say Mamata and not the Pradesh Congress Committee wore the Congress mantle in Bengal. The Rays admired her grit. They were convinced that if anyone could rid the state of the Marxist- dominated Left Front, it was the woman all their friends and colleagues derided as a fishwife. Didi didn’t forget their faith in her. Unveiling Ray’s portrait after she was sworn in on 20 May 2011 as Bengal’s first woman chief minister, she regretted he did not live to see his dream of a change of government realised. When Ray died in November 2010, I went round to find the widowed Maya sitting alone with her sister Chaya visiting from London, Ray’s body in the next room, and not another soul in the silent house. Punjab lowered the Tricolour to half-mast in honour of its former governor; Bengal didn’t for its last Congress chief minister. Sonia Gandhi who had flown to Kolkata for Jyoti Basu’s funeral sent a condolence message two days later. But Maya told me Mamata had just left. “She’ll be back. She’s making all the arrangements.” So she did. She walked with the hearse and was present when the last rites were performed.

However vitriolically she is criticised in sitting rooms, seminars and in newspapers, her constituents, with no access to any of these forums, swear by her. Bengali society is polarised as never before

With elections to the 294 Assembly seats starting on 4 April, Mamata feels she is being attacked from all sides. The paranoia is understandable when even implacable enemies like the Marxists and Congress consider burying the hatchet over—shades of Indira Gandhi!—a one-point programme to get rid of her. Predictably, the “Tui chor, tui chor” (You’re the thief, you’re the thief) cries that resonated in the Lok Sabha in the wake of the Narada sting operation revelations clanged in her ears like the tocsin of a conspiracy to bring down what she calls India’s most honest political party. One doesn’t know the truth of the charge against 14 Trinamool luminaries, or whether three MPs really did voice criticism at an ‘informal’ meeting. But she must know that some Trinamool politicians denounce her behind her back as energetically as they praise her in her presence.

DIDI’S STRATEGY COULD explain the paradox. She ropes in the glitterati either because they attract votes or because they give a gloss of respectability to her flotsam and jetsam party. But she has little respect for their political skills, and no further use for them once she has bought their ‘loyalty’ with a legislature ticket. A distinguished and self-respecting professional like Subrata Maitra, who died on 17 March, preferred his independence to her offer of a portfolio but remained Mamata’s friend and doctor. Newspapers claim the economist, Abhirup Sarkar, similarly disregarded the dangled carrot of finance ministership, becoming chairman instead of the West Bengal Infrastructure Development Finance Corporation.

Like Indira Gandhi who went over the heads of party functionaries for whom she had only contempt, Mamata feels her real discourse is with the people. A small shantytown near my house used to be flooded if a cat peed, as the Bengali colloquialism went. “Not since Subrata came”, explained a resident, familiarly referring to the Minister for Public Health Engineering, Subrata Mukherjee, once a famous Youth Congress tough. Mukherjee is also credited with fully utilising NREGA funds (previously returned unused) to pipe water to villages. Manish Gupta, a former IAS officer who holds the Power portfolio, also inspires gratitude. According to a study by the Council on Energy, Environment and Water with Columbia University’s Department of Political Science, and supported by the Shakti Sustainable Energy Foundation, Bengal leads India. Not only has electricity reached almost all villages, but 93 per cent of rural households have power.

Roads are better maintained (except for sections of the Centre’s 625-km Barasat-Siliguri NH 34), and food procurement is more effective, thanks to additional collection centres and the Cooperative Marketing Federation known as Benfed. Most improvements date back to Mamata’s advent. Bengal’s Gross State Domestic Product was 6.58 per cent that year against the national average of 6.21 per cent. As the Business Standard recorded, ‘In the year 2011-12, Bengal saw a 14.88 per cent growth in per capita income over the last year, which was higher than the all-India average of 13.64 per cent’. The spurt is attributed to a mushrooming of small unregistered entrepreneurs who squat on public land and pavements, slipping money into the pockets of unscrupulous politicians and policemen but also adding to productive activity. Didi’s “We have completed 100 per cent of the work we set out to do” boast was obviously hyperbolic but the state is not quite the limping laggard it once was.

Much is still wrong. Sitaram Sharma, a Calcutta businessman, says in his book West Bengal: Changing Colours, Changing Challenges, Mamata has a Cabinet but no colleagues. Angry with the Election Commission for doubting police impartiality, she blurted out that American cops could be imported. “We will pay their salaries. They will sleep in the fields and the villagers will feed them!” Her tantrums are legendary like her outbursts against the media. Like the Red Queen shrieking “Off with his head!” in Lewis Carroll’s Alice’s Adventures in Wonderland, she denounces people as Maoists. Some victims, members of a group called Akranto Amra (We the Attacked), have threatened to contest the polls. She has parted company with several prominent Trinamool politicians under unexplained circumstances. One of her candidates, Madan Mitra, former transport and sports minister, is in jail over the Saradha affair. The CBI considers him ‘too influential’ for bail. Those who expect principles in politics ask why the Narada revelations haven’t prompted her to step down since she left the NDA in high dudgeon after the Tehelka expose because George Fernandes’s resignation wasn’t accepted.

Bengalis have shed ideals and ideology for pragmatism. The promised Poriborton (change) is translated as rice at Rs 2 a kg, cycles for college students, shoes for schoolchildren, free education for girls, and other largesse for voters. But Bengalis also want jobs. An important reason why the Left Front fell was that having regenerated the countryside, it didn’t meet the revolution of rising expectations by inviting industry. Didi’s fierce campaigns against a Special Economic Zone at Nandigram and Tata’s car factory at Singur have made industrialists even more chary. For all her undoubted achievements, charisma, energy and burning desire to do something for Bengal, Mamata Banerjee lacks the vision, manpower and organisational support to seek a permanent solution to long-standing economic problems. She is a flash in the pan in the continuum of Bengal’s history.