How Mamata Banerjee became the new Left in West Bengal 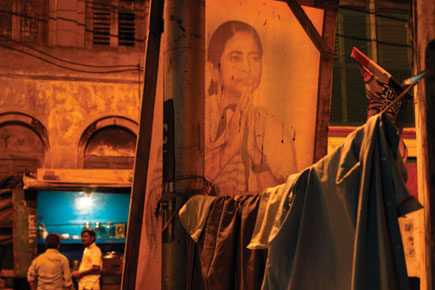 The story of how Mamata Banerjee became the new Left in West Bengal.


The story of how Mamata Banerjee became the new Left in West Bengal.

KOLKATA ~ On the night before the West Bengal election results, an armoured vehicle and a few nervous policemen stand guard at Kolkata’s Park Street, next to a pillar almost laid low by daily drenchings of betel nut juice. For pimps outside the Park Hotel, it is business as usual, offering ‘butterfly massage’ by college girls and housewives to a chosen few who walk by. So too for book vendors, waving copies of Amitav Ghosh and Arvind Adiga novels in cellophane wrappers. They take short breaks to talk of the next day’s results. “Didi is coming,” one says. Another raises a fist in the air and says Bengal needs ‘poribartan’—change.

At Someplace Else, a posh bar on Park Street, a small crowd that has gathered also appears ready for the next day’s change. There is live music in the air. The lead singer is a girl, her curls flying like shrapnel in slow motion as she sways her hips to racy numbers. A fat man in his late thirties, drunk and reeking of some costly perfume underneath his Hawaiian shirt, seems hellbent on grabbing her attention. He insists that she sings Dylan’s Blowin in the Wind. She ignores him at first, and the next time round, says, “That will be tomorrow. For change. It’s high time.” And she sings some other song, Ben King’s Stand By Me. As she sings, veins appear on her broad forehead in a ‘V’, her delicate fingers float in the air, and her audience goes into a sort of trance. Under the arclights, she looks divine. But once she alights from the platform to make her way through the audience, she looks quite ordinary.

For some three decades, the Communist Party of India-Marxist (CPM) in West Bengal had voters in a thrall quite like the singer’s. On a pedestal held high by the romance of its ‘people’s revolution’, it held a hallowed image for those who supported it at the hustings without batting an eyelid. The party scored seven consecutive terms in power, something no Communist formation anywhere in the world had ever done. But up close, the idea of electing what turned out to be all-so-ordinary sounds like a tragedy now.

The tragedy is acute for those who must play pallbearers of the CPM in its own bastion. Next to a coffee house on College Street, in a small room, 65-year-old Salil Biswas stands next to an exhibition of photographs of Rabindranath Tagore’s house, pictures he took himself, and sighs. “I am heartbroken inside,” he says, on the eve of the results, referring to the passing of the state’s Communist regime. “The Trinamool will be here courtesy the CPM,” he laments, “You can say that Buddha Babu has rolled out a red carpet for Mamata Banerjee.” But, he adds, almost rubbing his palms, he is sure of one thing: change is important.

The Biswas family have been CPM loyalists. Salil’s father was a CPM functionary who worked among dock workers. “My father died in 1971, and even then he had begun to get disillusioned with Left politics,” Biswas recounts. A year before he died, the senior Biswas had planned to stage a play among dock workers, a Chinese drama called One Day in the Shanghai Harbour, on the plight of dock workers. But he was not allowed to stage that play by his party. “Because it raised issues they were uncomfortable with. I can tell you that the CPM has been anti-people in its rudimentary form since the beginning,” he says. But that did not dissuade him from becoming a CPM supporter. Over the years, though, having seen the decay of leftist politics closely as both a supporter and college principal, he felt disgusted with the ways of the party.

Left insiders say that the CPM in West Bengal had become a giant octopus and its nerve centre had no control over its tentacles. They talk of how nothing moved without an endorsement of the CPM cadre. If you wanted a job, you needed CPM approval. To lodge an FIR at a police station, you had to take a party functionary along. “It almost reached a stage where the CPM would decide what you’d cook for dinner at home,” says Biswas.

Subash Ranjan Chakraborty, 63, a senior Bank executive, returned to Kolkata after 27 years on his retirement about three years ago. He had served in various positions across India in places like Bihar, Orissa and Delhi. Back in his own hometown, he felt suffocated. And fearful.

As a college student, he remembers getting attracted to the Left. “Let me put it this way, the Left appealed to the average Bengali gentry, the Bhadralok. We felt that those who were Left leaning were more educated,” he says. Later, he went wherever his job took him, and would return annually to Kolkata only to see things deteriorate. “I used to meet friends, and they would say, ‘Subash, things are different. You have to toe the line.’” He says that the CPM gave its cadre Stalinesque regimentation and expected it to control everything it could. Even interviews for government jobs served as enforcement tools; one of his friends who had applied for a teacher’s post was asked by the interview committee what he did after the classes. “I play sitar, sir,” he replied.

“Sitar!” the head interviewer scoffed, “Why can’t you do party work after that?”

Over the past three years or so, Chakraborty says he’s been afraid of sharing his inner feelings even with close friends. “I felt alien in Kolkata,” he says, recalling the day a gang of CPM boys arrived at his doorstep for a donation. “I don’t give donations to political parties,” he told them. And then he froze for a moment. “I realised the folly of my decision. I realised that I might be targeted later,” he says. He didn’t make a donation, but, as a safety measure, dropped the name of a senior CPM functionary.

The fear in rural areas was even worse, since the control of the local CPM cadre was even more stringent here. A few years ago, in Murshidabad, 5,000 mango saplings were sent for distribution among the farmers. But government officials were not allowed to decide who got them. It was the village headman, a CPM leader, who picked farmers. In areas like Lalgarh that would later erupt in violence, local CPM leaders made their own fortunes while people around them continued to live in abject poverty.

The CPM cadre kept a tight grip on everything, even the issuance of Below Poverty Line cards for the poorest of the poor, with the arrogance of party leaders taking monstrous proportions. Voters, they would say in menacing tones after an electoral setback (such as the municipal polls that the Trinamool swept), were making a grave error.

The last straw was the state government’s armed action in Nandigram, where the CPM shed its pro-poor pretensions in favour of a brutal land acquisition exercise for industrial development. Several resistant villagers were killed, maimed and raped. The shockingly casual response of the state’s CPM leadership shamed the party’s intellectual support base so severely that it never recovered. Former Chief Minister Buddhadeb Bhattacharjee remarked that “people (in Nandigram) had been paid back in the same coin”. It was the sort of line expected of Narendra Modi in Gujarat, not a Left leader in Bengal. By the time Nandigram found an echo in the events of Singur, the revulsion was palpable. And Mamata, on a moral high—ready to side with the poor and attack the Left from its left.

The rural resurgence of the far left has also been a factor in the rout of the CPM. It relieved villagers of the party’s fear. In 2009, backed by Adivasis, Maoists had gained effective control of an area in and around Lalgarh. Though the CPM staged a partial comeback with the help of police and paramilitary forces, the party could not recover from the ripple effect on how it was seen by Adivasis and others. Some of the CPM cadre’s acts, of late, have been utterly shameful. “Their cadres defecated in about two dozen wells around Lalgarh. The people could not get water to drink. Is this what a supposedly pro-poor party does?” asked writer-activist Mahashweta Devi. “The CPM has simply done nothing for long. The food minister does nothing. The education minister does nothing. The health minister does nothing. This time, the poor will rise, those whose voice the CPM never heard,” she said, before the polls.

In his small office, 52-year-old Suvendu Chatterjee sits smoking a cigarette, and he waits for the fall. A radical Leftist who once handled a German Colt Revolver in his hands, Chatterjee now runs a media agency. “Even if it is for ten days, we need change,” he says. He remembers attending Buddha Babu’s rally after he took over from Jyoti Basu. “After Jyoti Babu left, we thought things will be better. Jyoti Babu was a man of refined taste. He took his afternoon nap and sipped his Black Label in the evening only with two close friends. Buddha Babu held some promise of revitalising the Left in West Bengal. But then he himself turned into a megalomaniac. Somebody should have told him that Marquez and arrogance don’t go hand in hand.”

The biggest challenge for the gutsy woman who danced atop JP’s car outside Calcutta University all those years ago, as a Congress activist, had been to gain the approval of Kolkata’s intellectuals. But their disdain for the Hawai chappal-wearing Mamata Banerjee—who read no Marquez, or at least made no mention of it—has been turning into an appreciation of her perseverence.

At her Kalighat home now, Mamata Banerjee savours every moment of it, emerging after the results to declare: “Only development, no autocracy.” Around her, fountains of green gulaal—the party colour—whoosh joyous to drum beats. Red Bengal is now green.