Why is the famous port city that once opened itself to the world turning increasingly petty? 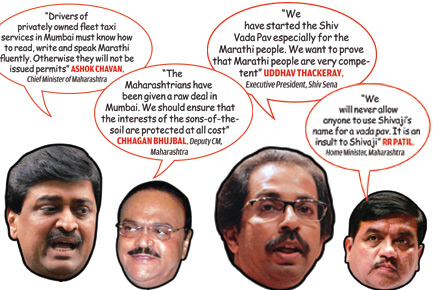 Why is the famous port city that once opened itself to the world turning increasingly petty?


Fifty years ago, when Maharashtra became a separate state of India, its founding fathers would never have dreamt it could collapse inwards under the weight of insularity, ignorance and intolerance. It was, after all, not just a state with an outward orientation, but an inheritor of dozens of social reform movements all through history, movements with all-India ambitions.

But half a century is a long time. Today, Maharashtra makes national news for everything its revered thinkers stood four-square against—prejudice in a blistering variety of forms, be it caste, creed or choice of communication. The worst of it crops up in the rhetoric of right-wing political parties like the Shiv Sena (and now its splinter Maharashtra Navnirman Sena or MNS) and the tough tactics adopted by such groups as the Swabhiman Sanghatana, Maratha Mahasangh and Sambhaji Brigade, but that is not all there is to it. In living rooms across Mumbai and other cities, religious and regional minorities often bear the brunt of irate rants that should offend the sensibilities of the well brought up.

That street violence no longer appals people in Mumbai is a sign of the perverse turn that politics has taken. At the core of it is the issue of Marathi pride, an issue said to stir such stout sentiments that politicians play along with them purely on reflex. Be pro-Marathi, they chant in their heads, what this means can come later. Marathi asmita (pride) is a very ambiguous term,” explains a well-known historian of the state, “What constitutes this? They are all capitalising on Shivaji’s legacy since he is a revered figure in Maharashtra. The real history of Shivaji has been tampered with and an imagined history has taken its place.”

The state’s Congress-Nationalist Congress Party (NCP) led Democratic Front government operates on the same mantra. Its latest Social Policy of Maharashtra makes it mandatory for all state bureaucrats to speak only in Marathi. No other language is permissible, whether they’re holding meetings or speaking with foreign visitors (‘This way the state will be creating an extra job of a translator,’ reads the policy).

Uddhav Thackeray, executive president of the Shiv Sena, wants the policy implemented at all levels. “Then Ashok Chavan should talk to Sonia Gandhi in Marathi,” he has gleefully declared, “He is the chief minister of a Marathi state.” The CM has also been getting his share of jibes from the bureaucracy, which is busy making jokes about testing English translators purely in Marathi.

The state cabinet has still not lived down its earlier attempt to restrict Mumbai taxi drivers’ jobs to those with Maharashtra as their domicile for at least 15 years and who can read, write and speak Marathi. A blatant move to keep out drivers from Uttar Pradesh and Bihar, who run a large number of the city’s cabs, it took widespread protests before it was revised (Hindi and Gujarati fluency is an equal qualification now).

Raj Thackeray, chief of the MNS, predictably wants a reversion to the stricter rule. “Only Marathis must be given permits,” he thundered, “If all the 4,500 permits to be issued in the first phase are not given to Marathis only, the MNS will not allow a single taxi to ply on Mumbai’s streets. Mumbai is not a dharamshala for people from Bihar and Uttar Pradesh.”

Within the ruling coalition, Ashok Chavan’s flip-flop has only turned the NCP’s Marathi pitch shriller. RR Patil, home minister; Ajit Pawar, water resources minister; and Jayant Patil, rural development minister, have all decided to make Marathi a common cause. “What is wrong in asserting laws that help provide employment to sons-of-the-soil?” asks Deputy Chief Minister Chhagan Bhujbal, “I don’t see any rationale for changing rules framed keeping in mind the welfare of locals.” What he ignores is that in a state where those citing ‘Marathi’ as their mother tongue (by the state’s latest Economic Survey) have fallen from 76.5 to 68.8 per cent of the population, just what amounts to ‘welfare of locals’ is not always clear.

There is even less clarity on what is authentic food-of-the-soil, a political issue that has led to street brawls in Mumbai. The Shiv Sena upholds the humble vada pav (a small ball stuffed with potato, fried and served in a slit bun), while the more-Marathi-than-thou Congress insists on kanda pohe (puffed rice laced with onion and fried). Potatoes, argue Congressmen, are from the north and pav is from Goa; but Maharashtra is India’s biggest onion producer and a zealous consumer of puffed rice too.

The Sena, which rules the Brihanmumbai Municipal Corporation, has refused permission for kanda pohe stalls in the city. But when the party launched Shiv Vada Pav, a food chain aimed at developing local entrepreneurship, the NCP saw in its name a belittlement of the great Maratha warrior. “It is Chhatrapati Shivaji’s name,” RR Patil protested, “How can they give it to a vada pav stall?”

In recent times, sleeves have similarly been rolled up over several other arguments along the same theme. A fracas over the appointment of a head for the Shivaji Memorial Committee, for example, took the form of a Brahmin-Maratha divide, with hardline Maratha groups trying to emphasise Shivaji’s caste. The Maratha Mahasangh and Maratha Seva Sangh objected to Babasaheb Purandare, a Brahmin known for his research on Shivaji, becoming the chief and even threatened an agitation against an alleged attempt to ‘Brahminise’ the warrior’s legacy. At the end, the Congress-led state government bowed to the demand, going so far as to delete references to Dadoji Konddeo—believed to be Shivaji’s Brahmin tutor—from junior school history text books. An award in his name was also renamed.

How much appeasement of such ‘sentiments’ is enough? Nobody knows. Even after all the measures adopted, it still takes very little to inflame Marathi anger, going by how quick MNS legislators were to manhandle the Samajwadi Party’s Abu Asim Azmi for his temerity in taking his oath as a newly elected member of the Maharashtra Assembly in Hindi (which is allowed under the statute).

Among the latest to have jumped on the Marathi bandwagon is Nitesh Rane, son of Narayan Rane, revenue minister, through his Swabhiman Sanghatana. What such groups hope to achieve is hazy, but they certainly seem keen to operate as a parallel censor board for all cultural output in the state, as directors of the Marathi films Zenda and Shikshanachya Aicha Gho discovered the hard way. Both films were cleared by the Censor Board, but had to be screened separately for a bunch of outfits that threatened a goon-enforced ban otherwise. Their writ is hard to ignore. “If they demand that we make cuts in the film, we have to do it. Otherwise we will not get the public to come to the theatres out of fear,” rues Avadhoot Gupte, director of Zenda. Why, even Karan Johar had to go apologise to Raj Thackeray at the latter’s residence for having used ‘Bombay’ instead of ‘Mumbai’ in his film Wake Up Sid.

Some of those who offend the Sena or MNS can’t even do that. After their thugs attacked a TV studio hosting Pakistani singers at a reality show, for example, the participants from across the border simply had to flee the city overnight.

The pitch diggers, it seems, are alive and kicking. They see Pakistanis on Indian cricket fields (or in TV studios) as some sort of affront to their Marathi pride. What Shivaji would have made of all this, of course, nobody has time for. Such a pity.