The oldest warhorse, the crafty red don, a damaged chief minister and the spoiler in the fray. It’s between the predictable and the historical in Kerala 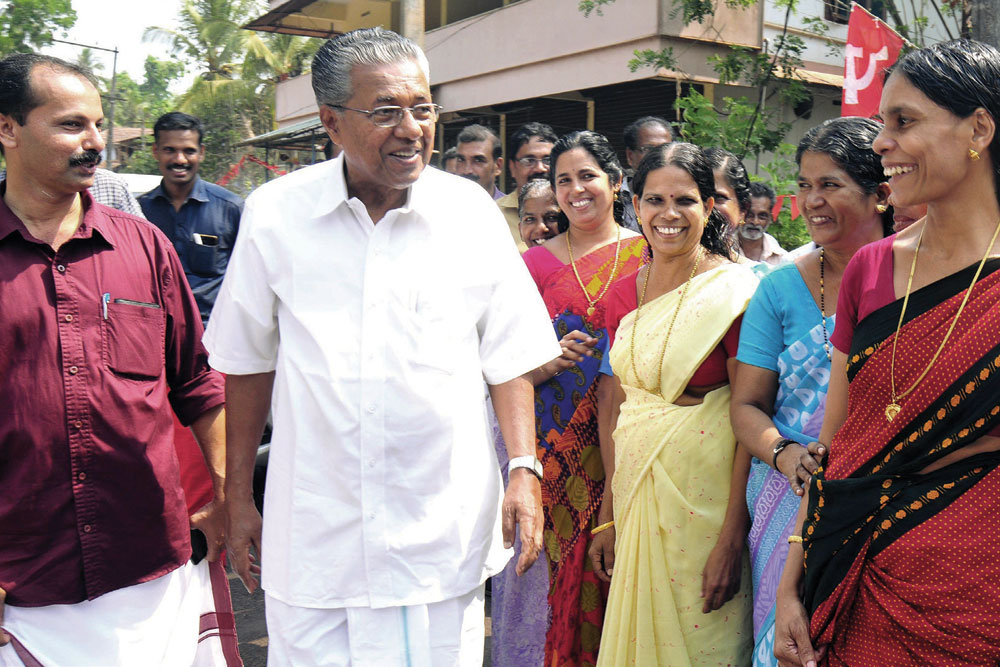 IT WAS AN emotional Fidel Castro who spoke on 19 April 2016, the final day of the Cuban Communist Party’s 7th Congress in Havana. “I will be 90 soon,” said the leader of the 1950s revolution, “Something I’d never imagined. This may be among the last times I address this room… Soon I would be like others. To all, our turn must come.” Some 16,000 km away in Kerala, Velikkakath Sankaran Achuthanandan, the grand old man of Communism in the state, shows no sign of saying farewell to politics. Aged 92, ‘VS’ is still braving the heat along the campaign trail as he makes his way through paddy fields and coconut groves in Malampuzha. A class 4 dropout who came from a working class family of Backward Caste origin and joined politics over seven decades ago, he has kept up with the times. With his own website, Facebook page, Twitter handle and mobile app, the country’s only nonagenarian in the race for a state’s top political position clearly does not want age to get in the way. His cyber-presence is not merely ornamental, as seen in the way he has engaged Chief Minister Oommen Chandy, 72, in a duel on Facebook.

The irony, however, is that VS Achuthanandan’s most significant hurdle to becoming Chief Minister for a third term is being posed by a dominant faction within his own party, the CPM, of which he is the only survivor among its original 32 founder members. Opposed to him is a group led by Pinarayi Vijayan, his 72-year- old bête noir whose supporters would rather see him as Chief Minister. Both have been fielded as MLA candidates.

Most pre-poll surveys predict an edge for the opposition CPM-led Left Democratic Front (LDF) over the ruling Congress-led United Democratic Front (UDF) in the Assembly polls due on 16 May. This would be in line with Kerala’s anti-incumbency tradition of switching between the two rival coalitions every five years. In the event of an LDF victory, the internal leadership battle promises to be fierce.

Kerala has long been known for its seesaw politics between the UDF and LDF. However, there is a new disruptor on the block in the form of the BJP

The CPM has managed to keep the factionalism masked during campaign season. This is a do-or-die election of the party, which is at its lowest ebb in national politics, and since its chances of regaining power in West Bengal appear bleak, it has to win Kerala at any cost. The Politburo’s diktat to field both VS and Vijayan, despite the state leadership’s attempt to keep the former out of the fray, is aimed at just that. Vijayan is entering electoral politics after stepping down last year as the party’s state secretary, a post he held for a record 17 years. At Tadiyanpadu village in the hilly Idukki district of Kerala, Chief Minister Chandy of the Congress addresses a large rally, waxing loud on the virtues of his government’s liquor policy by which 700 bars were closed in the past year. Suddenly, a solitary wail arises from the audience. “Saare (sir), please don’t shut down the liquor outlet in Tadiyanpadu!” The rest of the crowd roars in laughter. After a flicker of shock, a grin appears on Chandy’s face. “I understand the feelings of people like you. That is why we intend to bring about total prohibition only gradually,” he says between chuckles.

The UDF considers the policy its trump card. Under the new rules, all bars that serve Indian Made Foreign Liquor have been shut down, except those located in five-star hotels. The coalition’s election manifesto says even these would be closed if it is voted back to power, and total prohibition enforced in 10 years. Ironically, Chandy and his confidant K Babu, who holds the liquor portfolio, were opposed to the restrictions when they were first proposed in 2014 by the Kerala Pradesh Congress Committee President VM Sudheeran. They are said to have feared upsetting the state’s powerful bar lobby, even though the anxiety they expressed in public was over its impact on state revenues (given the expected annual loss of Rs 2,500 crore) and the tourism sector. But Sudheeran, a staunch prohibitionist, rolled out a campaign to ‘liberate Kerala from booze’. In a state that had earned the sobriquet, ‘Tippler’s Own Country’ for topping the country in liquor consumption, this was bound to cause a stir. Chandy cleverly changed his stance, adopting it as a morality shield of sorts, after scams began to break out one after the other involving him and his government. The ugliest of these was the ‘solar scam’ in which the prime accused, Sarita Nair, 35, once known as close to Chandy, levelled accusations of both bribery and sexual harassment against him. The liquor policy took a toll too, as a couple of UDF ministers had to quit on charges of accepting bribes from bar owners in return for some concessions. Another set of scams that has fingers pointed at UDF ministers involves the allegedly illegal transfer of large stretches of land, paddy fields, water bodies to commercial and religious entities. A 20-acre free lease granted to the liquor baron Vijay Mallya, for example, has raised a stink.

The stakes are high for Chief Minister Oommen Chandy. For the polls are not just a referendum on his government,  but on his leadership

The UDF is pinning victory hopes on the state’s women voters, who outnumber men and are expected to favour prohibition. It also expects the support of minorities, who form about 42 per cent of the state’s population. Both Muslim and Christian community leaders have endorsed the new liquor policy. The Kerala Catholic Bishops Council and various Muslim organisations have issued calls to vote for prohibitionists.

On its part, the LDF has taken an ambivalent line on the policy. While its manifesto calls for abstinence instead of prohibition, it doesn’t say whether it would reopen closed bars if voted to power. When the state CPM secretary Kodiyeri Balakrishnan said the policy might be reviewed, the LDF faced such a protest from minority leaders that the CPM General Secretary Sitaram Yechury himself had to weigh in and clarify that there was no such plan.

Chandy, who belongs to the Orthodox Syrian Christian Church, is contesting again from his native Puthuppally in Kottayam district, a seat he has been winning for four decades to score a record 10 wins. That he will be re-elected is a foregone conclusion. As usual, the CPM has fielded a lightweight against him. In case of an unlikely UDF victory, there is little doubt that Chandy would stay on as Chief Minister, although the rival faction leader Ramesh Chennithala, currently home minister, may fancy staking a claim if conditions permit. The stakes are high for Chandy. For the polls are not just a referendum on his government, but on his leadership. His personal imprint on governance has been clear, with him claiming credit for its development initiatives while owning up to its failures. Without passing the buck, Chandy has defended all the allegedly shady deals of his government.

In a meeting with the Congress High Command in Delhi in early April to finalise party candidates, Chandy had overruled Sudheeran’s suggestion to deny tickets to at least five tainted ministers as a measure to overcome the UDF’s corrupt image. The Chief Minister made it clear to Rahul Gandhi that if the politicians in question were kept out of the fray, he would opt out as well. “Don’t blame my ministers,” Chandy later quipped, “I won’t surrender my status as the one who faced the highest number of corruption charges.”

BJP’s Kummanam Rajasekharan, a political novice, has stunned his own party workers by forecasting a tally of  more than half the state’s 140 Assembly seats

Once a protégé of Congress veteran AK Antony, Chandy has never been a favourite of Sonia Gandhi, who has openly snubbed him in the past for indulging in brazen factionalism. In 2013, the High Command ignored Chandy’s objections to Sudheeran—who is considered neutral— being appointed KPCC president. Chandy, who has rarely ever bothered pleasing the Gandhis overtly, is one of the few Congress chief ministers with a mass base, and he enjoys the support of Christian churches and the Muslim League as well. He doesn’t have internal challenges to worry about either, though a defeat could put him in deep trouble.

Whether the UDF’s liquor policy is enough to counter anti-incumbency, though, is doubtful. Back in 1996, as observers point out, the UDF was ousted right after the then Chief Minister AK Antony banned arrack, a country liquor. Aware of this, the ruling coalition has taken the development tack as well, calling the LDF’s approach outdated and detrimental to the state, and claiming credit for major infrastructure projects.

Kerala has long been known for its seesaw politics between the UDF and LDF. However, there is a new disruptor on the block in the form of the BJP, whose presence in the fray is hard to miss. Though the saffron party has been hoping to see the lotus bloom—in vain—for a long while in the state, never has it been as gung-ho as it is now, thanks to a steady rise in its vote share of late. For the first time, it has a local ally in the newly formed BDJS, launched by SNDP, an outfit of the OBC Ezhava community, the state’s largest Hindu caste.

Though Kummanam Rajasekharan, 64, a political novice picked recently by the RSS as the BJP’s state president, has stunned his own party workers by forecasting a tally of more than half the state’s 140 Assembly seats, opinion polls are projecting only a couple of seats for the BJP. Its candidates appear strong in constituencies like Nemom in Thiruvananthapuram and Manjeswaram in Kasaragod, and there are at least 10 seats where the contest is between either the LDF or UDF on one side and the BJP on the other. However, more significant than its MLA count would be the BJP’s clout in altering outcomes in more than 50 marginal seats (with wins scored with less than 5,000 votes), which in a close election could determine whether the UDF or LDF gets to form Kerala’s next government. The BJP slogan of ‘Dosti in Bengal, Gusti in Kerala’ plays up the alliance that the Left and Congress have forged in the eastern state, to discredit both.

According to many observers, it is the LDF’s prospects that the BJP would harm more. For, if the BJP gets more than 15 per cent of the votes, it would blunt the force of anti-incumbency against the UDF. Also, since the Red and saffron parties are both dominated by Hindus, while Muslims and Christians are seen to lean towards the UDF, an increase in BJP votes could come at the cost of LDF support. The BDJS alliance may also injure the Left, as Ezhavas havebeen backing it for decades. Prominent among the BJP candidates are the poll- veteran O Rajagopal, 86, who is contesting from Nemom, and former Indian cricketer S Sreesanth, 33, from Trivandrum Central. The party also has film actors campaigning for it, led by Suresh Gopi, recently nominated to the Rajya Sabha.

Whoever achieves power, the challenges of governance would be daunting. The state is saddled with debt of about Rs 1.5 lakh crore. With the ongoing global recession and low oil prices, remittances from the Gulf on which many Malayalee households rely are getting squeezed. Bad times there could mean bad times here. Tourism is also in bad shape, even as farming and industrial output are stagnant.

For now, the principal adversaries are focused on just one thing: poll success.

(MG Radhakrishnan is the editor of Asianet News)