One man’s life in the Valley suggests how terror attacks have become a commercial proposition for local trouble makers looking for a quick buck. 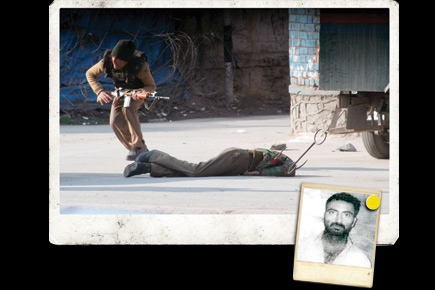 Have terror attacks become a commercial proposition for local troublemakers in the Valley? Looks likely on the evidence of this man’s life.


On 31 January, a battery of security personnel rummaged through the remains of a house in the Sopore town of north Kashmir. For over 15 hours, an encounter had been on between two men hiding in the house and the security forces—comprising soldiers from the Indian Army, Central Reserve Police Force (CRPF) and J&K Police’s Special Operations Group. As smoke billowed out of the house, some of the policemen hoped to find the remains of one most-wanted man.

As they upturned burnt quilts and blankets, they found an AK assault rifle, two hand grenades and a laptop. But there was no sign of the man or his accomplice they badly wanted dead. Basharat Saleem, the top commander of terrorist outfit Harkat-ul-Mujahideen, had managed to escape in spite of the heavy security cordon. To ease his escape, he had hurled a grenade at the security forces and set quilts and blankets afire in the house belonging to a local resident, Ali Mohammed Kema. “There were two petrol pumps in the close vicinity of the house, so our focus shifted from Basharat to dousing the fire,” says Sopore’s Superintendent of Police, Altaf Khan.

Under normal circumstances, the security forces wouldn’t have rued the loss all that much. In thousands of encounters which have taken place in the last two decades of strife in J&K, terrorists have frequently given security forces the slip. Some of them are caught or killed months later. Or, in some cases, even after years. But Basharat Saleem’s escape couldn’t have come at a worse time. Just a fortnight earlier, his men had attacked the Sopore police station twice within an hour, killing two, including a policeman. Earlier still, on 30 December, he had ambushed a group of CRPF soldiers, killing four of them.

So, the arrest or death of Basharat, who goes by the nickname of Munna and codename Danish, was vital—vital because he is an example of how militancy has ceased to be a cause and has become a commercial venture. A money-making exercise.

Police sources tell Open that the fidayeen attack on 6 January in Srinagar’s Lal Chowk area, the Valley’s first in two years, was orchestrated by Basharat Saleem. And that he took large sums of money for the operation’s execution from three different terrorist organisations. It was an outsourced job.

Actually, over the past few years, the J&K Police has effectively clamped down on militancy in Kashmir. In Srinagar city, at least, it has become difficult for terrorists to carry out a big operation, and by several indications, their handlers in Pakistan have been getting restless about this long spell of calm in the Valley.

This is where Basharat Saleem pitched in. He is believed to have spoken to three terror organisations: Lashkar-e-Toiba, Jamiat-ul-Mujahideen and his own group Harkat-ul-Mujahideen. Police sources have confirmed that Basharat took at least Rs 5 lakh from each of these outfits, promising to give them ‘credit’ for the fidayeen attack. It was because of this series of deals that, a day after the attack, all of them claimed responsibility for it in local newspapers.

Now, who is Basharat Saleem? According to police sources, Saleem’s family originally hails from the border district of Kupwara. About 20 years back, the family shifted to Sopore where Basharat’s father started a tea stall. According to the police, the family has been staunch supporters of militancy in Kashmir, and Basharat has a criminal bent of mind. That he, a computer geek, was up to no good became abundantly clear to the police a few years ago; after his marriage with a local Kashmiri girl was called off, they say he put his fiancée’s face on a few porn clips and circulated it via MMS. He was arrested under the Information Technology Act.

Earlier, Basharat had been in touch with top militants in Kashmir, including Kari Umar Inquillabi alias Mast Gul, the former chief of Harkat-ul-Mujahideen in Kashmir, who was later killed by security forces. Police sources say that the man has been responsible for many cop killings in the past. Once, acting on a specific informational input, the police laid a trap for him. He was supposed to have arrived at a particular spot in Sopore to oversee a killing. He had asked one of his men to take a laptop and some cash from a Gujjar who was arriving from a village along the Line of Control. Suspecting the Gujjar of being an Army informer, he had instructed his man to ‘bump him off’. A police party led by a senior police officer rushed to the spot.

Upon spotting the police, as their narrative goes, Basharat took out his pistol and fired at the police party. Luckily for him, the rear door of the police vehicle got jammed and the armed policemen couldn’t take aim and shoot back. But still, risking their lives, two policemen managed to nab him. Basharat was imprisoned and later released on bail.

A few months ago, Basharat’s mother Naseema was apprehended with two hand grenades and Rs 50,000 in cash. But she has been let off. “The judicial system in this state is such that you may languish in jail for stealing Rs 5, but those caught red-handed with ammunition are easily let off. That is how both Basharat and his mother escaped the dragnet of law,” complains a senior police officer.

Right now, Basharat Saleem is out there, somewhere. People talk about him. In Kashmir, he has assumed an image akin to that of Carlos the Jackal. On 5 February, he led another attack against a police party, killing one police head constable and a civilian. On 9 February, he struck again in Sopore, this time leading a group of men to attack the local police station, resulting in the death of yet another policeman.

“Sopore was once apple rich, but now it is blood rich,” sighs a senior police officer, “there is no ideology, only cash.”

“The next time I see him (Basharat),” he adds with grim determination, “he will be dead.”