Just What the Naxal Ordered

Maoists have rejoiced the most heartily on the announcement of this new state to be carved out of Andhra Pradesh, and not without reason. 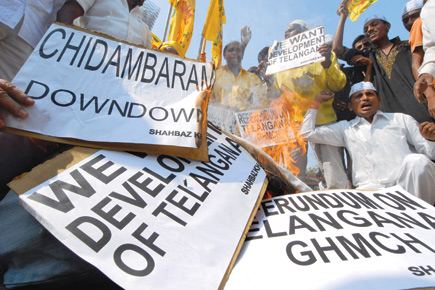 Maoists have rejoiced at the announcement of this new state to be carved out of Andhra Pradesh. Not without reason.


The formation of smaller states in the Union has been hailed as one of the success stories of Indian democracy. It has been argued that these states are better run and more responsive to the will of the people. On the evidence of Andhra being carved out of Tamil Nadu, and Haryana and Himachal from Punjab, the smaller state argument seems valid. The exceptions, though, are the recent experiments of Chhattisgarh and Jharkhand, both of which are haunted by the spectre of Naxalism and corruption. Could Telangana, to be formed by splitting Andhra, suffer a fate grievous enough to tilt the scales against the case for small states?

Take a closer look. Jharkhand, formed in November 2000, has been teetering on the brink of political uncertainty, alternating between bouts of President’s Rule and weak chief ministers unable to command majorities. It has been rocked by scandals, political corruption and Maoist bloodshed. When the state was formed, only a few districts were Naxal affected. Now, the armed insurgency has spread across the region.

No better is the record of Chhattisgarh, which came into being at the same time as Jharkhand. In its early years, it was held up as an example of better governance as compared to the moribund administration in its mother state of Madhya Pradesh. But today, that case is far more difficult to make. Here too, the last few years have seen rampant scandals, political corruption and Maoist mayhem. Today, a large part of the Bastar region is under Maoist control for all practical purposes, even as Naxal penetration deepens in other parts of the state.

Given the political uncertainty that looms large over the yet-to-be-born Telangana, fears of a repeat story cannot be dismissed. The chief of the Telangana Rashtra Samiti (TRS), K Chandrasekhara Rao, who has led the demand for the new state, is no stranger to political controversy and charges of corruption.

The role of Naxals in the recent popular upsurge for Telangana suggests a plan on their part to take the new state down the Jharkhand and Chhattisgarh path. Naxalism’s long shadow is visible on almost everything in the recent past, whether it was the decision of K Chandrasekhara Rao to fast unto death, or the students-led upsurge for Telangana that made it impossible for the Centre to ignore the turmoil. Even the subsequent debate over the fate of Hyderabad had Maoist interests in play.

The UPA Government’s okaying of a separate Telangana state is perhaps the first success of the long drawn Maoist struggle in Andhra Pradesh. The presence of Gaddar, the folk balladeer and People’s War Group member, at Osmania University in the first few days of Rao’s fast was no secret. When violence aimed at ‘outsiders’ broke out in Hyderabad, the Indian intelligence set-up had warned of Naxal involvement. In fact, a day before a protest rally in the state capital, the police arrested many Maoist sympathisers. The midnight decision left them jubilant.

The last fortnight has exposed, more than ever, the vulnerability of the TRS to the Maoist agenda. As early as 2004, it was evident that Andhra’s Naxals saw the party as a tool that could help achieve its ends, for which they were willing to offer tactical support in the political arena against the Telugu Desam Party (TDP). Two years ago, when TRS members resigned their seats in all houses of representation, kicking up a furious debate over Andhra’s division, Maoists had welcomed the move and signalled their solidarity with the TRS’s grand objective.

KCR, as K Chandrasekhara Rao is popularly called, has not been shy of reciprocation. On 29 November, just before his hunger strike, he made a startling statement at a press conference at Karimnagar. KCR drew a cause-and-effect link between the chopper-crash death of former Chief Minister YS Rajasekhar Reddy and his alleged role in the killing of several Maoist leaders and cadres in the same area despite and after having invited them for talks. “Rajasekhar Reddy invited Maoist leaders to peace talks and, later, he virtually eliminated hundreds of Maoists from the Nallamala forest,” said KCR, matter-of-factly, “He had to pay a heavy price for that.”

Such is the convergence of interests that even after the Telangana agitation forced the Centre’s commitment to its formation, Andhra’s Maoists ave preferred not to vacate centre-stage and have instead hurled themselves into the noisy tussle for Hyderabad. “Hyderabad is a part of Telangana and will stay so. There is no question of disassociating Hyderabad from Telangana,” says Maoist leader Kishenji, who grew up in Telangana, and argues that this historic city must be made the capital of the new state. For a man whose ideological bearings ought to make him neutral, this is a remarkable intervention.

The connection between Maoists’ expanding sphere of influence and the success of regional parties may not be obvious at first. But there is a clear link. By all indications, the Naxal movement wants to co-opt the TRS and the Jharkhand Mukti Morcha (JMM), the two parties with the sort of local mass appeal they need (among tribals, mainly). Sure, no leader of these parties would admit any nexus, but the influence that Maoists exert on them is becoming harder to deny.

Not just the TRS, the JMM too appears at risk of having its political agenda taken over by these infamous insurgents. A seemingly innocuous incident that occurred about a month ago at Bundu block of Ranchi district may provide a subtle hint, if not a full-fledged explanation, to the silent rumblings underneath. On 22 November, the police arrested the JMM’s Bundu block president Mohammed Irshad and his two associates, Sukhdeo Swansi and Haradhan Lohra, under the Unlawful Activity Prevention Act. The three were allegedly involved in supplying explosives to the CPI (Maoist) zonal commander Kundan Pahan, whose area of influence lies in Bundu and Tamar blocks of Ranchi district. The arrest sparked off demands for a CBI probe into the Maoist links of JMM activists and local leaders. In fact, such is the allure of a shared constituency in Jharkhand that it has fuelled the rebellion of wayward Maoists who want to cede arms for elections (at which they rather fancy their chances; see From Bullet to Ballot).

Talk to these Maoists on their rationale in opting for the JMM, and you get the feeling that they are trying to mix the politics of regional identity with that of the indigenous peoples’ struggle for social justice. These former Maoists know that only through Shibu Soren’s party can they remain organically linked with the constituency they have nurtured all through their years underground. If rebel Maoists do well in the Jharkhand Assembly polls, a strategic alliance between the two forces might find many new takers.

The scenario in Telangana is similar. The TRS has already lost most of its initiative to Andhra’s Maoists, and it’s a near certainty that no government in the new state would be able to match YSR’s resolve in containing Maoism. This is good news for the insurgency.

The Indian experience so far has been that Maoist activity in any state rises and falls in accordance with fluctuations in the political will to snuff it out. Andhra Pradesh is the best example of Maoist activity picking up whenever ruling parties adopt a soft line. Jharkhand is another example of Naxalism thriving this way.

Moreover, take a close look at the map. The contiguity of rebel-controlled Bastar forests in Chhattisgarh to three Telangana districts—Khammam, Warangal and Karimnagar—could enable them to expand their area of operations and stage a real comeback in Telangana.

In any case, smaller states are more vulnerable to Maoist expansion, especially states that are still putting their administrative apparatus in place. Political expediency that leads to the adoption of a friendly stance vis-à-vis Maoists, of course, only adds to an already volatile cocktail.

Then, there are the pent up grievances of Telangana’s tribals (again, as in Jharkhand and Chhattisgarh), many of whom have suffered abject exploitation by the relatively powerful. The gaps of governance, lack of development and a host of other state failures all create conditions that Naxalites are experts at converting into mass support for their cause.

Geographically, Telangana comprises ten land-locked districts of Andhra Pradesh with 40 per cent of its total area and 42 per cent of its population. The rest of the state is made up of the coastal and Rayalaseema regions. Of Telangana’s 40 million population, 8.9 per cent are tribals. Even to this day, many tribals live deep inside forests overseen by Naxal dalams (battalions). The people here are a captive audience swearing allegiance to Naxal leaders who are often seen as fighting for their land and water rights. With no development or funds earmarked for them ever reaching, they tend to believe Maoist propaganda of the state being the ogre, repressive and cruel, they need freedom from.

It’s a common complaint that most projects in the region benefit only coastal Andhra. If Telangana has a natural resource, it is coal, but the deposits at Singareni are said to be of poor quality.

In a recent interview to Open, the Maoist supreme commander Ganapathi had spoken about the revival of Naxalism in Andhra Pradesh. “The objective conditions in which our revolution began in Andhra Pradesh have not undergone any basic change,” he had said, adding that because of the consolidation of the CPI (Maoist) and their guerilla army, “It will take considerably less time for a resurgence of the revolutionary movement in Andhra Pradesh.”

A revival in the state has been part of the Maoist grand plan ever since 2006, when the then YSR government in Hyderabad turned the heat on them with the deployment of Greyhounds, an anti-Naxal police force. This led to an exodus of leaders into Chhattisgarh, Orissa and Maharashtra. Observers say Andhra missed an opportunity to end the Naxal menace in 2006-07 when YSR had called for talks. Nothing came of them, but police sources recall an incident in which Greyhounds who had encircled a village hosting top Naxal leaders had to let them go on the orders of a senior minister in Hyderabad. Within months, assorted Naxal groups formalised their 2004 merger to emerge as the CPI (Maoist), an all-India force which went on to trace out for itself a red corridor from Nepal to Kerala through ten states. “Now, with Telangana set to become another state, it will become a hotbed of Maoist activity,” says a senior police officer. Beware.