A deadly epidemic of encephalitis has broken out in eastern Uttar Pradesh. And the government remains clueless about its gravity 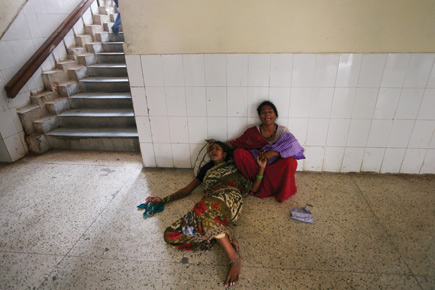 A deadly epidemic of encephalitis has broken out in eastern Uttar Pradesh. And the government remains clueless about its gravity


Dr KP Kushwaha washes his hands with a fourth of a bar of Lifebuoy soap—the kind you find in the dingy loos of roadside eateries. He has just finished his first round of Ward No 12 at the hospital of Baba Raghav Das Medical College in Gorakhpur, eastern Uttar Pradesh. “I’ve paid Rs 300 from my own pocket to buy soap bars,” he says with a tragic smile. Around him is a maze of beds, each occupied by two or even three children. Of the 151 children under treatment for encephalitis here, about 50 lie unconscious. This and another ward just above No 12 are referred to as the ‘epidemic wards’. There are no hand sanitisers here. Or disposable towels. Or shoe covers. There is just gloom, and with it hangs a heavy air of helplessness.

It is not very late in the morning, and a few medical students and nurses go from bed to bed, adjusting ventilators and drips. Children, some only a few months old, lie like rolled dice over soiled bedsheets, suffering what forces beyond their ken have dealt them. Some have been brought here from faraway areas such as interior Bihar. Some have acutely swollen livers and hearts. Some shake with fever. Others stare at the ceiling, hardly blinking.

Once in a while, a wail arises from some corner. Yet another child has died. Six-month-old Babloo died on the afternoon of 18 October. His mother nearly tore her hair out in grief. His father had no time; he had to complete the formalities. Other families looked no less shattered. Some of them looked away.

Outside the lower epidemic ward, two old guards try maintaining order in the dark corridor. It is full of poor families, who have come with this child or that, and have no resources to stay elsewhere. Some of the more resourceful families cook in a compound nearby, on small gas stoves. Since July this year, till 18 October, of the 2,500 patients admitted with encephalitis, 438 have already died, most of them children. Last year, 560 of the 3,300 admitted died here.

Since 1978, when the first case of encephalitis was reported in these parts, an estimated 50,000 people have died.

Dr Kushwaha has seen it all. In 1978, he was a medical intern in the hospital of which he now heads the paediatrics department. That year, about 500 patients were admitted here with encephalitis—brain inflammation (though it affects other organs too).

But the story really doesn’t begin there. For 27 years, the government remained in denial mode about the dreaded disease. “It is like this: the Director General of Health Services of the Union Government, and the DG of State Health Services—both with a medical background—were used to being pulled up by their superiors who happened to be bureaucrats. So for years, they said: ‘Sir, koi beemari nahin hai.’ There is no disease outbreak at all,” explains a senior doctor associated with the treatment. Okay, for 27 years, let us say there was no encephalitis. But what about 2005 onwards—the year when more than 2,000 children died of it in eastern Uttar Pradesh?

Dr Kushwaha sighs, places his stethoscope on the table, and leans back: “Where do I begin?”

The message is clear, almost etched on the walls of the medical college in Gorakhpur: the Government of India bears responsibility for every single wail that ever arose from a mother’s chest all these years. The statistics that emerge from the hospital are grim: there have been 150 encephalitis deaths for each bed. it’s a stark ratio.

So what has changed since 2005? Here is what happened: in 2005, the large number of deaths forced the then UP Chief Minister Mulayam Singh Yadav to visit the medical college. A man in a hurry, he wanted to show that he could deliver promptly. He sanctioned the building of an epidemic ward and setting up of an encephalitis research centre. Funds came in 2006, and within a year, the work was complete. Yadav had also ordered that 44 staffers be employed on a contractual basis to work with encephalitis patients. None of the posts sanctioned were for doctors, however. Nurses were to be taken on at a meagre monthly salary of Rs 5,000, and other staff at Rs 3,000. But every year, says one of them, the renewal of their contracts would get entangled in a bureaucratic jumble. Their salary was subject to the availability of funds, and even if and when funds came, says this staff member, they had no option but to bribe clerks at the ministry in Lucknow just to get their pay. Having to wait months on end just for Rs 5,000 (only one-fourth the pay of a nurse of the UP Health Services), most ran out of patience; of the 12 staff nurses employed in 2007, only one is left.

In 2008, on the recommendation of an 18-member expert committee, another 50-bed epidemic ward was sanctioned. In September 2009, a sum of Rs 5.88 crore was sanctioned under the National Rural Health Mission. With these funds, the hospital purchased emergency equipment like ventilators. It also recruited 135 staffers, including doctors, nurses, technicians and guards. But no money came the next year, and the earlier fund was exhausted this August. Of the 30 staff nurses recruited in that phase, 11 left one by one. So did almost half the doctors. This year, only Rs 63.25 lakh was released. On top of it, new posts—such as for ‘medical officers’—were created with instructions that the salary be paid to them from that sum. “Tell me, what do I tell a doctor whose designation is lecturer?” asks Dr Kushwaha. As of now, there is only enough money to pay 36 staffers. The rest have been convinced by Dr Kushwaha to continue working for a few more months since this is peak encephalitis period. Some of them have not got their salary for months now. BK Pandey, an assistant working in the minor operation theatre, has not been paid for three months. One nurse this correspondent spoke to got her last salary nine months ago.

There’s more. In May this year, work began on a central air-conditioning system for the epidemic ward. Once Rs 80 lakh had already been spent on it, the work had to be stopped midway; AC ducts had clashed with an oxygen pipeline running along the walls. A Kanpur-based company was invited to nudge the pipeline out of the way at a cost of Rs 1.5 lakh, but the company insists that a contract for a complete re-laying of the pipeline network be awarded to it (else, it is not interested).

So, throughout peak summer, children suffering from encephalitis lay under rickety fans. And even those don’t work, given the frequent power cuts. Resident doctors say the hospital faces an average of 20 power cuts a day. Of its 30 installed monitors for ventilator machines, 24 have given way due to damage caused by the erratic power supply. “I had ordered a UPS system, but that has also gone kaput since we don’t have funds to purchase new batteries for it,” says Dr Kushwaha.

In 2006, a year after the 2005 outbreak, the Central Government had imported large quantities of the SA-14-14-2 vaccine for Japanese Encephalitis from China. But only 35 per cent of all children in UP’s affected areas could be covered (in itself a miracle, though, since less than 30 per cent of the state’s children are covered by its ongoing mass immunisation programme). Even that was done badly. While the vaccination’s initial dose was duly administered, the booster to be given exactly one year later was not. As a result, cases of Japanese Encephilitis rose again in 2007.

Shots were administered once again in December 2010 to children in seven districts of the Gorakhpur and Basti region. Medical experts wonder whether the same mistake will be repeated again this year. Reassuringly, the Director General of Health Services of the UP government made a visit on 18 October and said they were considering administering booster shots in December this year.

But it is not the state government alone that is turning a blind eye to the epidemic. In 2009, the same vaccine was sent to other affected areas (Assam and Bihar), before it made its way to UP. By the time it reached, 4-5 million doses of the vaccine had expired, according to health officials.

Local doctors attribute most cases over the past 2-3 years to the water-borne enteroviral encephalitis. In the absence of proper sanitation and mass awareness of hygiene, the infection is spreading fast. On the outer limits of the Gorakhpur Municipality, opposite the medical college, lies Manbela Khas village with 3,200 votes. Though it is within municipal limits, Manbela Khas is a sanitation nightmare. On both sides of the main road leading to the village, people defecate in the open. Uncovered drains overflowing with sewage crisscross the village. Most handpumps here draw water from a depth of 20 feet.

The local councillor, the wife of a BJP Member of Parliament (MP), has never been here. A few months ago, pipes were dumped here to dig 100-foot deep handpumps (to ensure safe drinking water), but the work never began. “I must have written three dozen applications to the Municipality since Dussehra to clean the drains, but to no avail,” says Shameem Ahmed, a resident, who intends to fight the next municipal elections from this area.

Children run around barefeet, while women go about doing their household chores in the compounds of their homes, cooking food on a ground that is a few metres away from a sewage-filled drain. It is hard to believe that the last encephalitis death here occurred a year ago. But malaria is rampant. Able-bodied men complain of fever even months after they have supposedly recovered from it.

But why is there no rage about so many deaths in a state that sends the most number of MPs to the Lok Sabha? “You see, India is two people,” explains Dr RN Singh, who has been one of the key anti-encephalitis campaigners. “On one hand, you have airport people for whom the Government cares (he is referring to swine flu cases), and then, there are these people who till the land. For the Government, the latter do not matter at all.”

Dr Singh initiated a campaign under which letters written with blood were sent to the Prime Minister, Sonia Gandhi and Rahul Gandhi, among others, urging them to do something about the deaths. They got no response. Though UP’s Mayawati government has recently sanctioned Rs 18 crore to fight the menace, this does little to tide over the manpower shortages in battling the crisis.

Although the Allahabad High Court has termed encephalitis a ‘national health emergency’, apathy reigns. It is not a priority for UP Chief Minister Mayawati, busy as she is with such important matters of governance as unveiling her own statue. And then, there is a prince whose idea of making India a better place to live is to dine with Dalits.