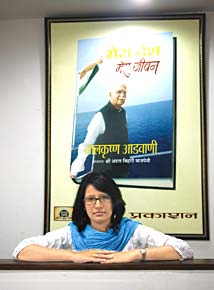 Idenitit makes for powerful postures in politics. And youth is the ideal identity to have these days, with India gurgling with new voters. An estimated 64 million citizens—nearly a tenth of the electorate—will be eligible to vote for the first time this election. It’s hard to believe, but they were just kids two decades back, when India last confronted big knuckle-to-chin questions about the character of its democracy and economy. Some had a political consciousness that didn’t go beyond fretting for pacifiers, some were content sucking their thumbs, and many hadn’t even taken birth when the country decided to open up its economy. Now, they’ve come of age. And the world too, it appears, has come of age for them. In good ways and bad.

A welcoming polity, a troubled economy, frequent bombings, fake encounters, 24/7 news channels, gee-wiz communication technology, a gripping American election and the charming new face it gave the world, and now India’s own tryst with the ballot—all these have stirred interest in all things political. And some of those who were at the threshold looking in, have stepped right in. They have walked in to do what would have brought them blank stares on college campuses just a few years ago: join politics.

These young men and women have received welcomes from political parties that can be described as warm without stifling a snigger. Parties want them. They want them to make things happen. Could it be that this is the most compelling time for Indian youth to enter politics?

For some, it springs from conviction of the need to assume control. Sarju Ganatra, a 24-year-old doctor from Ahmedabad, calls his entry into politics the beginning of “a movement”. Having attended a Young Professionals Meet held by the Gujarat Youth Congress, he now talks enthusiastically of the need for “young professionals to start looking at politics as a career option”.

According to Virender Singh Vashist, coordinator of the Youth Congress membership and internal elections in Gujurat, and secretary of NSUI, more than 500 professionals—doctors, lawyers, chartered accountants, engineers and MBA students—have joined the party in the state. “The young, educated [section of] society appreciates Rahul Gandhi,” he says, having travelled on tours in Karnataka, Delhi and Gujarat with the 38-year-old leader, “and the changes that he has brought about in the Youth Congress. Young people believe that he understands their concerns.”

There is, of course, an element of sacrifice involved. Navodaya Murali is a 29-year-old techie who changed his sartorial style to sign up. This was barely weeks ago. “On 28 February,” he says, “I walked into a room in Gandhi Bhavan full of people dressed in white. And I was the only one dressed in an orange formal shirt. When I walked out, I was a Congress member,” he says, dressed immaculately now in white. Once a technical manager at Wipro, Murali is now general secretary of the Andhra Youth Congress and administrative incharge, and a campaigner for health and education awareness. He envisions “pure and
healthy politics” with youth participation, and sees the Internet as a transformative tool. “I am a politician equipped with new generation technology,” he says, “I am in a position to understand the scenario.” Reality is what he wants the system to engage with, and he sees information as the key for “good people” to “build a good nation”.

The youth go up the learning curve faster, they say. Ranjan Chowdhury, an IIM graduate, began his political career in 2004 with the Congress, but is now on the campaign trail in Mohanlal Ganj, Lucknow, contesting his first-ever election as a BJP candidate. Aware that he must contend with money power and identity politics, both of which tend to dictate electoral outcomes, he is banking on a high youth turnout for victory. “I am 100 per cent certain… ,” he said, during an interview at the end of March. “The younger generation has been looking for someone to give them hope. They have waited long. Now they realise, why not become part of the legislature and make informed and responsible decisions that have been denied to them?”

Once dormant political aspirations are surfacing at a national level, believes Amit Thakkar, president of the BJP’s Youth Morcha. Moments like India’s Twenty:20 World Cup victory, its performance at the Olympics and the recent attack on Mumbai, he feels, have brought people together and given them a renewed sense of nationalism. “Politics has engulfed every aspect of our lives,” says Thakkar, “You are either killed by politics
or you prosper because of politics. And if we claim to be the world’s largest democracy, young people will have to make it work.”

Clearly, the aggressively persuasive media, the infinite potential of technology to gather and disperse information, and the backroom campaign strategies made famous by last year’s US presidential election have galvanised youngsters keen on doing things in new ways.

A look at the BJP’s campaign strategy centre on Tughlak Road, New Delhi, is enough to be convinced of that. Young, urban, US-returned boys and girls, the sort easier to picture offering you a slick business card with an MNC logo, sit in front of computers with duly analytic expressions. They are all highly qualified, with professional degrees, hard at work, studying and devising ways and means to influence public opinion in
their party’s favour. Pradyut Bora, who heads the operation, is an IIM graduate and the first with that tag to join active politics (in 2004). “The corporate world is limited,” he says, “In politics, on the other hand, the canvas is really vast. And whoever has come in from the corporate sector into politics has become infected with this ‘change’ virus. You have to come and experience the excitement. Where else can you get an opportunity to sit down in the morning and think about creative ways of tackling India’s problems?”

Mallika Noorani, 23, a member of this team, is on a sabbatical from a multinational bank. The educated middle-class, she says, may be apathetic and even cynical to a degree, but they are not unpatriotic. Take a look around, she urges, and you’ll see the circumstances that push people towards politics. “For example, a lot of people are having it tough finding a job. Someone might have lost a relative to a terrorist attack. Someone might think it necessary that my fellow citizens have access to clean drinking water, to healthcare
facilities. When you look around, you realise things should have been a lot better than this.”

Noorani cites the example of the US, where she studied and found how well it was looked upon to be in the political know and to be vocal. “It was considered a good thing to have political debates,” she remembers, “I couldn’t imagine that happening here. Now I can.” With this experience, her impression of politicians has changed. “I was surprised at how many people genuinely want to make a difference. I am definitely not going to walk away thinking all politicians are corrupt… there are questions we need to answer ourselves
before we write politicians off.” So there.

The rise and rise of regional parties is making politics more relevant to young people looking to get involved locally. Shams Parvez, 30, joined party politics on 15 March. He was the last students’ union president at Jamia Millia Islamia, where elections have since been banned, and is now general secretary of the youth wing of Ram Vilas Paswan’s Lok Janshakti Party in Bihar. He moved from Delhi to his hometown in West Champaran to join the regional party. “If you look at Bihar, especially Champaran,” he says, “there is not much opportunity for national political parties. I was waiting for an opportunity that would return me to the place I belonged… If I don’t work for Bihar, for bettering its education and medical infrastructure, for its electrification, what will become of the next generation?” It’s time for sacrifices, he feels, for the sake of humanity. “We must get ourselves a good education. We must involve ourselves in politics. We will not
get what we want unless we stake claim for it.”

The local appeal of regional parties and their articulation of ground realities is attracting those of a generation who have grown up in those very circumstances, done well for themselves and now feel there is much work that needs to be done.

Annamalai Kuppusamy, 24, skipped the placement season at IIM-Lucknow to do a year’s internship with a brand new party floated by Tamil superstar Vijaykanth, Desiya Murpokku Dravida Kazhagam (DMDK). He started on 4 April. “When DMDK made its foray in 2006, it had a vision,” he says, “Here was party that understood the ground realities and had a 10-year timeframe. Vijaykanth said that he wanted to be CM in 2016, not 2009. I liked that.”

As part of his project, Annamalai will study the party’s organisation and functioning in every district, and focus on ways of having it get its viewpoints across to people. “I belong to the farmer community,” he says, “I’ve grown up watching how the public distribution system works. There is no point blaming the system. During my engineering college days, my political ambitions remained dormant. But now is the time to take the risk. The IIM tag is something I can always fall back on.” The corporate sector, he hopes, will value
the experience rather than frown upon it.

Election surveys so far have shown that fewer youngsters (in the 18-25 age group) bother to vote than older citizens. But it’s a narrow gap that some effort could close, even reverse. There’s now a new attitude to politics, perhaps even a maturity that went unsuspected. As Ashok Tanwar, president of the Indian Youth Congress, points out, the new generation is quite up-to-date with what’s going on in and beyond India. “Through politics, they can make a difference, they can influence policy decisions. We are a young country
and by channelising their energies in the right direction, the 21st century can belong to India.” It’s a long-haul likelihood only the youth can possibly bet on with more realism than rhetoric.