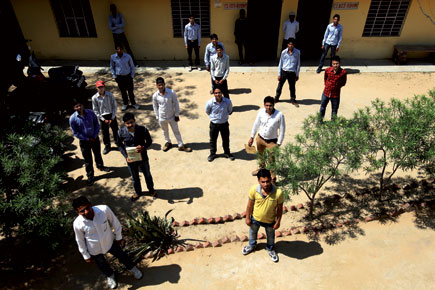 It is 12 in the afternoon, the sun almost overhead, and Sir Chhotu Ram Animal Husbandry Education Centre in Bharatpur, Rajasthan, is abuzz with diploma students going for classes. Inside, a long corridor wall is adorned with pictures of erstwhile Jat rulers such as Maharaja Surajmal of Bharatpur and Hemant Singh of Dholpur, while outside, a group of students of the Jat community have gathered. A discussion is underway on the recent Supreme Court judgment that takes Jats off the official list of Other Backward Classes (OBCs). One by one, the students stand up and talk about their problems, addressing Ramveer Singh Verma, president of the Jat Arakshan Sangharsh Samiti, and Prem Singh Kuntal, convener and also principal of the Centre.

Vikas Fauzdar, 19, had applied for the All India Pre-Medical Test under the OBC category in January this year. He has appeared for the written examination and is now awaiting his results. He wants to know whether his OBC status is still valid after the judgment. “You need to renew your OBC certificate every six months. By the time the results are out, I will need to renew mine,” says Vikas. “If I get selected under OBC quota, I need to produce my certificate. But I am afraid the authorities won’t issue a certificate now.” His father Narendra Singh Fauzdar has asked him to take all the coming entrance tests under the General Category. “I don’t know what will happen now,” he says, “So it’s better to go for General Category seats.”

Hundreds of Jat students in Bharatpur and Dholpur district face the same problem. The irony is that after the Supreme Court judgment, they have lost their OBC status for Central Government jobs but Jats from all other districts of Rajasthan still have that benefit. Until March 2014, Jats from Rajasthan (except those from Dholpur and Bharatpur) and Muslim Jats from Gujarat were part of the Central OBC list. In March 2014, a day before the Election Commission announced the schedule for the General Election, the then UPA Government, via a notification, included Jats across the country—including those from Dholpur and Bharatpur— in the OBC list for the first time. This was a big opportunity for Jat students from these two districts to aspire for Central government jobs. A number of them then obtained OBC certificates, but the Supreme Court ruling has dashed their hopes.

Arjun Singh, a 23-year-old from Chaube Ka Nangla village, had appeared for the Institute of Banking Personnel Selection entrance test under the OBC quota. He qualified for the Rural Banking Service and has been called for an interview. “I have been asked to bring all my original documents, including OBC certificate. I don’t have my OBC certificate now and since I had applied under OBC, I don’t know what will happen,” he says. “It’s like giving you food and then taking away the plate just as you start eating.”

Neeraj Kumar, a 19-year-old, has a similar tale. He appeared for the Staff Selection Commission examination as an OBC, and is worried now. “I regret applying under ‘OBC’,” he says. “Had I applied under the General category, I would still have a chance. But OBC candidates are not considered under the General Category.”

“It’s a cruel joke that has been played with the Jats of Dholpur and Bharatpur over the years,” says Prem Singh Kuntal. “There is a sense of injustice and anger among the Jats of these two districts in Rajasthan.”

Spread across nine states, Jats belong to a land-owning farming community that considers itself ‘above’ OBCs in the social hierarchy. Initially, they were against reservations based on caste. In 1989, when then Prime Minister VP Singh tried to implement the Mandal Commission report, which recommended a fixed OBC quota in all jobs in the public sector, there was a nationwide agitation against the decision. Jats took part in the agitation, opposing the Mandal regime. Vishvendra Singh, the current Maharaja of Bharatpur and an MP of the Janata Party at the time, even resigned in protest. He became a national hero for Jats for his opposition to OBC reservations. “We were always opposed to the idea of reservations based on caste,” says Vishvendra Singh, currently a Congress MLA in Rajasthan. “There are poor people among ‘upper castes’ too, and at that time I felt that reservations should be based on income rather than caste.” Along with Singh, there were around 30 MPs who were supposed to resign to pressure VP Singh into withdrawing the decision. But no one except Vishvendra Singh turned up on the day they were to resign.

Post Mandal, there was no attempt by Jats to get themselves included in the OBC list. But a decade later, in October 1999, the Government issued a notification that included the Jats of Rajasthan except those from Bharatpur and Dholpur, and Muslim Jats of Gujarat. The Ashok Gehlot government in Rajasthan too then decided to include Jats in the state OBC list. The Jats of Dholpur and Bharatpur remained excluded. The reason given by the Rajasthan State Backward Commission was that in these two districts, Jats were the erstwhile rulers and hence too well off to be considered for affirmative action. The city of Bharatpur is believed to be founded by Maharaja Surajmal, a Jat leader in the 17th century, and his successors had ruled the place till 1947 when it was merged with the Union of India. Similarly, Dholpur was a kingdom of Hindu Jat rulers founded in the 18th century. Vasundhara Raje, Chief Minister of Rajasthan, is a member of the erstwhile ruling family of Dholpur. “Being from a royal family, I may not be needing reservation, but that doesn’t hold true in case of other citizens of the district,” says Vishvendra Singh. “The Jats of Bharatpur and Dholpur, like others, are farmers, and most of them are poor and also need the benefit of reservations.”

There were protests and follow-ups by Jat leaders from the district. “It was a strange decision which surprised all of us,” says Ramveer Singh Verma. “We took this to the Chief Minister.” Finally the pressure tactics paid off, and after two- and-a-half months, Jats from these two districts were included in the state OBC list in January 2000.

But the Central OBC list still excluded Jats from Bharatpur and Dholpur. Between 2000 and 2012, a large number of Jat students from the two districts got into state government jobs, including the coveted Public Service Commission. “The difference was with Central Government jobs, where Jats from all the other districts got the benefit of reservations and our boys were mere spectators,” says Raghubir Singh, ex-chairman of Dholpur Nagar Palika. Not a single Jat student from these two districts got into the civil services in all these years, while those from other districts were making news for clearing the IAS exam as OBC candidates. “In 2011 and 2012, there were around 10 Jat boys from other districts who made it to the IAS,” says Kuntal. “Each time such news came in, local boys who studied with them got angry over this peculiar situation.”

There is a Central Ammunition Depot in Bharatpur, under the Ministry of Defence, that routinely organises recruitment tests for various posts—such as for constables. “To make matters worse, Jat boys from across the state come here and go away with jobs under the OBC category. But a local Bharatpur or Dholpur boy gets rejected many times by just a few marks in the General category,” says Verma.

Jats from the other eight states— Haryana, Delhi, Himachal Pradesh, Uttar Pradesh, Gujarat, Uttarakhand, Madhya Pradesh and Bihar—faced a similar conundrum. While they were part of state OBC lists, all of them were excluded from the Central list. “The National Commission for Backward Classes (NCBC) says that we are not socially and educationally backward. But so are other castes like Yadavs, Gujjars and others who command equal social status and power and still get the benefit of reservations,” says former Rajya Sabha MP and IPS officer Gyan Prakash Pilania. “Why this double standard approach only with Jats?”

All this resulted in a Jat agitation in March 2011, starting from Haryana and spreading to other parts of the country. At that time, Jats of Dholpur and Bharat- pur supported their caste-brethren in Haryana and actively participated in the stir. The movement was a first of its kind, with Jats blocking rail and road networks. The month-long protest resulted in an assurance from the then UPA Government that it would consider their demand.

In May that year, the UPA Government empowered the NCBC to review its earlier recommendation to not count Jats among OBCs. The NCBC started collating new data. Meanwhile, in February 2014, Rajasthan Chief Minister Vasundhara Raje wrote a letter to then Union Minister of Social Justice and Empowerment Mallikarjun Kharge, urging him to include the Jats of Dholpur and Bharatpur in the Central OBC list. ‘According to a notification issued by the Rajasthan government on 10 January 2000, Jats from all over the state are included in the OBC list. However, Jats from Dholpur and Bharatpur are being denied the benefits of reservation in Central Govern- ment jobs and educational institutions as they do not figure in the central OBC list,’ she wrote.

On 26 February, the NCBC turned down the request to include Jats in the Central list, claiming they are a ‘prosperous’ commu- nity that needs no reservations. A week later, on 2 March, the UPA Government overruled the NCBC recommendation and issued a notification to include Jats from all nine states along with two districts of Rajasthan in the Central OBC list. The Government argued that the NCBC recommendation was ‘directory’ and not ‘mandatory’ in nature.

The move was supported by several parties, including the BJP. The decision, however, was challenged in the Supreme Court. On 17 March this year, India’s apex court scrapped the previous regime’s decision, saying that ‘caste’ and ‘historical injustice’ cannot ‘blind’ a state in according ‘Backward’ status to people.

“It’s unfortunate that the Supreme Court has decided against Jats of two districts of Rajasthan and other states,” says Vishvendra Singh. However, the current Modi Government has moved a review petition on the court order. “We met Prime Minister Modi on 26 March and appealed him to look into the matter,” says Verma. “He has assured us of all possible help.” If the review petition is rejected by the Supreme Court (it would be taken up by the same bench), they want to file a curative petition that would require the formation of a new bench.

Jats command great political clout in the country, with a population of around 85 million, and play a crucial role in the electoral politics of over 30 Lok Sabha seats (in nine states). This includes six seats from Rajasthan, Bharatpur and Karauli-Dholpur included. No national political party can ignore their demand without the risk of facing a backlash at the polls. The Modi Government will therefore try its best to restore their OBC status. But until then, the boys from Dholpur and Bharatpur will keep wondering whether they are OBCs or not.