Can the enshrinement of English as a goddess help Dalits overcome their hardships? Good question. 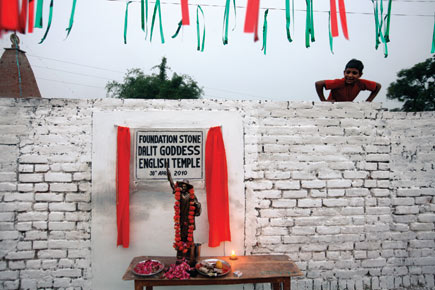 Can the enshrinement of English as a goddess help Dalits overcome their hardships? Good question.


Rule of Peshwa is gone / Mother English has come. / In such a dismal time of ours/ Come Mother English, this is your hour. / It is all for the good of the poor / Manu’s dead at English Mother’s door. / Knowledge is poor man’s refuge and shade / It’s akin to comfort mother-made. —from Mother English, Savitribai Phule, 1854

On 30 April, Bankagaon in Lakhimpuri Khiri district, Uttar Pradesh, witnessed a shilanyas (foundation laying) that was radically different from the one witnessed in Ayodhya in 1989. The Nalanda Public School, a modest private initiative in the village, played host to a ceremony where the foundation for the first ever temple to ‘Dalit Goddess English’ was laid. The Chief Priest was a suit-clad Chandra Bhan Prasad, who describes himself as a ‘self-trained anthropologist and social psychologist’; and the mantra chanted was ‘A-B-C-D…’

After a few crisp speeches—in Hindi—emphasising the need for English among Dalits and other oppressed groups, a 30-inch bronze idol was installed, and a song composed by teachers of Nalanda soared over the din made by a noisy generator (electricity is scarce in UP): London sey chalkar aayi, yeh Angrezi Devi Maiyya/ Computer-wali Maiyya, hai Angrezi Devi Maiyya/ Hum sabki devi maiyya, jan-jan ki Devi Maiyya … (She hails from London, this Goddess English/ She reigns over computers, she’s everybody’s goddess).

Dalit Goddess English (DGE), sculpted by artist Shanti Swaroop Baudh, is modelled on the Statue of Liberty, with a pen in her raised right hand, books in her left. She sports a floppy hat and is perched atop a computer. Compared with heavy-bosomed Hindu goddesses, DGE has almost no sign of breasts.

The genesis of this new goddess lay in an unlikely birthday party for Thomas Babington Macaulay on 25 October 2004 hosted in Delhi by Prasad, author of Dalit-Phobhia: Why Do They Hate Us? Macaulay, villain of the nationalist movement who both the RSS and Left love to hate, was first crowned an icon by Prasad and his friends in 2000 when they issued a list of ‘Dalit Icons of the Millennium’. Macaulay got to rub shoulders with Ambedkar, Phule and Vasco da Gama. Many self-sure radicals, liberals and secularists were aghast.

To understand this, and in order to not dismiss Prasad’s gesture as performative excess with a subtext of hyperbole and comic irony, one must unlearn Brahmanic versions of history that pass as ‘nationalist’, and see why Dalits and Shudras (OBCs) did not historically have an adversarial approach to British presence or the values embedded in their modernity project.

Three years before Mangal Pandey triggered off a mostly upper caste mutiny against the East India Company’s forces, more for offence caused to caste and religious purity at the prospect of sinking one’s teeth into a bullet greased with cow’s and pig’s fat, Savitribai Phule (1831–1897) wrote a poem called ‘Mother English’. She was lucky to be married to Jyotirao Phule (1827–1890), the Aristotle of Shudras and Atishudras, a neglected radical thinker who offered a spirited critique of Brahmanic nationalism’s rather convenient anti-British posturing. Unlike reformers of his time, Phule, despite an enforced child marriage to nine-year-old Savitri, educated his wife, opened schools and wells for Dalits, adopted an abandoned child of a Brahmin child widow, started an orphanage for similar Brahmin orphans, and made his wife a teacher at a school for Dalit girls. Savitribai was an equal partner in Phule’s Satyashodak Samaj when she wrote her poem.

Phule, who was exposed to English education and was inspired by Thomas Paine’s Rights of Man, thought it more useful to engage the British in dialogue on issues of justice and equality than Dwijas (‘twice borns’) who believed in their natural superiority and an innate lowliness of Dalits. Phule saw the relationship between Dwijas and Shudra-Atishudras as one between the coloniser and colonised, and felt the enslavement of Shudras was worse than ‘negro slavery’.

Meanwhile, in the Madras Presidency, where The Hindu was founded in 1878 to defend the right of ‘natives’ to be appointed as judges, Dalit-run newspapers took a contrarian view. Tamilan, edited by Panditar Iyothee Thass, in a 1908 news item titled ‘Power of District Magistrate for Indians’, argued that such positions should not be given to Brahmins: ‘If we give the power of District Magistrate to these people, they will employ the people of their caste and cheat common Hindus. Those who call themselves ‘higher caste’… regard even the British as inferior to them. They don’t have intellectual, physical, economic or even numerical strength. They have only the strength that comes from calling themselves people of high caste.’

In this tradition, Periyar EV Ramaswamy in the South (who mourned 15 August 1947 as a ‘dark day’ that Brahmin-Bania forces wrested power) and BR Ambedkar, too, preferred to negotiate with the British than seek their outright ouster. On the question of English, in 1953, addressing students of a college he founded in Aurangabad, Ambedkar said: “I do not believe any other language in India, including Hindi, can be used instead of English in schools and colleges.”

It is this legacy that Chandra Bhan Prasad draws upon and unleashes a contrapuntal symbolic challenge to Mayawati’s statue obsession. After two years of commemorating Macaulay’s birthday at his residence in Delhi, in 2006 Prasad decided to bestow DGE with a form. First, a colour poster was unveiled. On 25 October 2009, the bronze statue emerged at a party in India International Centre, the intellectual hub of the capital. “Once you sculpt a figure of a goddess, you need a temple for her,” says Prasad, explaining what led him to the shilanyas. “Even when they say they are not Hindus, the religious practices of Dalits overlap a lot with popular Hinduism. Even where Dalits converted to Buddhism, it’s mostly the men who visit the Buddha Vihara and contemplate an abstract religion devoid of ritual. The womenfolk easily seek comfort in popular goddesses. They need birth or marriage rituals. Besides, in a family, it is important to convince the mother of the empowerment that English will ensure her children. This is best conveyed once English becomes a Dalit goddess.”

In Bankagaon, there are no government schools that offer education up to Class 12 in a 10-km radius. A few boys do manage to trudge the extra mile, but girls are not sent, especially not Dalit girls. The Nalanda School came up as a private initiative of Amar Chand Jauhar, who charges Rs 550 annual fees and provides schooling up to ‘inter’. Says Shiva Shankar Lal Nigam, principal of Nalanada, “We are supposed to teach English here from Class 6. But few of us know how to even speak it. I have an MA in English from MJP Rohilkhand University in Bareilly, but cannot speak even a sentence in English.” In such a setting, won’t practical English teaching do a better job than a temple for DGE on a budget of Rs 5 lakh?

“An event like this attended by a thousand villagers will create a buzz in and around the village. I am an atheist who has had to concoct a secular Devi out of English so that people get animated by the pursuit of English. By next year, we’ll also ensure that special English teachers are recruited by the school. The point is to first get Dalits to aspire to English,” says Prasad, sipping Teacher’s Scotch over tandoori chicken in Shahjahanpur later that night. The local invitation for the Bankagaon event, a Hindi leaflet distributed through the village, serves an ominous warning: ‘In 20 years from now, without English you won’t find employment even as a chaprasi or a driver… the temple for Dalit Goddess, English, will help inspire you to learn English.’

In its sixth year now, the English project has hit the dusty road, moving on from the shock-and-awe administered in Delhi, where Prasad gleefully extends an annual invite to “gym-goers, organic-food eaters, late-night daters, cattle-class enthusiasts, also fatalists, naysayers and Luddites.” (Naysayers are apparently those who give their dogs English names, speak to them in English, and yet want Dalits to preserve local bhashas.) At his Macaulay parties, guests ranging from political psychologist Ashis Nandy, social historian Gail Omvedt, and the British High Commissioner, to the president of the Dalit Indian Chamber of Commerce and Industry are asked to chew on the full text of Macaulay’s infamous 1835 ‘minute’, and DGE posters are sampled with mutton, chicken, fish and good booze. Nandy is a regular; though vehemently opposed to Prasad’s views, he says he is taken in by the very audacity of the idea.

Prasad argues that few people have read more than a couple of oft-cited lines from the minute: ‘A single shelf of a good European library is worth the whole native literature of India and Arabia’, or ‘We must at present do our best to form a class who may be interpreters between us and the millions whom we govern; a class of persons, Indian in blood and colour, but English in taste, in opinions, in morals, and in intellect.’ These lines, Prasad says, have been repeatedly quoted out of context to demonise Macaulay, who was actually waging a battle with Orientalists who indulged the teaching of Sanskrit and Arabic—elite languages to which the oppressed had no access. Once you resist balking at Macaulay’s shocking belief in the ‘intrinsic superiority of Western literature’, a reading of the minute makes it clear that Macaulay was also fighting maulvis and pandits and sought to curb the Company’s spending on Sanskrit colleges and madrassas: ‘What we spend on the Arabic and Sanscrit colleges is not merely a dead loss to the cause of truth; it is bounty-money paid to raise up champions of error.’

Prasad’s lament is that while Marxists, themselves ‘Macaulay’s children’, portray the British Lord (who also oversaw the Indian Penal Code) as an enslaver who sought to replace all native languages with English, they don’t tell you that he also argued: ‘The worst of all systems was surely that of having a mild code for the Brahmins, who sprang from the head of the Creator, while there was a severe code for the Sudras, who sprang from his feet. India has suffered enough already from the distinction of castes.’

Marcus Wood, Professor of English at University of Sussex and author of three books on slavery who witnessed the Bankagaon event, is not too convinced: “The Prasadian construction of Macaulay as an advocate for the democratisation of English as a revolutionary agent for social levelling in India came as a massive shock to me.”

What seems to have missed Prasad is that the English that is sought and taught today—an instrumental American Business English, a tool of capitalism—is not the English that Macaulay, with his fondness for Milton, espoused in the 19th century. Wood thinks the way the link with the British Empire is prioritised in the DGE movement may not only be dangerous, but dubious; however, “The sheer energy generated around this phenomenon on the ground, in that Dalit village, gave me pause for irrational thought.”

In Bankagaon, a DGE temple will come up by 25 October. But just as my sceptical mind tells me the worship of Lakshmi does not yield wealth, mere worship of English Maiyya won’t make one speak the language; nor will it make up for the exclusion of Dalits from elite centres of learning.

Anand is a Delhi-based publisher of Navayana