Is it a Wave or a Whirl?

In the hinterland of Haryana, it’s a mix of caste and cult 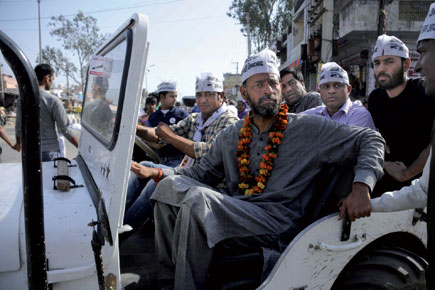 In the hinterland of Haryana, it’s a mix of caste and cult

From the aperture in the gate, a man says entry to Rampura House is forbidden. Outside, a few men are waiting for an audience with Rao Ajit Singh, son of the late Rao Birender Singh who is from the family of Rao Tula Ram. He was an Indian National Lok Dal member, but quit the party last week. A bit of the palace can be seen: the columns rise above the trees. They say it is spread over 32 acres. Former Prime Minister Indira Gandhi is said to have stayed here. Rao Birender Singh bailed her out during the Emergency, they say. There is the raja and the praja (subjects). That’s how Haryana unfolds: dynastic, and almost impregnable.

No flags flutter on the roof of Rampura House. It remains steeped in history, and its glory. Next to it, there is Bhagwat Bhakti Ashram built on 40 acres where Dalits and widows stay. There are other such things, gifts from kings. History comes in bits and pieces in random conversations.

Beyond the glass and steel of Gurgaon city on the edge of the national capital, a rural landscape unfolds. There are palaces of erstwhile rulers and primordial systems. On the road, narratives change depending on where you are, and among whom.

Further down the road, there is a farmhouse that bears the leader’s name. Here, the saffron and lotus are hard to miss. Some men are sitting on chairs, smoking a hookah. A brick building, by no means small in size, has a banner of the Haryana Insaf Manch with his photo and his daughter’s—Aarti Rao, a party member. The family lives in Gurgaon and Delhi. They say he doesn’t come here often. But he looks after his subjects.

“There is a Modi wave,” says Abhay Singh, the former sarpanch of a cluster of villages in Rewari.

“Here, it is about the personality. We trust Rao Inderjit Singh. He is Ahir. We are Ahirs. This is Ahir land,” Subbey Singh, a local, intervenes to say.

They dismiss Yogendra Yadav of the AAP, saying he is a professor; he should leave politics to stalwarts.

Politics in Haryana is a strange mix of old loyalties, caste affiliation, and allegiances. All inheritances of a sort. The three Lals of Haryana politics—Devi Lal, Bansi Lal and Bhajan Lal—are long gone, but their families are pitched in battle against one another. Once again.

This, then becomes a challenge for the Aam Aadmi Party that announced its entry to Haryana politics with a rally in Rohtak. They sought the participation of khap panchayats, but were refused. Development matters, but only so much. Ambition, aspiration are misplaced in the context of the state. Poverty is not a pressing concern. Inflation is. But only if you are desperate for an explanation for shifts in loyalties.

Beyond the Jindal and Accenture buildings, and everything else that shimmers in this oasis, lies Mewat. About 35 km from the city that is home to professionals—those who speak about corruption and clean politics, and change. This is where AAP could matter.

But Mewat is like a wasteland. Speeches and promises adjust themselves to the context. Yogendra Yadav speaks about development in Mewat, and in Gurgaon, about corruption and taxes.

On 20 March, the INLD’s Chaudhary Zakir Hussain filed his nomination to contest Gurgaon’s Lok Sabha seat. There is a rally in Nangli village in Nuh. On dusty roads, jeeps wrapped in INLD flags surge forward. The settlements that are submerged in darkness come to life when the headlights of cars, and jeeps, fall on them. Men and women and children line the streets, hailing their first Muslim candidate from the region since 1989.

“Kisi ko to rahbar banana parta hai (One has to find a guide),” a woman says, and smiles.“I am a Meo Muslim from Mewat, and this election, I will matter,” says the woman, who refuses to give her name.

Om Prakash Chautala’s government built the 40-km-long Benarasi canal in 2004, but the canal has seen water only once in 2005. It is an arid landscape, unlike the lush fields of Rewari. For years, the Congress denied a ticket to a Muslim candidate, they say in Firozpur Namak village.

The last time, Muslims had voted for Rao Inderjit Singh. But they feel betrayed; Mewat remains a desolate landscape. “We will change parties, do whatever we can to get representation. We are in majority here. We need a ticket,” says Farooq Ahmed, 33, a school teacher.

Nuh, Punhana and Ferozepur Jhirka have about 458,000 voters, of which Muslims account roughly for 350,000 voters. Mewat has a literacy rate of 54 per cent, compared to the state average of 75.5 per cent as per the 2011 Census. There are no good schools, says Ahmed. They have to buy water. It is a living hell.

There are rumours that the INLD will align with the BJP. But for now, Kuldeep Bishnoi, son of Bhajan Lal and leader of the Haryana Janhit Congress (HJC), is its alliance partner. The BJP has announced that it will fight eight seats, leaving the rest to the HJC.

At dusk, two men are smoking hookah in an old house in Umra, one of the seven villages of the Saatvas Khap in Hisar district. Kartar Sarpanch, Umra’s pradhan (head), is a reluctant speaker. Ram Mehar, the former panch, is more forthcoming.

“Modi is trying. But it is a party of traders. We are farmers—and Jats. Hindutva ideology also doesn’t matter here. The BJP doesn’t exist here. Nor does the AAP. Here, it is between the two Jat leaders— Hooda and Chautala,” he says. Previously, they had supported the Congress, but anti-incumbency is strong.

“They have done a lot for us. But ten years is enough time. Change is automatic,” says Kartar Sarpanch. “Dushyant Chautala, Om Prakash Chautala’s grandson and Devi Lal’s great-grandson, is the INLD candidate. We will go with him.”

He is only 27. Against him is the HJC’s Kuldeep Bishnoi, a non-Jat.

As a khap panchayat, he says, they will shake up things a little bit. “We will wipe out the Congress,” he says. “When Chautala started making a lot of money, we got rid of him.”

It doesn’t matter to them that the Chautalas are in prison. In fact, says Sarpanch, the Lok Sabha election will be like a semi-final. The battle for the state is due in October. Chautala has been wronged. At 78, they put him behind bars.

Not very far from Hisar, in a village called Khera in Siwani district, which is also Arvind Kejriwal’s native village, a crowd of people is waiting for him.

In fact, only if you ask about the AAP and BJP, do they talk about Modi or Kejriwal. They say ‘Modi is a good man’. They also say, ‘Kejriwal is an honest man.’

In Rohtak, there is a Congress rally. Bhupinder Singh Hooda asks the electorate to give his son a third chance. Deepender Singh Hooda is sick. The doctors, he says, told him to stay home.

“I gave him to you. You decide,” he shouts from the stage. “Deepender is your son. Don’t look back. Who will fight his battle?”

There is a reference to those who wear the party green. He is referring to Chautala’s INLD. “Don’t trust them. Look at the development,” he says. Haryana goes to polls on 10 April for its 10 Lok Sabha seats, and then in October for the Assembly election.

When Deepender Hooda takes over, his voice is feeble.

“Ram ji, Ram ji,” he says. “Let’s make the faisla (decision). Eight-and-a-half years ago, you gave me Rohtak. I did my best. BJP has written in its manifesto that Modi will get IIM, IIT, and AIIMS in all cities. BJP has learnt from Rohtak. We have all three here,” he says.

Only if they promise their support will he file his nomination, he says. “I can’t go everywhere because I am unwell. I want to ask you: wasn’t I there for you? Lete, lete ji nahin lagta hai mera. Tumhara lagta hai kya (I don’t feel like myself lying down. Do you?)?” he asks.

On 21 March, he filed his nomination late in the afternoon. The Congress is restless. It has suffered a debacle in Delhi. The AAP is contesting all seats in Haryana, and the BJP has allied with the HJC. Both father and son charge against the Gujarat development model of Modi, and say Haryana is way ahead. Consider old-age pension: Haryana gives Rs 1,000 against Gujarat’s Rs 400.

At Maharishi Dayanand University in Rohtak, a few students sit under a gazebo, drinking tea. Ankit Hooda, a 22-year- old student from Ambala, says the Congress government did a lot of work in Rohtak. It built this university and an auditorium here. It could have done more. There’s that anti-incumbency sentiment again.

“AAP belongs nowhere. Why did they quit the stage in Delhi? See, Chautala will develop his area, and Hooda will do work in his. We have to vote, else we will slip into anarchy. We don’t have an urbanisation problem,” he says. “AAP’s rhetoric doesn’t matter here. Even the Congress’ NREGA and other things won’t swing votes to much extent.”

He adds, however, that they will respect the decision of their elders.

At the home of 97-year-old Colonel Risal Singh, leader of the Sangwan Khap, things begin to make some sense. Since 1973, Singh has been the pradhan of this khap panchayat that has under its control almost 61 villages in Charkhi Dadri, and around 20 in Sonepat, and a few more in UP and Rajasthan. It is one of the biggest khaps in Haryana.

“We have a social role. We don’t tell anyone to vote for a particular party. But political parties always seek our support. Vote is independent,” says Singh in English.

The grandson serves tea. His wife watches from the threshold, through a veil.

“I haven’t seen a Modi wave here. Chautala was one of us. He would smoke hookah with us. He removed taxes on tobacco farming. The old-age pension Hooda talks about, Chautala started it in 1987. Haryana is 90 per cent rural. Khaps are misunderstood by the English press. We built a girl’s college in Jhojhu. We are not a murderous bunch,” he says.

Although Dalit and Brahmin and other such khaps exist, the Sarvajat Khap is binding on all, he says.

Last week, Singh called a meeting and expressed his dissatisfaction over Pradeep Sangwan being denied a BJP ticket from Sonepat. “He is our brother. Kishan Singh Sangwan, his father, was an MP from Sonepat. We will throw our weight behind him,” he smiles. Meanwhile, Pradeep Sangwan has met Hooda and rumours say that he might join the Congress. Yet another defection.

There was a time when the khaps had got together. Back in those days, they had rallied behind the late Major Amir Singh Sangwan from Jhojhu Kalan who had represented the area in the joint Punjab- Haryana Assembly, he says.

“Congress had not given him a ticket then. We made him win,” he says. “In the end, it is about the idea of brotherhood.”

Gurgaon, the city, offers a break from the Lals, and dynasties, and caste affiliations, and complex ticket calculations. There is also old Gurgaon. Much like Delhi’s urban villages with buildings jostling for space, and wires hanging overhead. A mall is being built. The urbanscape is expanding, taking over bit by bit. Beyond, there is the shining city.

In its bars, and cafes, stories of dynasties are rubbished by the young, and the impatient, and the erudite.

“Bizarre,” the elite say, looking out of their glass towers.