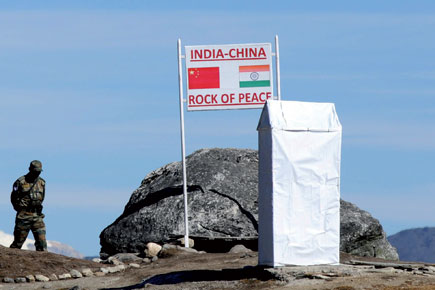 
For some, India’s relations with China remain frozen in defeat. All the water that has flown down the Yarlung Zangbo-Brahmaputra river system since 1962 hasn’t levelled the jagged edge of loss that large parts of India’s military and civilian elite felt after being routed on the battlefield.

Though this 1962 generation is passing on, it would appear that their legacy has transferred to a minority, vociferous on Indian television and in newspapers, that wants us to repeat the errors that Jawaharlal Nehru and team made in dealing recklessly with China in the 1950s. This right-wing element, which otherwise extols the virtues of India as a great nation, seems to believe that the country’s strength is frozen at its 1962 level. Whatever the quality of our political leadership, India is a self-confident nation whose people are its strength, a strength that comes with plurality.

In comparison with 1962, the Indian economy is vibrant and its integration with global knowledge systems in the form of human capital working at the cutting edge of technology and science is apparent even to a casual observer.

The same element that wants to ‘nuke’ Pakistan for the beheading of an Indian soldier (forgetting conveniently that the other side too has the ability to ‘nuke’ India) wants Indian forces to march into perceived Chinese territory or open fire at Chinese soldiers currently camping on Indian territory in Daulat Beg Oldi in Ladakh. It conveniently forgets that India has a military budget of nearly $50 billion, has the world’s second largest standing army after China, and is the seventh largest arms buyer. India will be the fourth largest global arms buyer by 2020, The Economist has projected.

India is no pushover.

You could also miss that India-China trade stands at $76 billion, the two countries are part of BRICS, their leaders meet often, and Indian and Chinese soldiers have not exchanged fire since 1967. You could also miss the fact that when ordinary Indians and Chinese meet, and not just babus and generals, the baggage of history is hardly central to their conversation. If you visit China, people are both curious of and friendly towards Indians.

But, then, all this must not come in the way of the story.

China is the ‘enemy’ and we must do all within our power to counter it. Even if it means squandering our economic gains by contemplating conflict between countries that are a billion plus in terms of population.

Though the froth-at-the-mouth school of diplomacy would have us believe that war is the only option, Prime Minister Manmohan Singh and his government have taken the cool route, trying to downplay the 15 April Chinese entry into territory traditionally controlled by India while using dialogue as a means to resolve the issue.

India’s Government has rightly resisted the temptation to cancel a preparatory visit by External Affairs Minister Salman Khurshid to Beijing ahead of Chinese Premier Li Keqiang’s visit to India on 20 May.

With the BJP taking the lead, as usual, in condemning the Union Government’s allegedly weak-kneed response, its spokesman Ravi Shankar Prasad has gone to the extent of saying that the murderous attack on Indian prisoner Sarabjit Singh in a Lahore jail was a Pakistani “ploy” to deflect attention from the Chinese incursion.

But let’s not get distracted.

The India-China boundary dispute is possibly the largest still-to-be-resolved land border dispute in the world where the two sides don’t agree on any ceasefire lines, making encounters between soldiers inevitable. Since 1988, when Rajiv Gandhi visited China, becoming the first Prime Minister since Nehru in 1954 to do so, both countries have demonstrated some political will to put in place agreements to manage their border dispute.

In 1993, the two countries signed what sounds like a mouthful of an agreement: the Agreement on the Maintenance of Peace and Tranquillity along the Line of Actual Control (LAC) in the India-China Border Area.

The commitments are clear-cut. No over-stepping for either side while the two determine the line of actual control (LAC). A set of confidence-building measures to see the agreement through are also in place.

The Joint Working Group on the boundary, set up to clarify the LAC in 1988, did some work but failed to make progress in the contentious eastern and western sectors. Given the slow progress on LAC clarification, India and China set up a Special Representatives mechanism during the June 2003 visit of Prime Minister Atal Bihari Vajpayee to Beijing in an effort to speed up work on a possible resolution of the dispute.

After a promising start, this mechanism has also failed to deliver a clarification of the LAC, considered the key to an overall settlement of the boundary dispute. No trade-off or compromise solution seems in sight.

In fact, after being tasked to talk only about the border, this mechanism is also discussing other issues, an indication that they haven’t been able to make much headway on the main agenda item—a boundary settlement.

As the dispute festers, let’s accept that China is making aggressive moves. But what of India? What has it been doing along the boundary?

This is what China expert Srikanth Kondapalli said in a piece for Rediff.com about what India has been up to: ‘At the conventional military level, to counter any Chinese push, a series of measures were undertaken by the Indian armed forces—including the recent announcement of a Strike Corps, three new air bases in the Eastern Sector, plan to construct strategic roads connecting border areas, procuring new equipment, revamping the advanced landing grounds, etc.’

So, could the recent Chinese actions possibly be a response to what India has been doing? After all, journalists have restricted access to the disputed boundary and must therefore depend on official accounts—Indian and Chinese—before forming an opinion.

Equally, while Indian leaders and officials make professions of friendship to their Chinese counterparts at a formal level of interaction, private conversations would reveal that suspicion levels on China’s real intentions remain high. All this is no longer in the domain of speculation. A December 2009 US cable, published by WikiLeaks, reports Prime Minister Manmohan Singh as telling US Secretary of State Hillary Clinton: ‘India too wants to see the peaceful rise of China, Singh said. He noted that they had been engaged for the past five years through special representatives to discuss border issues. Both sides agreed to maintain peace and tranquillity, but Singh noted India was bothered by the recent ‘assertiveness’ of China.’

More such evidence is available. According to a US cable of October 2009, made public by WikiLeaks, India’s Foreign Secretary Nirupama Rao told an American official that ‘…China’s ‘edgy nationalism’, increased assertiveness on its disputed borders, and interventionism beyond the Tibetan plateau into Nepal, Pakistan and beyond represented a ‘game changing’ strategic challenge for India… Rao described India as eager to strengthen partnerships with Japan and South Korea to counterbalance China, and noted India’s strong interest in East Asian Summit participation.’

It is evident that since India’s 1998 nuclear tests, New Delhi has edged closer to the US in trying to come to terms with China’s growing clout in the region. Chinese assertiveness in the South China Sea and in relations with smaller Southeast Asian nations has probably set alarm bells ringing in South Block.

But this Chinese assertiveness is not new, a fact that is underlined by the content of the WikiLeaks cables quoting Manmohan Singh and Nirupama Rao. It’s also unclear how far the Chinese will go in risking conflict with India.

China would have also seen the growing intimacy of ties between India and the United States. Speaking in the US this February, Foreign Secretary Ranjan Mathai was all warmth for America and its policies. Arguing that a “strong, prosperous, innovative, globally engaged, United States is fundamentally in India’s interest”, Mathai said India shared the “conception that the spread of democracy, open societies, and rule-based multilateral frameworks, will shape a better world order”. Added Foreign Secretary Mathai: “I think I should address a misconception that has secured the force of conviction through multiple reiterations. India does not harbour misgivings over your re-engaging—or rebalancing, or indeed, pivoting—towards Asia.”

Such warm words of welcome for America’s controversial ‘pivot’ towards Asia shows how far India has come in its uncritical support of Washington DC’s policies at a time when its international clout is waning. The ‘pivot’ is all about trying to box in China, ensuring that it plays by American rules as its economic influence increases and its power begins to match that of the US.

Seen together, these statements do show Indian fears of China and a perceived need to work with the US to contain its power and influence.

All told, India has little information on how the Chinese establishment thinks, what its long-term strategic calculations are. You can count all Indian correspondents in China on the fingers of a single hand, and all our noisy TV channels put together don’t have a single representative in the country they love to bash.

One thing, however, is clear. In 2003, when I travelled with Vajpayee to Beijing, India made a direct trade-off: our formulation that Tibet was part of China was in lieu of China’s recognition of Sikkim as an Indian state. The link between Tibet’s status and improvement in bilateral relations with India was evident.

To my mind, the presence of the Dalai Lama, and a Tibetan ‘government-in-exile’ operating with his nod on Indian soil, remains a red rag to the Chinese. (Chew on this: how do you think belligerent TV pundits would respond if a Kashmiri separatist leader set up a government-in-exile in China?) The Dalai Lama’s presence is a reminder to the Chinese that their nationalism remains incomplete.

I have no problems with an independent Tibet; Tibetans are a nation in every sense. But they must get their independence themselves. India cannot do it for them. The presence of the Dalai Lama is an impediment to an overall border settlement with China as also a general improvement in relations.

The Dalai Lama’s return to China with dignity as part of a settlement with China remains the best way to improve bilateral relations. But that doesn’t look as if it’s going to happen anytime soon.

In the nearly 25 years since the Rajiv Gandhi visit, the two countries have managed their border problems reasonably well even as mutual trade booms and exchanges multiply. But they are no closer to a final settlement. From what little we know of border talks, the spirit of compromise is not on the table. What looms large, instead, is the fear of losing territory and having to explain this to their respective peoples. Redoubled negotiations, backed by steely political will, are the only sensible option for both countries. Like India, China must reject the idea of conflict. The cost of conflict is too abhorrent even for a moment’s contemplation.

Amit Baruah is an independent, Delhi-based journalist and former South Asia Editor of the BBC. He tweets at @abaruah64