New Delhi shrank on the world stage as he looked on 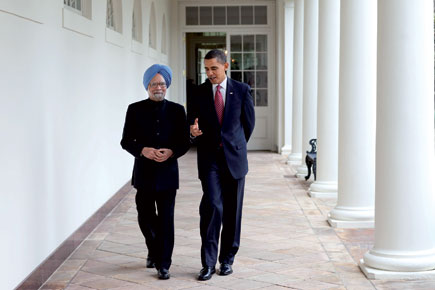 New Delhi shrank on the world stage as he looked on

As Manmohan Singh demits office, many will be wondering if he could be any less active in retirement than he was in the ten years he resided at 7 Race Course Road! Going down in history as India’s first non-Prime Minister is opprobrium he sadly deserves, considering that his record is of such little distinction that the 2008 civilian nuclear deal with the United States—an unfolding disaster of epic proportions—is held up as its high point.

The fault is Sonia Gandhi’s for putting at the helm of affairs a consummate apparatchik (‘technocrat’ would be too grand and flattering an appellation) who pulled time at the World Bank, and later, after a stint as professor at Delhi School of Economics, in various capacities in the Government of India. Alas, the very attributes—political cipherdom, status as unelected PM, uninspiring and recessive personality, and a past as loyal servant of the Nehru-Gandhi Family—that made the octogenarian Dr Singh attractive to the Congress president, also rendered him eminently unsuitable for the job of leading a young, restless and ambitious nation with 60 per cent of its population below the age of 30. Manmohan Singh once truthfully called himself an ‘accidental prime minister’, which about sums up his worth. That he hung around for ten years living up to this tag defines the opportunities India has missed to make a mark in the new millennium.

A decade back, India showed some slight promise of finally rising to the occasion and occupying the great power position that has been there for the taking but for the diffidence and hesitant mindset of its rulers. After a decade of the Congress- headed United Progressive Alliance Government, however, that promise has been doused. The reason why this happened may be gleaned from the remarks National Security Adviser Shivshankar Menon made to the Confederation of Indian Industry on 24 March in the waning days of this government. In dealing with the changes in the “global security environment”, he said, India has three options. It can do (1) what all countries do, “hedge”, which he termed “a safe low-risk strategy”, (2) “surf or ride the wave of change” holding out hope for “greater gains” but also taking on heightened risk, or (3) it could “shape the future”, an option, he says, that is “obviously the best… as it offers the most gain [but] requires the greatest investment of effort and involves the highest risk”. It means shaping the international system, something only great powers do, and is an option, he implied, India cannot afford and is incapable of realising because there are too many “variables” to master and no guarantee of “easy or certain outcomes”. In the event, he recommended a mix of the three strategies: shaping the environment “domestically” and in the “immediate neighbourhood”, and “hedging or riding the wave in other cases”. It turns out this is what the Manmohan Singh Government was doing all these years. It is important to note that the NSA is comfortable thinking of India as a piece on the global chessboard rather than a power able to move the pieces. This is evident from the fact that neither Menon nor his boss, Dr Singh, has ever spelt out a strategic vision for the country or displayed the will to realise it during their long years in office.

In any case, how does the UPA’s foreign policy measure up even against these low standards? Starting from inside out, the enabling domestic milieu simply did not materialise in the two terms of the UPA Government, what to speak of anything bigger. The supposed consensus for the nuclear deal with the United States, for instance, was a sham. It was proved by the shameful shenanigans in Parliament of multi-crore bribes on offer and Samajwadi Party doing a last-minute turnaround to support the Government that pushed the deal through on the basis of advocacy on its behalf by APJ Abdul Kalam, identified by Mulayam Singh as the “father of the [Indian] Bomb” (!); if Kalam parented anything, it was the satellite launch vehicle powering India’s Agni missiles. That the deal wasn’t the magic wand it was touted as by Manmohan Singh to obtain “20,000 megawatts by 2020” and gain international heft is evident in the fact that there’s not a single contract yet for an imported reactor, India’s entry to the Nuclear Suppliers Group remains barred, and it does not enjoy the “rights and privileges” of a nuclear weapon state promised in the 5 July 2008 Joint Statement of Manmohan Singh and US President George W Bush in Washington.

Showcasing its naivete, the Indian Government in this quid pro quo arrangement, instead of being in lockstep with benefits accruing to the country, speedily accepted international safeguards on the bulk of its dual-use Indian natural uranium fuelled reactors and thus curtailed the country’s surge capacity to produce weapon- grade plutonium and directly hurt India’s nuclear posture, and, with the ‘islanding’ of its weapons-related facilities, the integrity of its nuclear energy programme as well. Worse, it is diverting the country to the expensive enriched uranium- fuelled reactor regime that sustains the nuclear industries of France, America and Russia, while starving India’s indigenous programme for heavy-water moderated INDU reactors of much needed funds. To think that this deal is ballyhooed as a boon and bonanza by the departing Congress Government suggests it cannot differentiate gain from loss and liability. In line with this strategic nuclear myopia was Manmohan Singh’s undue enthusiasm for US President Barack Obama’s ‘nuclear summits’—the latest such event taking lace at the Hague on 24- 25 March—that aim to disarm weak nuclear weapon states, among them India!

If the Congress government has dug a grave for homegrown nuclear reactor technology and potentially turned India towards nuclear energy dependency, its failure to get Mamata Banerjee in West Bengal and Jayalalithaa in Tamil Nadu to play ball has had adverse regional consequences. The issues of straightening of the border and signing of an accord for equitable sharing of the Teesta River waters with Bangladesh are hanging fire, frustrating the friendly Awami League regime of Sheikh Hasina. Likewise Jayalalithaa’s interventionist tilt towards Jaffna Tamils has alienated Colombo, pushing it into cultivating China as a counterweight. Meanwhile, with Kashmir a perennial irritant, good relations with Pakistan remain a dream only awaiting the next terror attack to turn into a nightmare. In each of these cases, Manmohan Singh showed no political foresight or will to ram the preferred solutions down resistant throats of the chief ministers of these border provinces. A string of unpacified countries on its periphery, as a result, has left India too preoccupied with its near abroad to think and act strategically against China elsewhere in Asia.

Whence the repeated missed opportunities to firm up a front of like-minded states that feel uneasy about an aggressive China in the latter’s soft underbelly— Southeast Asia and on its exposed flank in the Far East. In 2007, the Japanese Prime Minister Shinzo Abe articulated his concept of a ‘security diamond’ of Japan, India, United States and Australia to contain and ringfence China. Three years later, his speech to Indian Parliament entitled ‘Confluence of the Two Seas’, which pushed this security architecture, elicited little interest from a Manmohan Singh regime transfixed by the idea of peacefully resolving India’s border dispute with China. It was only after the Chinese People’s Liberation Army units made incursions into Ladakh’s Depsang Bulge in April 2013 that the Government woke up to the harsh reality that a powerful untrammelled China was more likely to resort to arms than a China tied down by countries on its rim militarily cooperating with one another to keep Beijing guessing, more so if it involved a bold and newly ‘militaristic’ Japan flexing its muscles and intent on fighting off Chinese bullying tactics on the disputed Senakaku Islands.

Belatedly, New Delhi picked up its game and responded to the Japanese overtures. The visits to India by Emperor Akihito in late 2013, followed closely by Abe’s as chief guest at the Republic Day celebrations this year, have given Beijing pause for thought. However, India’s deafness over the years to pleas by the governments of Vietnam, Indonesia and the Philippines to sell them Brahmos supersonic cruise missiles to keep the powerful Chinese South Sea Fleet home-ported in Hainan island quiet in the proximal seas has to various degrees soured these countries towards India. New Delhi has tried fleshing out an Indian ‘net security provider’ role in the Indian Ocean Region which the US Secretary of State Hillary Clinton had sketched out for India, without so far getting much traction. True, India did gird up its loins to deliberately retain a stake in an offshore oil block in the South China Sea claimed by China and Vietnam. But its unwillingness to commit more fully to the security of these small countries has led to Manila and Hanoi seeking a US role to dampen the Chinese ardour to use force, which ended in the past in the annexation of the Mischief Reef (in the Spratley Island chain) previously under Philippine control and of Vietnam’s Paracel Islands. And it prompted Jakarta to secure the all-Russian variant of the Brahmos, the Ramos, directly from Moscow.

Similarly, while Central Asian states such as Kazakhstan, Tajikistan and Uzbekistan would have liked India to extend its presence in the region beyond the air base in Ainee (in Tajikistan) to afford them a modicum of security and enable them to resist both Russia and China, the Indian Government’s lack of interest in doing so has compelled them to accept Moscow’s more forceful attempts at re-establishing its sphere of influence even as they plug into the burgeoning Chinese economy to get the best deal.

In sum, the conservative economist in Manmohan Singh spawned an extremely risk-averse attitude in government that so affected Indian foreign policy that the world’s expectation of India as a player of consequence has taken a hit.

For a country with all the attributes of great power, this is an unacceptable diminution of stature.

Bharat Karnad is Professor in National Security Studies at the Centre for Policy Research, New Delhi, and blogs at www. securitywise.com