Mulayam May Lose Strength in the RS; Where’s the Thackeray Roar?; A Life of Dissent; Naga Negotiations; The Dera Riots That Could Well Have Been 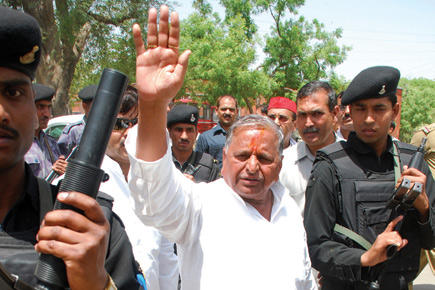 Mulayam May Lose Strength in the RS; Where’s the Thackeray Roar?; A Life of Dissent; Naga Negotiations; The Dera Riots That Could Well Have Been


Mulayam May Lose Strength in the RS

The Samajwadi Party (SP) is facing a casteist dilemma in Parliament. Seven of its Rajya Sabha members will retire in July, but the party’s strength in the UP Assembly can allow it to re-elect only two of its candidates to the upper house.

Sources say the party is not being able to decide which of the two social categories it should opt for. This is significant because Mulayam Singh Yadav is hard-pressed to ensure at least one seat each to Muslims, Thakurs and Brahmins—the three social groups that are expected to play a crucial role in the Assembly polls in early 2012.

The party has a total of 88 votes in the Assembly. Thirty-seven votes are needed to make a candidate win. The SP can get two of its candidates elected on its own and would have 14 remaining votes that could be shared with others.

Sources say two traditional Muslim faces of the SP, Azam Khan and Rasheed Masood, are competing to get a Rajya Sabha slot, and two Thakur faces, Mohan Singh and Raja Bhaiya,are equally determined to make their way into the upper house.

For Mulayam, assuaging the sentiments of Muslims and Thakurs is essential if it wants to remain in the reckoning in UP. The party, however, cannot afford not to have any Brahmin leader in the Rajya Sabha. After the demise of Janeshwar Mishra, the SP has been left with only one Brahmin face in the upper house—Brij Bhushan Tiwari. But Tiwari is one of the SP’s seven Rajya Sabha members whose term will end on 4 July.

Sources say hectic negotiations are on to align with the Congress, which has 21 votes in the Assembly, and rope in two independent MLAs to get a third SP candidate elected to the Rajya Sabha. Rajya Sabha member Mohammand Adib, who had won as an independent supported by the SP and Congress, has opened up a dialogue with the Congress leadership to make the two ends meet, sources say.

Why is Raj Thackeray silent now? What has happened to the divisive politics pursued by him and his uncle Balasaheb Thackeray? Singer Asha Bhosle is not the first to snub the Thackeray brand of politics. Shah Rukh Khan, Aamir Khan, Sachin Tendulkar and Mukesh Ambani, too, have come out openly against their bid to strike at the root of Indian nationhood. “Mumbai belongs to all,” Bhosle said at a function where she was sharing the dais with Raj Thackeray. Indeed, a brave new world of Mumbai celebrities seems to be emerging. And the Thackerays’ silence shows they are unable to understand what has hit them. Bhosle has gone ahead of other B-town celebrities in explaining why Mumbai belongs to all. “No one can snatch the job of a man who works here from morning to evening. Our people [Maharashtrians] should also show the readiness to work hard,” she said, defending the toiling masses against the state’s parochial leaders and their  lathi-wielding goons. It’s time other Mumbai celebrities spoke up in the nation’s defence.

A Life of Dissent

Veteran Kashmiri separatist leader Syed Ali Shah Geelani’s autobiography will soon hit the stands. Titled Wular ke Kinarey  (On the Banks of Wular [lake]), it offers an insight into his early life. Geelani, who is in his 80s, is currently undergoing treatment at a hospital in Delhi. He says he was inspired to pen his memoirs by his son-in-law Iftikhar Gilani. Though born into a poor family—his father was a labourer with the Irrigation Department—Geelani pursued his studies with the help of scholarships. Later, he worked as a reporter in an Urdu publication and was influenced by the Jamaat-e-Islami. The autobiography will be brought out in two volumes. He says the second volume will take time since he wants to write in detail about his last 20 years in J&K.

Is the NSCN (IM) Sincere About Going Ahead?

There is hope, finally, that after about 50 rounds of negotiations between Naga leaders and the Centre since 1997, there is some sort of tangible agreement on the cards. New Delhi, it is believed, has offered more autonomy but has categorically told the leaders of the Naga insurgent group National Socialist Council of Nagaland (IM) that there would be no discussion on sovereignty. It has prepared a 29-point proposal to take the discussions forward, which includes greater autonomy and financial sops and perhaps even a separate flag like Jammu & Kashmir’s.

But, while the Government appears flexible on talking to insurgent groups in the Northeast and Kashmir, the same cannot be said about the Centre’s dealings with Maoists. Ever since its ceasefire agreement with New Delhi, the NSCN (IM) has violated the ceasefire norms many-a-time by carrying out abductions and indulging in extortion. The NSCN (IM) cadres have openly flouted rules by carrying arms outside the designated camps in Nagaland.

Elsewhere, even after being betrayed by groups like Assam’s Ulfa, the Government has appeared more than keen to initiate dialogue and has even recently released two top Ulfa leaders to facilitate talks. Those who are against talks with Maoists have always maintained that negotiations with Naxals are not possible as there is no common ground and that the Maoist leadership is hellbent on continuing with violence. But the same critics are silent when the NSCN (IM) passes an annual budget of Rs 20-25 crore every year, most of which comes from extortion and drug trafficking and arms running.

The groups have also been actively recruiting new cadres—something which the intelligence agencies are well aware of. In fact, the same issue was raised by an expert committee of the Planning Commission on development challenges in extremist affected areas.

Advocating that the Centre should talk to the Naxal groups, the report asks: ‘In J&K, the Government has more than once conveyed its willingness to hold talks with any group which is prepared to come to the negotiating table. Why a different approach to the Naxals?’

It’s time for New Delhi to pay heed to suggestions from its own bodies. No matter how bizarre they may be—that is how Union Home Minister P Chidambaram described the Maoist offer for talks—the doors for talks must be kept open.

The Dera Riots That Could Well Have Been

The violence that erupted in Punjab and Haryana on the eve of Holi was shortlived, but the governments there cannot allow themselves to become callous. The pattern and spread of the incidents only shows that the arson was well planned, executed with precision and aimed at causing riots.

It was attributed to the fresh murder case registered by the CBI against Dera Sacha Sauda chief Gurmeet Ram Rahim Singh, though he denied it the next day at a large congregation at Sirsa. Within a few minutes of each other, bands of men with their faces covered torched nearly 40 vehicles, including 30 buses. They tried to set four trains and the Moga Deputy Commissioner’s and SSP’s offices on fire. More than 50 of them were arrested across the two states and prohibitory orders issued. The Centre sent out 1,200 paramiltary personnel to the two states. The Haryana Police recalled its personnel from their Holi leave and things were brought under control.

The timing of the violence, just two days before Holla Mohalla—festivities attended by a few lakh devotees at the birthplace of the Sikh religion in Anandpur Sahib —makes it clear that it was aimed at causing a bigger impact: setting up clashes between the Dera’s mostly lower caste followers against upper castes. The two states, particularly Punjab, would have burnt for days if the violence had not been contained in time. Of late, Punjab has become a hotbed of sect-related violence which the Akali-BJP government in power reacts passively to. It needs to put aside its politics and focus on restoring law and order any time such incidents occur before they blow up.