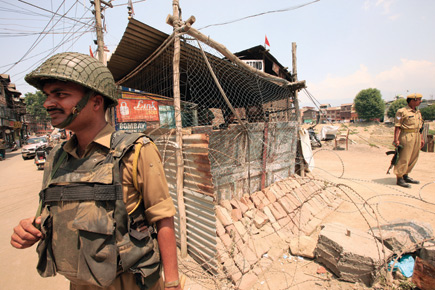 At a time when the Centre is considering a reduction of troops in Kashmir Valley, a request by the Central Reserve Police Force (CRPF) has left many in the security establishment red-faced. Following the recent killing of four of its personnel by militants in the north Kashmir town of Sopore, the CRPF has pressed for police protection of its men. It has essentially sought protection from the local police when their personnel are out shopping for essential items. It has further asked for security combing of a particular area by the police before any senior CRPF official’s visit.

Emphasising the necessity of police protection for CRPF personnel, it cited the Sopore example, where it claims its men were on road-opening duty. But police sources refute this, saying the four men were killed while they were watching a cricket match being played between local boys in Sopore. In a report submitted to the state Home Department, the police has said that the CRPF men were taken completely off guard. It is believed that the militants responsible for the shootout walked away with their service rifles later. The report alleges that the CRPF personnel did not follow standard operating procedures.

In another incident, a senior CRPF official who visited Sopore unannounced found himself stuck in an episode of stone pelting—a norm in the Valley nowadays after Friday prayers. The officer’s guards had to fire in the air to save him. The firing further deteriorated the law and order situation in the town.

The CRPF defended the firing later, saying this was done only after bullets were fired at the convoy. In this case as well, the police trashed these claims, maintaining that nothing of the sort had happened.

In any case, the CRPF’s latest request, senior police sources say, has come as a shot in the arm for J&K Police, which has been saying that it is completely equipped to handle insurgency in Kashmir.

It was indeed an irony. The same day that the CPM’s mighty Kerala State Secretary Pinarayi Vijayan appeared in a CBI trial court to get bail in the multi-crore SNC Lavalin corruption case, the party’s national leadership initiated a ‘rectification process’ reiterating lost communist values.  Pinarayi’s appearance has also come during the 70th year celebration of the historic meeting of revolutionaries that led to the formation of the communist party in Kerala. The party was formed 70 years ago to fight vices like corruption.

Pinarayi is the first top Left leader to face CBI investigation not only for corruption but also for criminal conspiracy and blatant misuse of power.  In the meantime, the rectification document re-preaches the golden values of an ideal communist, such as simple living, transparent public life, the fight against corruption and adherence to atheism.

There Goes the Thakur

Amar Singh has quit the Samajwadi Party as general secretary and its spokesman.  Singh announced that he was also quitting as a member of the party’s parliamentary board, but would continue as an ordinary member as long as the SP leadership wanted him to do so.

Ordinarily, the resignation of a high-profile politician from his principal party should arouse tremendous interest. But not Amar Singh’s. By his own admission, Singh had resigned thrice earlier, but these had been rejected by party chief Mulayam Singh Yadav. In a recent interview, he said that politics was so ugly and cruel that he wanted to quit it altogether.

Two days before his resignation, he described UPA chairperson Sonia Gandhi as benevolent. This is just a few days after he had praised former Prime Minister and BJP leader Atal Behari Vajpayee on his blog. And even as he was resigning, he said joining another party wasn’t ruled out. No surprise there either.

Reach of The Untouchables

When policemen turn rogues, it becomes a daunting task to hunt them down as they are well versed with the loopholes in laws and the strengths and weaknesses of their colleagues. They can be brought to book only if there is a strong will to do so. If not, such rogues can wreck havoc with law and order.

Recently, Mumbai Police Commissioner D Sivanandan recommended that five policemen, including two IPS officers, be dismissed from service for attending and dancing at a party hosted by Chhota Rajan’s gang members to celebrate the release of the don’s alleged right-hand man, DK Rao.

Clippings of the party— shot by a mobile phone camera—were circulated to the media by a rival group of policemen. Only after the media published the photographs did Sivanandan and Maharashtra Home Minister RR Patil wake up to the reality of the rot within Mumbai Police.

According to sources, though the underworld connections of the tainted Assistant Commissioner of Police Prakash Wani were no secret to his bosses, no one had initiated any action. He was issued warnings but not even a departmental inquiry was set up to probe the depth of his involvement.

At a time when Mumbai and other parts of Maharashtra are on the terrorist radar, the increasing underworld  connections of the state’s police personnel should be a cause for serious worry.

The state home minister may have heeded Sivanandan’s request for Wani’s dismissal. But sources reveal that  Wani is well connected politically. They say that  many years ago, when the then Mumbai Police Commissioner Ronnie Mendonca had recommended Wani’s dismissal for the same reasons, Wani pulled strings and was sent on a UN deputation to Kosovo.

So, Sivanandan should not pat himself on the back just yet.  Corruption has become an integral part of the police force in Maharashtra. Gangsters and politicians have become godfathers and rogue policemen dip into their ‘goodwill’ regularly for favours. It is little wonder then that the incumbent joint commissioner of Mumbai Police (Crime) Rakesh Maria had once remarked, “A few honest men is all I ask for.”

Police honesty is rare indeed. When a policeman has a problem and goes to a politician’s house to seek favours, instead of his boss’s office, therein lies the genesis of the problem. There is always a price to pay. When the pound of flesh is inevitably extracted in lieu of favours granted, that is when cops who dance at underworld parties escape unscathed.

The State as Accomplice

Nineteen years after he molested a young girl and changed the course of her and her family’s lives forever, an unrepentant former DGP, SPS Rathore, has been booked for abetting her suicide. His wife, Abha Rathore, who is also his lawyer, had filed a bail plea in a Panchkula court last month seeking the court’s protection for her convicted husband and accusing the media of propaganda against him. This is one charge that the media should gladly plead guilty to.

It wasn’t until the media started a campaign against the six-month term handed out by the court to Rathore a few weeks ago, and reiterated the facts of the case, that it got such wide all-India attention. Though, legal experts are now divided on whether the fresh FIR against Rathore under Section 306 IPC for abetting Ruchika Girhotra’s suicide will hold ground.

Under pressure from the public opinion generated by the media, the state government and the Centre have started fresh investigations into the matter, decided to take away Rathore’s medals and even decided to investigate whether he was responsible for getting Ruchika thrown out of school more than a decade-and-a-half ago.

At the heart of this problem is a power hierarchy that not only allowed Rathore to get away with Ruchika’s molestation and the harassment of the victim and her family, but helped him thrive. Beyond socially entrenched perceptions of state-given supremacy, the very State needs to be taken to task. Rathore was an IG when he molested Ruchika, but went on to become the DGP.

While the State is guilty of giving a molestor charge of protecting its citizens, including women, the Centre is responsible for shamelessly looking the other way while the horror happened.