Looking for a Lifeline; Govt Snubs Dantewada; Erased from Congress History; Let Us Not Trifle with the Cause of Justice; Bedroom Politics, a Public Affair 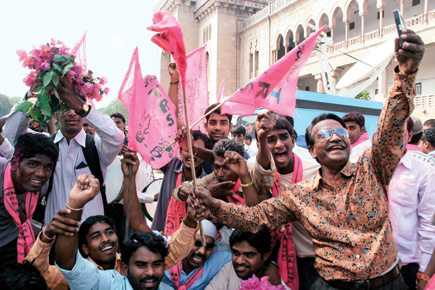 Looking for a  Lifeline; Govt Snubs Dantewada; Erased from Cong History; Let Us Not Trifle with the Cause of Justice; Bedroom Politics, a Public Affair.


Looking for a  Lifeline

One of the remedies the Congress High Command is working on in its desperate bid to contain the crisis in Andhra Pradesh is to effect top-level changes in the state. It’s planning to make a Telangana man the head of the state government.

Sources in the Congress say Chief Minister K Rosaiah may be shown the door if  the Telangana-induced crisis in the state does not ebb soon. Rosaiah had become the Chief Minister of Andhra Pradesh on 3 September this year following the death of YS Rajasekhar Reddy in a helicopter crash.

The Rosaiah government has been put on shaky ground following 13 pro-Telangana  ministers’ refusal to join work till the Centre puts in motion the process to form a separate Telangana. These ministers have so far resisted all pressure from the High Command to withdraw the resignations they had submitted to Congress president Sonia Gandhi.

According to sources, as the Centre is unable to immediately announce a deadline for the bifurcation of Andhra Pradesh, the Congress High Command expects that it can win a truce in the state by replacing Rosaiah with someone from Telangana.

Among the names that  are doing the rounds for the top slot are Minister for Urban Development Jaipal Reddy and AICC in-charge of West Bengal and Jharkhand K Keshav Rao.

While Reddy represents the Chevella parliamentary constituency, which falls in the Telangana region, Rao, who also hails from Telangana, is a Rajya Sabha member representing Andhra Pradesh.

Sources maintain that a change of guard in the state may go a long way in putting the Congress house in order in the state. Apart from providing a face-saver to the party’s MPs and MLAs from Telangana, it would also assuage the sentiments of many of the party’s legislators who have been opposing Rosaiah ever since he became CM.

To the Centre, sources say, the move would provide much-needed breathing space to formulate a proper strategy on Telangana. This would also ensure that the opposition in the state doesn’t run away with the political dividends that might accrue from the mess.

Union Home Minister P Chidambaram has been asked to stay away from a civil society-sponsored public hearing (jan sunvai) in Chhattisgarh’s Naxalite-affected Dantewada district, scheduled on 3 January. He had been invited by civil society groups after they met him in November. Chidambaram had earlier expressed his willingness to attend the meeting, which was being interpreted as his being open to political negotiations. But sources revealed that Chhattisgarh Governor EAS Narasimhan wrote to the PM expressing concern over Chidambaram’s proposed visit. The Prime Minister’s Office then forwarded the letter to the Home Minister with an advisory that he should not attend the public hearing. This comes shortly after a peace march taken out by civil groups opposed to the Government’s anti-Naxal offensive was disrupted, allegedly at the behest of the Centre.

The Congress’ disassociation with PV Narasimha Rao, who was Prime Minister between 1991 and 1996, is complete. After criticising him in the winter session of Parliament for failing to save the Babri masjid—that too when Rao is no longer alive to defend himself—he has now been stripped of even the credit for initiating India’s 1991 economic reforms.

“Rajivji did not stay with us to see his dreams being realised, but we can see reflections of his thoughts in the party manifesto for the 1991 elections. That became the basis for economic policies for the next five years. These policies gave a new direction and strength to our economy and our society,” Sonia Gandhi said on the occasion of the party’s  125th anniversary on 28 December. And Manmohan Singh, who was Finance Minister during Rao’s tenure, seemed inclined to agree with that view.

Let Us Not Trifle With the Cause of Justice

As a fallout of the Ruchika Girotra molestation case, the Union Home Ministry has come up with a new directive for the police: from now onwards, it will have to file an FIR (First Information Report) on every complaint. In this regard, a circular will be sent out to all states in the first week of January. All police stations will now be required to register FIRs, instead of merely jotting down complaints in a diary.
For decades, the police have been avoiding lodging FIRs, mainly to escape the trouble of investigation. Besides, the lower number of FIRs filed also ensures that the crime graph for that particular area comes down.

Those who have welcomed the Home Ministry’s latest directive point towards cases such as Nithari where FIRs in cases of missing children were not lodged for months. But they fail to understand that the mere lodging of an FIR does not mean that the police will take the pains to take an investigation to its logical conclusion. What, for example, has the police done after lodging FIRs in the cases of umpteen number of missing children?

The lodging of FIRs also will not ensure—as the Ruchika Girotra case has proven—that rich and powerful people involved in criminal acts will be caught and put behind bars.

While making an FIR mandatory may be a good beginning, a missing FIR is not all that ails our policing system. The biggest impediment to effective policing is the police-politician nexus. In the Ruchika case, too, the accused, former Haryana DGP SPS Rathore, went unscathed since he was being shielded by Haryana politicians.

The UPA Government might be trying to set an example by making sure that fresh FIRs are lodged in Ruchika’s case, and by mulling over a new law on sexual offences. But responses such as these to a particular case of public outrage amounts to a knee-jerk reaction, and is not enough. The cause of better justice demands complete police reforms.

Sex and the Indian Politician would be a very brief book if you go by the published accounts in the Indian media. But if you could tap into what is common knowledge within Delhi’s incestuous circle of power, politics and media, the collected works of Shakespeare would dwarf in comparison.

The excuse we, in the media, have always offered in the face of this reality is rather high-minded—a politician’s personal life is his concern. But did that view ever stand the test of scrutiny? The case against ND Tiwari—and the case is yet an allegation—is not that he slept with three women. At his age, that should excite the medical fraternity, but should be of no concern to us. Neither is it that he paid for the sex. While prostitution is an offence under the law, it again is of little concern to most of us if those involved are willing participants.

The case against Tiwari is that he was pledging government favours in exchange for sex. And is this really the first time this has happened? Is it that all of us high-minded journalists know of no other instance when sex has been so used? Have ministers never traduced the name of the Government of India on visits abroad? Have starlets never been used in the bargaining for power?

Politicians indeed revel in the fact that transactions that are responsible for much of the corruption in our political culture are relegated to the domain of the private. It has never been our job to report things as politicians see them. It could be said that we don’t have the evidence to write about such things, but this is only because we have chosen to look away. Yes, let us use discretion, but that discretion should not become blindness.