In UP, Congress Plays Communal Card 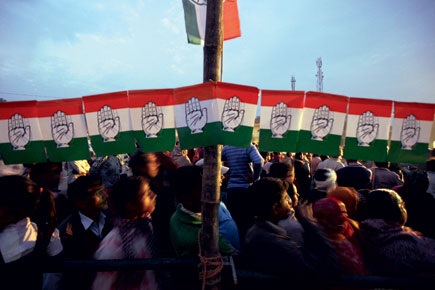 
Only a few weeks ago, the Congress government in Assam was accused of failing to protect the state’s minorities. This failure, many believe, was a signal to Muslims drifting away that their safety lies with the Congress. Such communal opportunism is not new to the party. And now there is fresh evidence of it from Faizabad in Uttar Pradesh.

Consider the career of the man slated to assume charge as president of the Uttar Pradesh Congress Committee (UPCC) on 11 September: Nirmal Khatri. This Congressman is not just Faizabad’s representative in the Lok Sabha, he is known to be close to both Congress President Sonia Gandhi and her son and party general secretary, Rahul Gandhi.

Khatri’s career with the party began in the 1970s, when he joined the Youth Congress. In 1982, he became president of the Youth Congress, and was first elected to the Lok Sabha after Indira Gandhi’s assassination in 1984 from Faizabad. Five years later, Khatri grabbed all-India attention when Rajiv Gandhi kicked off the party’s 1989 electoral campaign with a rally in Faizabad, the district housing the hotspot of the time, Ayodhya. In that rally, Rajiv Gandhi promised the country ‘Ram Rajya’ if his party were voted back to power. That year, the general election was held along with UP’s Assembly polls. Locals still remember the twin polls for the unusual synergy between the Congress and Bharatiya Janata Party (BJP) at Ayodhya. While Khatri was the Congress candidate for the Lok Sabha seat, Lallu Singh was the BJP candidate for the Ayodhya Assembly segment. The synergy was evident in the common poll slogan: ‘Ek vote Lallu ko, ek vote Panja ko’ (one vote to Lallu, another to the hand symbol).

That bout of closet communal cosiness failed to pay off. Khatri was defeated by the CPI’s Mitrasen Yadav, who publicly declared that by beating Khatri, he had trounced not just the Congress but also the BJP. That general election was also an all-India rout for the Congress, which lost over half its Lok Sabha seats.

Even after that, Khatri didn’t give up playing footsie with Hindutva forces. In October 1990, when the Vishwa Hindu Parishad (VHP) issued a call for Kar Seva to build a Ram temple on the site where the Babri Masjid stood in Ayodhya—hoping to draw devotees swarming in for a holy parikrama of what’s believed to be the birthplace of Ram—the then Chief Minister of UP Mulayam Singh Yadav appealed to people not to participate. In fact, the parikrama that year was virtually banned. Enraged by this, Khatri led a series of protest dharnas to force the UP government to let kar sevaks into town.

After the events of 6 December 1992 left both the Babri Masjid and Congress party in a heap of rubble in UP, Khatri withdrew to the margins of Congress politics, playing just a small district-level role that few took any notice of. And so it was till he made his comeback in the general election of 2009 as Faizabad’s MP.
Softness towards communal forces, however, is not all that Khatri is identified with. In and around Faizabad, he is also known as a key figure in the management of the district’s famous Saket College. “In this college, he is remembered as the person who singlehandedly institutionalised corrupt practices,” says a college teacher under anonymity. “For over a decade till August 2011, he remained chairman of the college managing committee. Apart from corruption getting institutionalised, his tenure also saw anti-Dalit feelings gain force. Hansraj, who had been selected as a Hindi teacher under the SC quota in June 2010, could not be allowed to join the college. Although presently Khatri is just a member of the committee, nothing happens without his consent.”

Indeed, the Congress desperately needs a change of guard as well as approach in UP. Its hopes of revival generated by the Lok Sabha polls of 2009 were shattered by the outcome of the Assembly elections earlier this year. Fact is, the Congress remains badly fragmented in the state. Attaining any coherence would require leadership that is aggressive rather than timid on issues that are integral to its future in this phase of politics two decades after the Ayodhya flare-up (and a couple of years after the party’s response to a court judgment served as déjà vu of the party’s stance on it).

Khatri’s Hindutva leanings have been on display for years together, and having him sound like an unequivocal exponent of secularism would be a far-fetched expectation. Nor can his own popularity be assumed to be on the ascent. He was unable to save his party even a single of the five Assembly seats of Faizabad in the last Assembly polls.

By any reckoning, it is a crucial state. With as many as 80 Lok Sabha seats, it simply cannot be ignored by any pan- Indian party. But the way the Congress operates in the state, one wouldn’t guess it. Its UP strategy has been marred by wanton adhocism. So frequently has it kept shifting priorities in the state and so heavily has it relied on the Gandhi family’s charisma alone for its revival here, that voters have it hard taking it as a serious contender for their favour.

When Rahul Gandhi went visiting Dalit homes in UP, it created a flutter if not wave in his favour. But once the Congress was routed in the Assembly elections, not only did he give up this effort in a huff, he even made a public point of his Brahmin identity. Also, on the Assembly campaign trail, while one set of Congress leaders promised reservations for Muslims in government jobs, another set was busy with Hindu yajnas in Varanasi. None of it helped the Congress win too many votes, given the poll results. It was the Samajwadi Party that romped home.

Long before its collapse in UP, the Congress had succeeded in the state—as in other parts of the country—on its successful projection of regional leaders whose appeal could cut across caste and creed (‘Naa jaat pe, naa paat pe, mohar lagega haath pe’ went one of its old slogans). The party’s problem today is that it is neither able to project such a regional satrap, nor able to make up its mind on whose votes to woo as its core social base in UP.

The message of the last Assembly polls was unequivocal: voters in UP, as in other parts of the country, would prefer one of their ‘own’ rather than any ‘charismatic’ leader from distant Delhi. Fostering such leadership under someone who can take all segments of voters along is the only way out for the party.

But the Congress seems to have decided on swerving its strategic aim at a slice of the state’s upper-caste votes in the hope that Muslim votes would follow once it’s clear that the party has a real chance of winning a significant number of seats. This is a cynical ploy reminiscent of the soft Hindutva that wrecked the party in UP in the first place. It’s odd that India’s oldest party shows no sign of learning anything from its own past, or even from its fate in Gujarat. Voters, upper-caste or otherwise, are not raring to vote for a B team of the BJP. But that is exactly what the Congress with Khatri at its helm in UP will look like.