“I am there… you want me to speak to anyone”

“What I do is, let us see, I will be honest with you. I haven’t even gotten up, I cannot put pen to paper. Otherwise, in any case, I am there and you want me to speak to anyone, not that you don’t know anyone.” 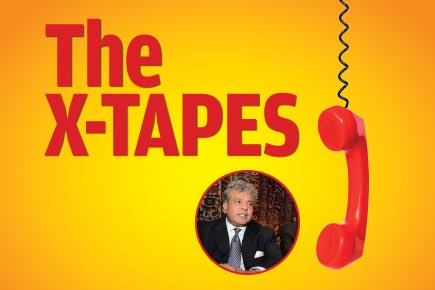 “If you write… that would be so good”—NIIRA RADIA; “I’m there… you want me to speak to anyone”—SUHEL SETH


“If you write… that would be so good”—NIIRA RADIA; “I’m there… you want me to speak to anyone”—SUHEL SETH

Just a casual chat between Niira RADIA and Suhel Seth, spanning topics as diverse as Ratan Tata, Sunil Bharti Mittal, the Ambani brothers and a dog named Google. It’s a long chat, especially given that Seth was apparently suffering from a toothache.

RADIA: Hi! You are really down huh?

SUHEL: I am miserable, you cannot imagine.

RADIA: My God! You are sounding awful.

SUHEL: How is your tooth?

RADIA: My tooth, the swelling has gone down. A little pain, but I will be okay, but I am on medication.

SUHEL: But tell me, what happened? Wasn’t there some court case today?

RADIA: It has got listed for the 20th.

RADIA: 20th, 20th, 20th of July. So we will have another grind for another week and listen to all this, nonsense they will put out.

SUHEL: It is just ridiculous.

SUHEL: But I tell you it is so sad.

RADIA: Toh Suhail kya karoge. Batao na kucch karo [So Suhai, what will you do. Please tell me, do something].

SUHEL: Mein to abhi ja hi raha hun [I am just about to leave] one minute, my dog is also going berserk. (Shouts) Google, sit down…

RADIA: I love that name Google.

SUHEL: Ha, because he can find anything that none of us can. Obviously, because he has hidden it… What I do is, let us see, I will be honest with you. I haven’t even gotten up, I cannot put pen to paper. Otherwise, in any case I am there and you want me to speak to anyone, not that you don’t know anyone.

RADIA: No, but what I thought was if you write… that would be so good. But you’ll talk from there or are you on a pucca [full] holiday?

SUHEL: Actually I am on a pucca holiday, you know why? Because every bloody time I go there is some CII nonsense, there is some other nonsense. Every time I say, ‘Mein to phone hi leke nahi ja raha [I am just not going to take the mobile phone along].’

RADIA: I am trying to get a break, it is just crazy.

SUHEL: Huh? But when are you going to take a break.

RADIA: I do not know. I was hoping to do it last week, but it did not happen. So maybe after the 20th I will take off a week or something.

SUHEL: Where? In Europe?

SUHEL: If you are in London, then just SMS me. I am back in London on the 24th.

RADIA: Yeah, I should be. No, then I would go to for that Michael Jackson’s concert.

RADIA: The last concert I was supposed to go.

RADIA: Ya, well that is gone so I cannot go. And so I already got some of my friends to arrange it for us.

RADIA: But anyways, now we cannot go. Also, I know he is not there. We will do something else. I do not know, now with this matter coming up on the 20th, when I can travel. A lot of things going on; even on the Tata side there is so much going on. So I need to get away for a week…

SUHEL: But the Tatas thankfully are really under control on the media at least huh?

RADIA: The media is under control but there are a lot of other stuff that they are handling at the policy level.

SUHEL: Correct, correct, but I am saying thank God at least at the media level, there is no, nothing, it’s all good on the contrary.

RADIA: Ya, ya, it is all under control, but thank God thank God! Can you imagine if it were both (laughs)…

SUHEL : I swear man, it could have been unbelievable.

SUHEL: One thing only between the two of us… If the older fellow has so much of an influence, how come the younger brother is able to do so much?

RADIA: Ya, last time hua tha na [remember what happened the last time] Amar Singh ka nuclear deal ke baad [after Amar Singh’s nuclear deal]… It was limited to the period of three to four months… when they gave support for the nuclear deal. So it was only limited in that period. And after that Amar Singh made sure that he did what he could… and even all ED inquiries against Anil Ambani have started again.

RADIA: He has borrowed 10 billion dollars in two years.

SUHEL: But wasn’t there something that apparently he had taken money against some foreign holding or some rubbish like that.

RADIA: Basically, he has played according to the sort of figures that have [been] brought to us. He has already played around [Rs] 40 thousand crores in the market and lost it. So he has to pay back and his balance sheet is showing a debt of [Rs] 75 thousand crores. And unless he can bring in equity, which his brother won’t allow him to bring in because he has got the ROFR (right of first refusal)… he can’t do anything. So he can only fight us in the court and through media, whatever he wants. So he is in a tight corner.

RADIA: And this gas thing was nothing else… He is basically saying give me money.

SUHEL: But the older fellow should not succumb.

RADIA: Nothing at all, he is very sure.

SUHEL: They should really nail him.

RADIA: He is going to nail him now because he had enough of him.

SUHEL: And plus he is no one’s friend.

RADIA: Ya, he is no one’s friend. You know, Suhail, all industry is on one side and Anil is on one.

SUHEL: Ya, I was speaking at a function on June 30, I think at the HSBC thing, and we were together sitting at the same table. He was bitching… (inaudible).

RADIA: Yeah, he is back tomorrow in Delhi.

RADIA: He was also saying that he had enough of him. So everyone is on one side including the Tatas. Because Tata is also battling this issue out. And Anil is on one side. So maybe we should all be just together and put this misery to an end.

SUHEL: Misery! I cannot even laugh!

SUHEL: He is a pain in the ass, yaar.

SUHEL: If it weren’t for him, you would be on your holiday now.

RADIA: Isn’t it just my God! Chal [come on] I wouldn’t be talking to you otherwise.

RADIA: That is why you better get better soon.

SUHEL: I will. Are you in Delhi?

RADIA: I am in Delhi, yeah.

SUHEL: Oh, I guess I will give you a buzz tomorrow and let us be all, you know, hook for a drink.