How We Did the Undoable

The story of a seemingly impossible feat: a small team of media professionals defy scepticism and conventional wisdom alike to launch Gaon Connection, a weekly newspaper for rural India. And now politicians as well as corporate honchos eyeing India’s booming rural market are showing interest in it 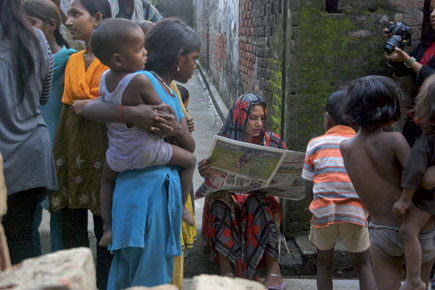 The story of a seemingly impossible feat: a small team of media professionals defy scepticism and conventional wisdom alike to launch Gaon Connection, a weekly newspaper for rural India. And now politicians as well as corporate honchos eyeing India’s booming rural market are showing interest in it


“Fantastic idea. It will never work.” I am quite used to people telling me this.

It is what a lady at India’s top event management company had told me clinically, as she reached for her coffee, when I told her we had set up a writer-led band where I would tell a story on stage, interspersed with original songs sung by the band.

It is what a top executive at another radio station had told me after I started my primetime radio storytelling show on 92.7 Big FM, telling stories every night in 35 cities across India from an imaginary city called Yaad Sheher, in an attempt to revive oral storytelling in India.

As it happened, they did work. Still, when we came up with the maddest idea of them all, I knew we were in for some serious bashing.

“A weekly rural newspaper. I am calling it Gaon Connection.”

It is a shame that there has been no professionally run rural newspaper in a country where 72 per cent of its people live in villages —that is about 850 million people, at least 100 million more than the entire population of Europe. This, when rural India shapes and controls India’s politics, and, if we go by a recent Crisil study, now spends more than urban India.

It is also a shame that mainstream newspapers devote all of 2 per cent of space to news from rural India, according to a recent study by Vipul Mudgal of CSDS. Even of this 2 per cent, some 36 per cent is devoted to issues like crime, accidents and disasters.

That’s because mainstream media in India looks at rural India through the prism of urban India. If we were to go by the picture painted by mainstream newspapers, rural India is full of people either waiting for their next crop or some ghastly event like a flood or caste violence. Between these two activities, nothing else is really supposed to be happening there.

But you know what? It is a whole new world out there now. Lifestyles, aspirations, career choices—everything is transforming. People eat chowmein and momos in rural India, lovers SMS each other, young people wear jeans and watch T20 cricket, women work in fields all day to earn Rs 60 and then go to rural beauty parlours to get eyebrows done. There is a huge new curve of aspiration and empowerment in rural India that is untapped.

Yet, they all said Gaon Connection was a brilliant but Utopian idea. They all said we had gone nuts pumping our personal income into this crazy project that had no future and was destined to fail.

So, on 2 December, as Uttar Pradesh Chief Minister Akhilesh Yadav’s helicopter took off after he launched Gaon Connection, and the hundreds of officials and policemen who had taken over our campus started to empty out; as rural readers held our 12-page, all-colour broadsheet newspaper printed on imported paper in their hands and started to read aloud its stories with great interest, I thought of them—the sceptics—as I stood alone in the mesh of bamboo barricades, facing a mud stage with a huge backdrop and these words in Hindi: ‘India’s people created India’s rural newspaper.’

I also felt like I was back at the British-era St Joseph’s College in Nainital, standing hesitantly and fearfully on the edge of the swimming pool, afraid to go into the water, with my swimming teacher threatening to throw me into the deep end. Standing in Kunaura village on 2 December, I felt as if I had indeed been thrown into the deep end of that pool.

But 11 weeks into our launch, we are learning to splash around a bit.

We are reaching not only large urban centres across 30 of UP’s 75 districts, but the last mile where no newspaper has gone before. This week we reached more than 1,000 villages. Over the next year, we are looking at reaching at least 25,000 villages in UP, apart from our urban and semi-urban penetration. Alongside, we are in advanced discussions with local partners to start Gaon Connection editions in Rajasthan (Hindi edition), Gujarat (Gujarati edition) and Maharashtra (Marathi as well as Hindi editions), working with distribution partners like self-help groups, retail distributors and our own network of Connection Centres—manned by people with fixed addresses in the hinterland who we are training to become our stringers, distributors or both.

Even as we run into more and more people who want to work with us, we are finicky about a few things.

We will not sell news. We will not give our local reporters advertising targets—a farcical practice that has become one of the biggest diseases of the news business. And we will never lie about circulation figures. We started with 10,000 copies and we reasonably aim to have a circulation of 100,000 in UP alone over the next 15 months. We are compiling and putting online a list of villages we are reaching.

The funny thing is, we don’t have any investors yet. We are out to prove that even ordinary people can create a newspaper in India. We prefer demonstrating our work on the ground rather than doing projections with numerical jugglery in a business plan on a PPT. (I was horrible at maths anyway.)

We don’t care for any frills. We operate from a small office on the edges of Lucknow where there is no air-conditioning, and some windows are held together by thick cardboard; the conference room table is the pink dining table I grew up eating on in Nainital, and the fridge, some computer tables and a wooden bed are all donated. Our approach has been a guerilla one. With no advertising budget, we launched a tongue-in-cheek online campaign that got us a lot of attention. The first in a series of posters said: ‘We tried to raise the lakhs. We couldn’t. Now India’s people will create India’s rural newspaper.’ Then we launched a series that used local words like ‘rangbaaji’ (showing off) that showcased the stubbornness and audacity of our effort.

Then we created a Gaon Connection song—we call it a contemporary folk song (hear it on YouTube)—and gave it the vibe of a rural item number. It is played across villages on loudspeakers affixed to cycle rickshaws. We wrote and composed it ourselves, and since we could not afford a professional singer, I ended up singing it.

As you can see, all we have in our upstartish campaign is, well, nothing—except bloody good content. We promise readers a newspaper that can match the best, despite our meagre resources, and are trying to get better every week.

The 12-pager (e-paper available at www.gaonconnection.com) includes information about agriculture on a page called ‘Kheti Kisaani’, reportage from rural India on a page called ‘Badalta India’ (Changing India), a page on women called ‘Nari Diary’, two pages called ‘Baat Pate Ki’ with information on various issues, and a full-page photo essay on a theme. Our ‘Manoranjan’ (entertainment) page now features India’s homegrown comic book icons—Super Commando Dhruv, Doga and Nagraj—all under an association with Raj Comics, which supports our efforts by allowing Gaon Connection to use its content free of cost.

We have writers from different parts of India—from Etawah in UP to Ahmedabad, Delhi and Kishtwar in Jammu & Kashmir.

We are witnessing interest from people across the English-speaking corporate world. The media has pampered us with attention—everyone from Bloomberg to mainstream English papers to peer Hindi papers have written about us.

So what is our problem, then?

Our problem is that the newspaper industry bleeds cash, and bleeds fast. And we do not have the deep-pocket backing of an industrial house.

After I got my 50 per cent advance for my next Bollywood script, I transferred it to support Gaon Connection. My colleagues are transferring a part of their salaries. Many listeners of my radio show have contributed Rs 500-a-month to our crowdsourcing effort.

But we are obstinately trying to prove that newspapers can run on conviction and passion—and good content. (And hopefully soon, advertisements).

Who knows, we might just make it. Who knows, the sceptics who laughed us off might still have the last laugh. Every week, as the print deadline approaches, I feel I am standing again on the edge of that swimming pool in the British-era St Joseph’s College, afraid to go into the water, with my swimming teacher threatening to throw me into the deep end.

I don’t know how to swim, but I will learn.

Neelesh Misra is a radio storyteller, Hindi film scriptwriter and lyricist, author and founder of Gaon Connection, a rural newspaper