Gadkari is Not in the Race for the PM’s post, Just for the Record 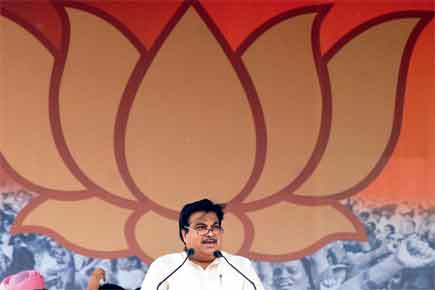 
NEW DELHI ~ The last time Bharatiya Janata Party (BJP) President Nitin Gadkari made headlines was when he inducted Bahujan Samaj Party (BSP) oustee and former cabinet minister in Mayawati’s government Babu Singh Kushwaha into the party in early January. While Mayawati had thrown out Kushwaha, a close confidant, from her party on the eve of the Uttar Pradesh Assembly elections to partially deflect the charges of corruption against her government, Gadkari picked up the BSP reject. Kushwaha was soon raided by the Central Bureau of Investigation for his alleged involvement in the National Rural Health Mission scam, and the BJP in general and Gadkari in particular had egg on their faces. Reactions to the move, within and outside his party, ranged from ridicule to outrage. The BJP itself had been raking up the National Rural Health Mission scam in UP all along. At the party’s last national executive meeting in New Delhi last year, Gadkari had specifically referred to the scam in UP. With one move from its president, the BJP suddenly seemed to have lost whatever ground it might have gained by backing the campaign against corruption started by Anna Hazare’s team. Gadkari’s move brought to naught the efforts of his own party colleagues—Sushma Swaraj and Arun Jaitley, leaders of the Opposition of the Lower and Upper Houses of Parliament.

Last Sunday, once again, Gadkari made headlines. This time round, by spelling out his support for Gujarat Chief Minister Narendra Modi for the post of future party president and BJP’s prime ministerial candidate. This is Gadkari’s last year in office. When the year 2012 ends, so will his presidency of the principal opposition party. For the record, Gadkari has said he is not seeking an extension as president. As it happens, this is something that his predecessor Rajnath Singh also used to say. The BJP’s party constitution would have to be amended for a president to seek any extension. Gadkari told a TV channel, “I will never be a candidate for PM, nor will I topple anybody. Modi has good potential to be BJP president and PM.” On the question of continuing as party president, he said, “I am ready to work as an ordinary party worker,” adding: “I will support Narendra Modi to take over the mantle.”

On the face of it, it is being made out that Gadkari is trying to win over Modi, who has been miffed with him after the induction of RSS appointee Sanjay Joshi back into the party. A day after he seemed to back Modi, Gadkari clarified that ‘Narendrabhai’s’ name figures in a list of five-six contenders for the top post.

The thing is, Gadkari is actually batting more for himself than he is for Modi. From being a non-player at the national scene, Gadkari became party president in December 2009 due to infighting in the party at the top. The RSS put the infighting to an end, installed one of its own men as president and ordered everyone to get back to work. Gadkari has privately confessed to many, including journalists, that he has the ‘blessings’ of the RSS not just as party president but even in the race for the party’s prime ministerial candidate. If the next Lok Sabha election sees a repeat of August 2009— when RSS Chief Mohan Bhagwat sat down with senior BJP leaders including LK Advani, Swaraj, Jaitley, Venkaiah Naidu, Ananth Kumar and MM Joshi to stop the bickering and forced Gadkari as party president down their throats—the BJP president could emerge as a probable for the PM’s post. Modi stayed away from the National Executive in Delhi last year to register his protest against Advani’s rath yatra and the party president’s inability to stop the veteran from embarking on yet another political journey. Though, for the record, Modi had explained it by saying he would not leave the seat of his navratri fast and step out of the state. While Modi prepares for the party PM probable’s slot with Sadbhavana fasts, Gadkari, too, is fasting these days. Not for religious, but for medical reasons, so he can be in better shape to run the race. After his bariatric surgery last year, he has shed some weight and plans to contest the next Lok Sabha election. Incidentally, he is among those who recently criticised Manmohan Singh for taking the country’s top post without winning an election.

Gadkari’s backing of Modi, too, is just posturing. What it really means is that the race for the position is open. Of course, this has led to others who think they are in the running for the PM’s post show up in Delhi. Madhya Pradesh Chief Minister Shivraj Singh Chouhan made a pit stop in the capital on his way to Uttar Pradesh for campaigning, and spoke to a few journalists about how efficient his government is. Chouhan recently passed a draconian law in Madhya Pradesh to check beef consumption that allows cases to be registered and violators to be booked on mere suspicion. In Delhi, Chouhan dubbed his state the epitome of communal harmony. “At the Chief Minister’s residence, we celebrate all religious festivals. There is Iftaar, Holi, Diwali, Sikh festivals at my house,” he said. Chauhan shared details of infrastructure development, scholarships for poor students and those from backward castes and classes, his grand plans for ending power shortages by 2013, and so on. “In 2001, there were 29 lakh children who should have been studying in schools, but were not. Today that number has come down to 43,000. We give scholarships to students from Class I so that poor people send their children to school,” he said. BJP insiders contend that Chouhan could emerge as another dark horse in the race for the party’s prime ministerial candidate. A senior government official accompanying him said private investors are lining up to put money in the state’s infrastructure. Chouhan is now trying to build the image of a chief minister committed to ‘development’, like Modi, as well as one committed to the welfare of the backward and poor that Bihar Chief Minister Nitish Kumar has based his politics on. To top it all, enforcing the Sangh’s agenda in the state gets him the RSS’s blessings that Gadkari hopes to fall back on. Clearly, then, the race is open and on. Gadkari won’t commit the mistake of being seen as bickering with others for the post. That the RSS doesn’t approve of such behaviour is a lesson he picked up when he became the BJP president by accident.