For direction, wait for the next Budget

On the whole, the Budget 2014 looks remarkably similar to what the UPA government may have presented if it had returned to power 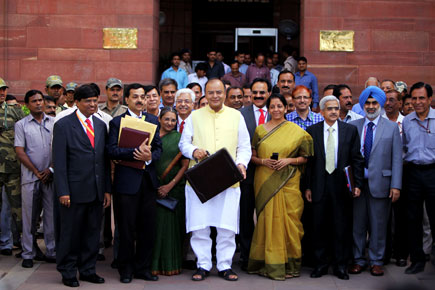 On the whole, the Budget 2014 looks remarkably similar to what the UPA government may have presented if it had returned to power

When a new government comes to power, there is always a keen anticipation on what the government will signal about its economic policies in its first budget. This is particularly the case with the current government for two reasons. Firstly, the Indian economy has been going through a slowdown over the past three years, with a rate of economic growth that has been the slowest in the past two decades. There is a sense that economic policy is in “paralysis” and that there needs to be a strong boost to reforms to get growth going. Secondly, with the strong performance in the 2014 General Elections, the BJP-led government has the mandate to make a new beginning in economic policy, charting out a course of action that can deliver sustained job, creating economic growth for the next five years. How has the budget done in these terms? Does it signal a brave new beginning? Are there signs that the BJP government will enact tough and politically challenging new reforms that can put India on to a new growth path?

The Economic Survey tabled in Parliament on July 9 showed that the economic situation, though bleak, is not as dire as it was in the aftermath of the Gulf Crisis and when the minority government of Prime Minister Narasimha Rao presented its landmark budget in 1991 which swept away many features of the command and control regime that existed at that time. For example, inflation showed signs of receding, and is likely to decline further. The fiscal deficit as a ratio of GDP has been contained at 4.5 per cent of GDP. The current account deficit is a mere 1.7 per cent of GDP. Foreign exchange reserves have increased from $292 billion in end Match 2013 to $302 billion to March-end of 2014. The rupee has stabilised after suffering a steep fall last year. All these indicators show that the government had a bit more breathing space than originally expected. At the same time, there are new risks – the potential emergence of El Nino and weaker-than expected monsoons on the climactic front, the possible increase in oil prices due to hostilities in Iraq, and the sharp increase in the non-performing assets of banks from 2.4 per cent of credit advanced in 2011 to 4.4 per cent in 2013.

So how bold and unconventional is the budget presented by the Finance Minister to the Parliament on Thursday?

In many respects, the Budget could be termed as “more of the same” variety, rather than a brave new beginning. As with the previous government, there was a stress on the provision of certain public goods such as schemes on water and sanitation, and low income housing, and programmes for the poor and the agriculturalists such as Pradhan Mantri Krishi Sichai Yojana. There were well-intentioned policy statements on carrying on with fiscal consolidation, with more emphasis on revenue raising and reduction of subsidies, and better targeting of anti-poverty programmes, with very little specific details on how this will be done.

On the whole, the budget looked remarkably similar to what the UPA government may have presented if it had returned to power. There are a few seemingly bold measures such as the increase in FDI limits to 49 per cent in defence and insurance, but even here, the constraint on not allowing foreign firms majority ownership in these sectors suggests that the change in the BJP’s conservative stance on FDI is more apparent than real. Infrastructure spending gets some boost in the Budget, but the increased emphasis on infrastructure spending was already evident in the last years of the UPA regime.

In sum, while the Budget can be considered to be politically non-controversial and would not stir up any hornet’s nest among vested interests in the next few months, it is disappointing that the BJP government has lost a historic opportunity to signal its intentions to bring about much needed institutional reforms that are essential for a growth strategy that is both inclusive and sustained. This play safe strategy is particularly striking, given the BJP’s majority in Parliament. Was it that the BJP government did not want to alienate any politically influential groups in the run-up to some important state elections? While we cannot say for certain, this does seem to be a possible interpretation. Perhaps one may have to wait till the next year’s Budget for a clear sense of direction from the current government, and we will know for certain then whether this government is incrementally or radically reformist.

(The author is Professor of Development Economics, University of Manchester)