Everybody Loves a Good Eclipse

The rare celestial event on 22 July, a total solar eclipse, is creating a flutter across the country among superstitious loonies and no-nonsense astronomers alike 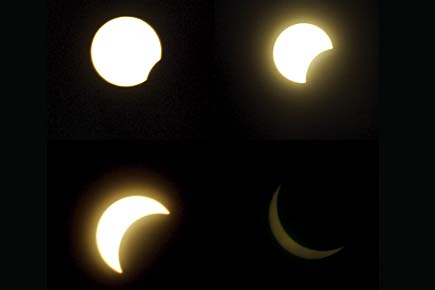 The rare celestial event on 22 July, a total solar eclipse, is creating a flutter across the country


The surreal spectacle of a total solar eclipse will be visible on 22 July to people and animals in India living along a narrow arc that stretches from the western end of the country to the eastern, from Surat to Patna. It will be the longest total solar eclipse of the 21st century—almost seven minutes in some regions. Those who are outside the geographical arc will have to be satisfied with a partial eclipse.

The impending eclipse means different things to different people. It’s a time for scientific enquiry and spiritual revelations. Mothers-in-law have decided to cage their pregnant daughters-in-law. Animal lovers contemplate blindfolding stray dogs. Many plan to stay off beaches because their inboxes are filling with rumours of an earthquake and a big tsunami on the eclipse day. No self-respecting doomsday could occur without a solar eclipse, it seems.

The global tourism industry and several governments are aggressively promoting the total solar eclipse as a festival of sorts. Being marketed as a rare celestial event, an opportunity that comes once in a lifetime, tourists are willing to shell out as much as Rs 79,000 to fly on a chartered flight and munch on breakfast while chasing the eclipse. For the first time in India, Cox and Kings, the travel company, has chartered a flight that allows passengers to view the solar eclipse across India, above the clouds. The eclipse flight will last three hours. It will take off from New Delhi and hover over Gaya in Bihar.

Astrophysicists, too, love the solar eclipse. It provides them with a natural laboratory to study the corona, the sun’s atmosphere. A team of Indian scientists will be conducting experiments at Anji, near Shanghai, because it has very good viewing conditions. The scientists here have under six minutes to make their observations. So they need the best possible location.

Dr Wahab Uddin, expedition leader, Aryabhatta Research Institute, Nainital, is in China already. “We are at the site of Jiangnan Tianchi Holiday Resort in the beautiful mountains at the height of 900 metres from mean sea level. It is a scenic tourist place situated near a water reservoir and surrounded by green bamboo forests, picnic spots, small observing telescopes, etcetera. The sky is dark blue, which is good for the solar eclipse observations. And there is a 50 per cent chance of a clear sky for the total solar eclipse.” His team is equipped with various instruments to image the corona, which has a temperature of a million Kelvin. “The million Kelvin hot solar corona above the comparatively cooler photosphere (sun’s surface, whose temperature is merely 6,000 Kelvin) is just like a warm kettle on the cold burner. [The mystery] poses a challenge to solar scientists. The total solar eclipse observations provide an opportunity to study solar coronal heating.”

They are also a good time to test out theories on plasma, says Dr Dipankar Banerjee from the Institute of Astrophysics, Bangalore. He is part of the team of Indian scientists in China. Most of the universe is in the plasma state, unlike the solid, liquid and gaseous states humans are accustomed to. Studying the corona during an eclipse is like studying plasma in a natural laboratory.

There are other type of researchers who are infatuated with the eclipse. DK Hari and his wife, Hema Hari, see a deeper meaning in the season’s triple eclipse (the solar eclipse is preceded and followed by lunar eclipses). They have written a book called, Will History Repeat Itself? And it is published by the Art of Living enterprise. The couple claims that similar triple eclipses had foreshadowed the battle of Kurukshetra and the submergence of Dwarka. The book also touches upon the possibilities of earthquakes, tsunamis and ethnic wars.

Anupama Sinha, a gynaecologist in Patna, is tired of debunking myths that propagate eclipses as a dangerous time for pregnant women. A time when expecting mums are forbidden to eat, or scratch their tummies lest it scar the baby, or cut vegetables as it could lead to babies with cleft palates and deformities. Sinha is tired of answering baseless questions from patients. And their mothers-in-law, who are tough to argue with.

All major temples will be closed during the solar eclipse in the ancient city of Varanasi, where the total eclipse will be visible. According to astrologers, a solar eclipse is considered a dangerous time, a phase when strange things happen. Yet, it is also exalted. “During the eclipse, any mantra that one chants will have four times the value,” says Prem Baba, a religious figure who lives in Patna.

Exalted or doomed, the solar eclipse has sure given the diamond city of Surat a reason to celebrate. Although the total eclipse will be visible here only for a little over three minutes, the city is all set to celebrate. The Surat Municipal Corporation, in association with other local bodies, has organised an array of contests, lectures and cultural events. There is even a website dedicated to the total solar eclipse in Surat. The municipality has made three outdoor arrangements for public viewing and intends to distribute 20,000 protective eye gears free of cost.