Everybody Loves a Bear Wrestler

Few forest officers have booked as many offenders as RS Kala has. Fewer still enjoy the local community support he does 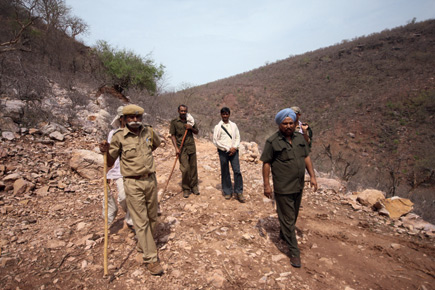 Few forest officers have booked as many offenders as RS Kala has. Fewer still enjoy the local community support he does


“Saab, a bear has entered the village!”

The July sun had already mellowed in Ranthambore tiger reserve. RS Kala was listening to the crackle of wireless sets at his range office in Faludi when the forest guard came running. It is not unusual for bears to step into villages in search of food. But an unpredictable animal with razor-sharp claws, it can be quite a handful when intimidated by a panicking crowd.

A few hundred metres from the range office, Kala met noisy villagers on a check dam adjacent Faludi village. The bear was nowhere in sight but every villager claimed to have spotted it just a few moments ago. A tall, hefty Sikh in his mid-50s, Kala waited on the raised structure, scanning the bushes nearby, his back to the small reservoir beyond which spanned the tiger forests.

Suddenly, the villagers scattered with a chorus of screams. From the corner of his eye, Kala saw a charging black mass of fur that, upon reaching him, stood tall on its hind legs and offered the dreaded hug few have survived without mutilation. But before the claws touched his throat or face, Kala managed the unthinkable.

“There was no time to think. I saw the arms (forelegs) and claws trying to grab me and quickly held the bear by both its wrists. After a few seconds, realising I was heavier, I pushed it down on the ground and dug my knees into its legs. Desperate, it stretched its neck and bit my arm,” Kala recalls after seven years, in his usual whispering tone, without a trace of excitement.

By now, his terror-struck audience was curious and had started inching forward to witness the wrestling match of a lifetime. Pinned to the ground, the bear was snapping away at Kala’s arm. In pain, he screamed for help. But nobody was ready to intervene. Several minutes passed before a temporary forest staff came forward and, following Kala’s instruction, grabbed the bear’s hind legs. Soon Kala was back on his feet, his grip intact. Like a piece of laundry, the bear was now hanging by its legs between the two men.

“One-two-three… we swung the bear to gain momentum and tossed it into the lake. It scampered across the water and vanished inside the forest.” Kala manages a smile for the first time, but only just. Overnight, his staff recall, the villagers started treating the ranger as a hero “nobody messes with”. Given the perennially hostile relations between forest staff and local communities, that was no less a miracle.

Seven years on, Kala has not changed but for a few extra kilos. Now in charge of the Khandar range, the Assistant Conservator of Forests still books the largest number of offenders and yet enjoys the support and trust of the locals. So far, he has taken 97 cases to court. When the land mafia targeted him for stopping encroachment, men from the traditional hunting communities stood by him, offering protection.

“It’s about fairness and justice. No one is denied his rights in my custody. I have never framed an innocent. Whenever wild animals attack… I reach the spot as soon as possible. When villagers are angry or have complaints, I hear them out,” Kala lists his “trade secrets”, thinking hard. “When we had funds, I organised vocational training for women. A hostel for village boys was started at my former range office. People value these small things. Today, nobody fights my staff. On the contrary, villagers provide me leads when someone breaks forest rules.”

He does not talk about his stint with Army intelligence but admits, with another rare smile, that the experience still helps him catch a lie during interrogations. The only time Kala sounds nostalgic is when he recalls “those three years” of driving the family’s trucks and making the “best money” of his life. In fact, he aborted his first stint in the forest department in the mid-80s just a year into it because he did not enjoy clerical social forestry work. He returned to the department in 1997 to join “the field of wildlife”.

“I enjoy the challenges of protection. When you know you have these many tigers in your area and you have to look after them, your job becomes result-oriented. You know when you succeed. My phone is switched on round the clock and my staff can be mobilised at all hours. What else is there in the life of a forest officer in a tiger reserve?” Kala answers the rhetorical poser himself with a nod.

For his distinctly low-profile approach, Kala has a fierce sense of self-respect that rarely endears him to his seniors. But he does not regret a few transfers and snubs he did not deserve. While almost everyone in Ranthambore claims to know a thing or two about the tiger, Kala rarely talks about his frequent encounters with the big cat. “He is like the SPG who never discuss the prime minister,” jokes a long-time colleague.

Instead, Kala often sleeps in his uniform. “Phone aa jaye toh bas joota pehno aur niklo (when the phone rings, all I have to do is slip on my shoes and rush),” Kala smiles for the third time. “A Sardar always looks fresh.”