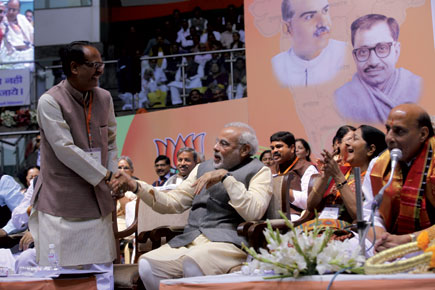 
As Narendra Modi continued his rise within the BJP hierarchy, returning to the party parliamentary board on his own terms with Amit Shah in tow, the two-time Madhya Pradesh Chief Minister Shivraj Singh Chouhan was mentioned only in passing. He is being seen as someone who has lost out and is being confined to a role in his own state. But Chouhan has been in this position before and he prefers that attention be directed elsewhere. He has always been underestimated and has usually used this to his advantage. His supporters within the party know this, but many who are ideologically opposed to the BJP focus on Modi without realising that Chouhan poses an equivalent and more persistent threat.

In 2003, the Congress, under two-time Chief Minister Digvijaya Singh, was badly defeated in the Madhya Pradesh Assembly polls. The BJP campaign then was led by Uma Bharati, who was seen as one of the leaders who would shape the party’s future while holding true to its core of militant Hindutva. She was an impressive public speaker with popular appeal. But as the party soon realised, the difference between a campaigner and an administrator is immense, and soon after, she had to be replaced. Babulal Gaur took over, but he didn’t last long either, and when Chouhan took over, not many took him seriously.

No BJP chief minister had before lasted a full term in MP, and Chouhan was seen as young and inexperienced. The term derisively used for him in much of the state—pappu—summed up the general impression. It was easy to forget that when he took over at the age of 46, he was already a five-time MP, having won his first Lok Sabha election in 1991.

The first year was tentative, and there was much talk of the power wielded by his wife, Sadhana Chouhan, in the administration. His wife’s name later cropped up in a case of personal corruption. It seemed that a month after taking over as CM, Chouhan had started doling out mining leases in Rewa district to JP Associates, which has a cement factory in the district. The JP Group then financed four heavy vehicles, got them registered in Sadhana’s name and took them from her on lease. The case dragged on—a closure report filed by the Lokayukta police was accepted by a special court and this decision was only recently upheld by the High Court.

Chouhan survived those early years and the case, and has gone on to consolidate his hold over the state BJP. He has run an administration that, at least in comparison with the hyped tenure of Digvijaya Singh, has been better perceived in the state. He has done so quietly, without the mercurial behaviour of an Uma Bharti or the hype that surrounds Modi.

At the same time, the mandatory performance of surya namaskar in schools and the teaching of the Gita as part of the curriculum only point to his larger vision, which endorses much of what the Sangh wants done in the state. Senior RSS men are involved in every aspect of the administration and are consulted on all senior appointments and postings. I heard him speak in Vidisha well before he became Chief Minister. He was accompanying Praveen Togadia, but Chouhan’s speech made Togadia appear tame. If he is still projected as a moderate, it is because of a pliable Bhopal media, controlled as much through the selective release of government advertisements as through personal predilections. The state correspondent of a national daily was recently seen touching RSS Chief Mohan Bhagwat’s feet at a public gathering.

In power, Chouhan has toned this rhetoric down, but in his personal beliefs he is as much of a Hindutva hardliner as Uma Bharati or Modi, and enjoys the RSS’s confidence far more than those two. This is because at heart he is a Sangh man, comfortable with its strict hierarchy and its commitment to organisational discipline. He is not given to the cult of personality that Modi so relishes.

Modi’s rise in the party has already earned him a number of enemies. Modi is no Uma Bharati—he is neither as mercurial in public, nor is he likely to offer a birthday cake to Hanuman in public—but he arouses much the same sentiment in his opponents within the party. Senior leaders do not trust him; many fear him while the RSS puts up with him despite all that he has done to destroy the organisation’s influence in Gujarat.

If Modi ever heads a government at the Centre, his arrogance, his authoritarian ways, his inability to brook opposition or devolve responsibility are likely to create the same kind of crisis that Uma Bharati managed to foment in Madhya Pradesh. It is then—and many senior leaders in the party as well as the RSS anticipate this—that Chouhan will come into his own.