Devil’s Own Country for Women

Kerala’s men are turning moral policemen. Couples are interrogated by random strangers, even beaten up and arrested 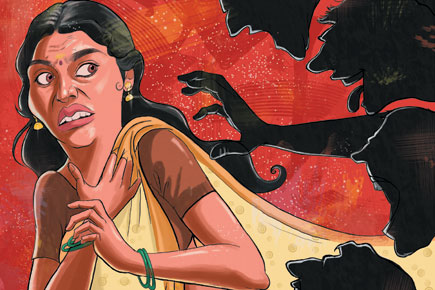 Kerala’s men are turning moral policemen. Couples are interrogated by random strangers, even beaten up and arrested


On 19 June, Thesni Bhanu, an infotech professional, was on her way to work at Kochi’s Info Park, riding pillion with a male friend on his motorcycle. They stopped at Kakanadu, a small town en route. Thesni stood near the bike while he went to get a cigarette. Out of the blue, a group of about half-a-dozen men charged up to her, and started making pointed queries along the lines of ‘Who are you?’ and ‘Where are you from?’ Since it was none of their business, Thesni ignored them. The men, clearly drunk, started using swear words. When she retorted in kind, one man slapped her and twisted her arms, as two others cheered. She fell to the ground, twisting her neck badly. When her friend returned from the nearby shop, he too found himself at the receiving end of an ugly interrogation.

Seizing a moment, Thesni rang the police. They arrived in about 15 minutes, but would not register a case. Her neck was aching, and it was only after she was admitted to hospital the next day and the assault caught media attention that the police top brass took notice. Once the case was logged, 72 hours after the incident, three of the men were arrested. But Thesni is far from reassured of her safety. “If a woman travels with a male friend in Kerala, she will be manhandled,” she says, outlining the problem, “If we travel alone, we will be sexually attacked, probably by the same moral brigade that cannot stand us travelling with males.”

Men in Kerala appear over-concerned about what women do, how they turn up in public—with whom, how, and when. To fall in love is almost seen as a crime in the state now. Public spaces are being fumigated, so to speak, to protect society from such dangers as public displays of affection. A couple sitting together in a park or on a beach can expect to be roughed up by strangers, some of them in police uniform. Meanwhile, cases of sexual harassment, molestation and rape have reached levels never seen before. Newspapers regularly report minor girls being abducted for sex slavery and daughters being sold into the trade by their own fathers. Things are so bad that everyday life for women is turning into a nightmare. Take just the last month or so.

On 19 July, Premjith, an art director, was at home in Thiruvananthapuram with his girlfriend, when there was a knock on the door of his flat. There stood a group of men who introduced themselves as workers of the DYFI, the youth wing of the CPM. One of them was a panchayat member. They had come for fund collection. But when Premjith went back in to get some money, the group followed him uninvited, and asked who the girl was. A friend and teacher at a nearby school, said Premjith. Unsatisfied with this introduction, they subjected him to a loud harangue on his alleged lack of morality, before beating him up.

The ordeal didn’t end there. They called the police, who took the couple to the station for further humiliation. The sub-inspector used abusive language and called their parents. Ignoring his girlfriend’s frantic pleas, he also called up her school authorities to verify her identity. Premjith is 32 years old, and his girlfriend, 28. But the cops insisted they  could be released only after their parents turned up.

Something just as shocking happened two weeks later in Kottayam district. Friends of Syam Nair, a government employee in Kottayam, received an SOS call from him on a Sunday evening. The police had caught him for ‘immoral trafficking’ at home. Two male friends and three female friends had gathered at his place to catch up over some snacks and drinks. At 4 pm, a police jeep barged into his compound, and six energetic cops jumped out to cordon off the house as if it were a terrorist hideout.

Syam and friends were psyched by the intrusion, but the cops insisted they’d been tipped off about sex trafficking at his residence. So each of them was taken aside and questioned alone to check how well s/he knew the rest. The cops failed to gather any evidence of the aforesaid sexual offence, but once they discovered that one of the women was Syam’s live-in girlfriend, their cheesy expressions returned. Triumphant, the sub-inspector threatened to arrest them for staying together, and issued the girlfriend an ultimatum to move out.

The cops backed off only after Syam’s friends called up the circle inspector and demanded to know what law barred a man and woman from staying together. “The irony,” says Syam, “is that this is the same society where a person hit by a vehicle lies on the road unattended for hours because the general tendency is to avoid the trouble of carrying an accident victim to hospital.”

The scenario is so bad that even families travelling together risk being assaulted by overzealous moral policemen. On 4 August, Vijesh Vijay, an infotech professional in Thiruvananthapuram, was driving to a relative’s house with his wife and mother-in-law. A group of men stopped him and accused him of sex trafficking. When he said the women were part of his family, they demanded a marriage certificate. To his horror, they even asked him to turn the women over once he had ‘finished’ with his ‘need’ (sic). “They introduced themselves as policemen,” recounts Vijay, “One of them grabbed my collar and started talking in a crass manner. I grew suspicious and tried calling the police. They would not let me, but still [succeeded somehow].” The police arrested the men.

Four days later, another case made the newspapers. A man and woman travelling in a state transport bus in Idukki district were intercepted by the Kerala Police at Ponkunnam and detained for interrogation. A fellow passenger—a personal assistant to a former legislator, no less—had called the police to say that two youngsters on the bus looked like eloping lovers. To nail the offenders, an on-the-spot interrogation was conducted by the cops, followed by calls to the detainees’ relatives to cross-check what they were saying. The elopers were found to be siblings, returning home after some work at the university in neighbouring Kottayam district.

Online harassment can be a menace too, but enduring primitive police attitudes can be worse. Consider Reena Philip’s case. An activist of the CPI-ML (Red Flag) and also a research scholar at University of Kerala pursuing a PhD on the ‘Impact of Globalisation on Education’, Reena was invited on Facebook to a chat by a man. When she replied that she was not interested, he let loose a barrage of obscenity online. Offended, Reena complained to the police’s cybercell. The deputy superintendent advised her not to put up photos on Facebook, since this could provoke men, and then officiously compared her stance to that of a sex-worker who places money in her blouse for the police to grab. Sickened by this, Reena approached the Director General of Police with a complaint against this obnoxious man in uniform (a probe has been ordered).

Moral policing in Kerala is distinct from what is seen elsewhere in India. For one, it is not right-wing extremists (of the Sree Ram Sene sort) who are out to impose their own code of morality on others, it is sometimes workers of the state’s Left parties. For another, it has its origin in a crisis of gender relations all of Kerala’s own. “Something is seriously wrong with the Malayalee man, especially in the 30–60 age group,” believes KP Aravindan, a doctor and social activist, “Simply put, the Malayalee male is sexually repressed. Schools are segregated as nowhere else. This segregation prevents natural friendships between boys and girls. During the period of sexual awakening and beyond, they see each other only as sex objects.”

There are many colleges, even state-run institutions, that ban T-shirts and tight pants worn by girls. “But the sexual aggression that women in Kerala face is not addressed by these so-called ‘legitimate’ acts of moral policing in academic and other institutions,” says T Muraleedharan, a teacher at a private college in Thrissur who believes that a strict dress code only victimises women more by shrinking their choices. “In my college, a ban has been imposed on T-shirts and tight pants with the wholehearted support of 80 per cent of the staff,” adds the teacher, “Girls and boys talking for an ‘unnaturally long’ time are also monitored. They are told that if they do not stop, their parents would be summoned.”

The same attitude is evident in a recent ban imposed on filmi dance in schools. “The thought behind the Kerala government’s ban is quite like that behind honour killings. It is an anxiety over ‘our’ children going bad that might come to shame ‘us’,” says AS Ajith Kumar, a musician and Dalit rights activist in Thiruvananthapuram.

Kerala’s political culture has plenty to do with the social (if not legal) criminalisation of behaviour that conservatives consider taboo, even if nobody’s rights are violated by it. Consider the scandals that have stormed Kerala politics of late. Gopi Kottamurikal, the CPM’s Ernakulum district unit secretary, was forced out of his post on allegations of having been seen with a female comrade in a ‘compromising position’ at the party office. A loyalist of VS Achuthanandan, he had switched sides to the Pinarayi Vijayan faction, and that was enough for his former fellow factionalists to use a spy camera in the office to gather evidence against his moral stature. Immediate suspension was the only option for the state committee. “Otherwise that video would have been playing on the internet,” says a state committee member close to Vijayan. It did not matter that two grown-ups engaged in a consensual act injures nobody else and is not a crime.

In another incident, PJ Joseph, the state’s minister for water resources and chairman of the Kerala Congress (J), was caught in a controversy after a woman complained that she had been getting unwelcome SMSes from the minister’s phone. The counter-allegation was that PC George, a fellow leader of the party and its chief whip in the Assembly, had framed Joseph in connivance with the woman’s husband. The story took another turn later, with the woman complaining about her husband having hidden facts about his first marriage.

Unfortunately for Kerala, moral policing is still testing new limits of absurdity. In Thrissur district, a police officer recently implemented a ban of his own on low-waist jeans. He sent the police out to patrol the streets near colleges. Obedient cops that they were, they nabbed men clad in such dangerous denim. Why were no girls hauled up? Elementary. Because in Kerala’s small towns, they are yet to start wearing low-waist jeans. Given the social scenario, it would be the devil’s own advice.