Senior leaders offer different arguments for and against Telengana, but remain worried about the irreparable damage done to the party in the state 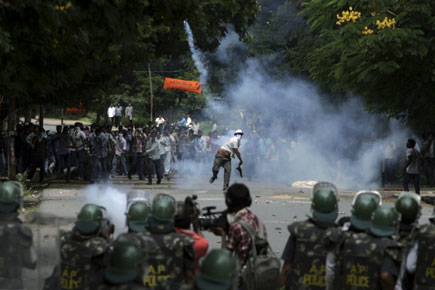 Senior leaders offer different arguments for and against Telengana, but remain worried about the irreparable damage done to the party in the state


Despite the years of discussions and dithering that have pushed Telangana to the brink, the Congress remains a divided house with most of the party leaders in the Capital still trying to estimate the extent of damage the current crisis may inflict on their prospects in the general elections of 2014. This is at a time when the political climate in Andhra Pradesh—which provided a significant number of MPs to the party in the last two general elections—has reached boiling point, both in the area demanding separate statehood as well as in the rest of the state.

The divergent voices that one hears from senior functionaries—all talking off the record—at party headquarters in New Delhi symbolise the frustration within the Congress as it tries to wriggle out of a mess partially of its own creation in its erstwhile stronghold. The bind is so real that the divergent positions—one supporting the formation of Telangana and the other opposing it—have become extremely rigid.

Andhra Pradesh has acted as the powerhouse for the Congress in the last two Lok Sabha polls and one of the prominent factors for the party being able to cobble up a ruling formation at the Centre. In the 2004 elections, the Congress won 29 out of 42 Lok Sabha seats in the state while the Telangana Rashtra Samithi (TRS), which at that time was its ally, won five seats. In the 2009 general elections, the Congress improved its tally even further, cornering 33 Lok Sabha seats, thus routing all its rivals in Andhra Pradesh and helping the party cross the 200-mark in the country as a whole.

Over the past few years, however, the Congress—partly due to the mishandling of the Telangana issue and partly because of its failure to ensure a smooth succession following the demise of Chief Minister YS Rajasekhar Reddy—has made itself almost irrelevant in the state. So acute is the crisis in Andhra Pradesh that in the by-elections held in 18 Assembly seats and one Lok Sabha seat last year, Jaganmohan Reddy completely decimated the ruling Congress. Riding a strong sympathy wave and fighting a bitter public battle with the Congress over his father’s political legacy, the Kadapa MP’s nascent YSR Congress bagged 15 of the 18 Assembly seats and the sole Lok Sabha seat in a showing that is still being hailed as a political gamechanger in the state.

Despite this decay in the party standing, those in favour of creating Telangana sooner than later argue that a decision for separate statehood would help the Congress win over TRS, and together they could minimise the loss in the region in the 2014 polls. As for the coastal Andhra and Rayalseema areas, they further argue, a tacit understanding with Jaganmohan Reddy—by adopting a lenient approach in the ongoing cases—would do the miracle ahead of the next general elections. This would, they maintain, not only prevent Reddy from gravitating to the BJP, but would also keep a window open for the two sides to negotiate after the elections. The possible loss of seats in Andhra Pradesh by the Congress—a possibility that no one rules out—may thus be compensated by new alliances with prospective gainers in the state, even if the tie-up comes to the fore after the elections.

“Sonia Gandhi,” says a senior leader from Telangana, “was never given the true picture by certain influential leaders in the party. Despite the mess, there are still ways to maintain the number (of Lok Sabha members) in the state from the party. It may not be possible directly, but it is not impossible indirectly, provided the party takes credit for creating Telangana and helping Jaganmohan get out of jail.”

These leaders argue that in addition to compensating for the loss the Congress is likely to suffer in Andhra Pradesh in the next general elections, a decision to create the separate state of Telangana would also prevent the short-term crisis looming over the Manmohan Singh government following the resignation threat by seven Congress MPs from the region.

But partly because of the pathetic state of the party’s affairs in Andhra Pradesh, Congress leaders opposed to Telangana insist that the damage caused in the state is irreparable in the short run and even the formation of a separate state would not be able to help the party regain lost ground, directly or indirectly.

The decision, instead of helping the party improve its position in the state, would rather lead to the eruption of new trouble spots in other parts of the country.

“A decision to grant statehood to Telangana would immediately ignite statehood demands across the country,” says another senior Congress leader, referring to Gorkhaland in West Bengal and Bodoland in Assam. He also points to some other demands for statehood, particularly those of the tribals of Assam and Andhra Pradesh.

In addition, the party’s anti-Telangana group argues, the bifurcation of Andhra Pradesh is bound to encourage the division of Uttar Pradesh. At the fag-end of her tenure as Chief Minister of Uttar Pradesh, Mayawati had got a resolution passed in the Assembly to split the state into four parts. “Mayawati would waste no time in taking this up and making it a major issue in the general elections,” says the Congress leader, adding that such a decision would also hamper the peace process in Nagaland where the Centre’s negotiatons with the NSCN (I-M) are at an advanced stage.

This section of the leadership also points out that the formation of Telangana may well remove the resignation threat held out by party MPs from the region, but it would trigger a similar and much more widespread response from MPs belonging to coastal Andhra and Rayalseema, thus worsening the crisis for the party at the Centre.

The anti-Telangana lobby in the Congress, therefore, suggests a two-pronged action to thwart any fresh upheavals at a time when the UPA government has entered its last leg. They argue that changing the Chief Minister in Andhra Pradesh and creating an autonomous council of Telangana would be the best solution.

In fact, the demand to change the Chief Minister has been gaining strength ever since Kiran Kumar Reddy assumed office in late 2010. About a month ago, when Reddy had to make several trips to New Delhi, it was openly speculated that his days in office were numbered. Reddy, who succeeded K Rosaiah, is being seen as a weak administrator, unable to check the party’s slide in Andhra Pradesh. The anti-Telangana lobby feels that at least some of the lost ground could be salvaged with a change in the leadership in Andhra Pradesh. This lobby also insists that anything more than an autonomous council for Telangana would kick-start a counter wave of protests in the rest of Andhra Pradesh.

An autonomous council is one of the six options recommended by Justice Srikrishna committee which, after about 11 months of consultations in the state, had submitted its two-volume 461-page report in January 2011. Among the options to keep the state united, the committee has suggested that there should simultaneously be provisions for certain constitutional and statutory measures for socio-economic development and political empowerment of the Telangana region through the creation of a statutorily empowered Telangana Regional Council.

A delegation of ministers, legislators and MPs from Rayalseema and coastal Andhra region, currently camping in New Delhi, has also warned the Centre of a violent backlash in the rest of Andhra if it decides to bifurcate the state. “If the Centre decides in favour of splitting the state, we will resign en masse from our posts,” the Infrastructure and Investments Minister of Andhra Pradesh, G Srinivas Rao, recently told mediapersons in the capital.

Vehement as the two sides are in pushing their case, no one is sure that anything the party does can help it repeat the performance in the past two general elections. Meanwhile the arguments continue as Telangana burns again.