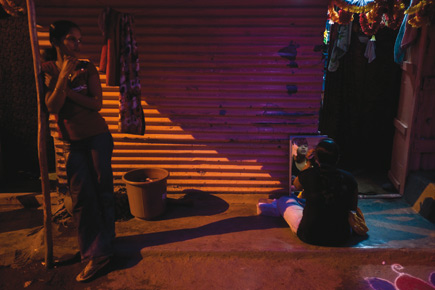 
Brothels are dirty places. In Kamathipura, India’s most famous red light area, you will find torn condoms and gutka packets strewn around, paint peeling off damp walls, and posters of C-grade films ripped strategically at the breast or crotch of the actress. There are few condom-vending machines. Then you notice the women—cigarettes dangling from their betel-red lips or between thin fingers with long nails, midriffs exposed, chests protruding from tiny blouses, and a blazing arrogance writ large on their faces. In the brothels of Kolhapur, pigs and women dot the periphery of the road; the pigs scout through the drains, the women scout for customers.

Sangli is clean. It begins with the railway station, which has been awarded the second cleanest station’s title in Maharashtra. A five-minute auto-rickshaw ride takes you to Dusshera Chowk. Through clean roads canopied by huge trees, you arrive at a small junction. A clean swept road from there leads to Sangli’s red light area. Pink doors on pink walls flank the street. There are no open drains with floating condoms in them. A decorative rangoli adorns the doorstep of every house. A few young girls stand next to a door, waiting for customers. Most others are busy with the chores that keep any housewife busy every morning—washing utensils and clothes, running after children, cooking meals, and taking dried clothes off the clothesline. Another lot are languidly grooming themselves—some women are combing their hair, some are painting their nails, and some are pouting their lips with a tiny mirror in one hand and lipstick in the other.

Until about 20 years ago, most people in this place walked with hands covering their nose and mouth. Today, there is a general aura of calm.

A deep female baritone rings out from behind one of the lattice windows. There are a few sandals outside the door. You take yours off,  notice the walls covered with portraits of young girls, and then your eyes move left towards the source of the voice. Her stout body sitting on the bed takes most of the space, with a hand rubbing her knee. A frail boy sits next to her, oscillating between reading a book with pictures and watching a dance show on TV. The lady signals a plastic chair to be brought, and, after the pleasantries, a girl wearing a neatly pinned sari brings in tea. “She is my daughter. I have so many daughters here. Rafiq is my only son,” says Bandawa Madam alias Amirbi Sikander Sheikh, rubbing the boy’s head. The girl standing with the tea tray beams. Another girl comes to greet me with a namaste, while two others peep in from the door.

Suddenly, Rafiq gets up and runs out with his book, calling out another boy’s name. And then Madam says quickly, “His mother died of AIDS. She hardly used the condom, despite my telling her repeatedly. Then he was born, and he had AIDS too. I send him to school but haven’t told the teachers yet. But I do not want any more AIDS in Dusshera Chowk.” The end of the sentence is almost a growl. “Today, my girls will refuse any customer who will not wear a condom.”

Two decades ago, when Madam was just 18, she eloped with a boy, but he was too scared to marry her. She couldn’t go back to her parents and so she decided to stay on in Dusshera Chowk, doing sundry jobs. Eventually, she became a sex worker. Seven years into the business, she saw contemporaries suddenly falling ill, developing blisters in their mouth and on their tongue, and then becoming just a memory sooner than expected. “The fat girls suddenly became sticks. Then someone said it was AIDS. We had never heard of it before. We never thought that our work could kill us,” she says.

She began to work with Sangram, an organisation in Sangli promoting awareness about HIV and AIDS. That’s where she first encountered the condom. “I thought ‘What kind of weird sticky rubber is this?’ But then, since we were getting it free, I decided to try it,” she says, “I eventually understood that it was for my protection as a sex worker.”

She took it upon herself to teach other girls how to use condoms. And also the customers who strode in. “Sex workers saw condoms as a hurdle not just to the sexual act, but to their business,” she says, “The girls would argue that asking the man to wear a condom was as good as showing him the door and not earning anything. They thought that the pleasure of sex would be lost if a condom was worn.”

Since most of the girls were from next-door Karnataka, they spoke only Kannada. Talking about condoms in Marathi or broken-Kannada was not really helping her get the message across to other sex workers. So she had an innovative idea.

“I bought two huge plastic buckets and put them in an intersection of the lanes. I told the girls to throw used condoms into the buckets. Around midnight, I would ask the girls about the number of customers they’d had. Then, I would thrust my hand into the bins, pull out the used condoms, and count them. If it did not tally with the number the girls had told me, it meant someone did not get her customer to use a condom. I just had to call out once, and the errant girl would apologise. If they address me as ‘Maa’, then I have every right to scold them.” She is the boss of about 200 girls now, most of whom are from Karnataka’s Devdasi tradition, with tiny white beads on a red cord around their necks identifying their lineage.

Madam’s efforts took three years to come good. Today, none of the women will ‘bithao’ (seat—for sex) a customer who refuses to wear a condom. But are the men willing to oblige? “Not if they are very drunk,” says Madam. So she does what a good mother will do for her daughters—she screens the customers. By 6 pm, Madam settles herself under a big tree at the entrance of her territory. Every prospective customer has to pass her screening—essentially, an assessment of his level of inebriation. “No man comes to a brothel unless he has had some alcohol,” she says, “I look at a man and I can tell how drunk he is. If he is too drunk, then obviously he won’t be able to wear the condom. Then I send him back, even if that means shouting and pushing him away. For the rest, I ask if they are carrying condoms, though my girls are well stocked in any case.”

Many a times, girls have had to show the door to rich customers who try offering more money for condomless sex. “My man asks me, ‘Why do I have to wear the condom even after being with you for so many years? Don’t you trust me?’ I say that this is the way it needs to be, because I do not want him to bring in diseases from his wife,” she says.

At some point, Bandawa split from Sangram. “I am my own boss; I didn’t like being instructed on how to do work anymore,” she says. In 2004, she started the Vaishya Mahila AIDS Nirmulan Kendra, and had it registered two years ago. She doesn’t reveal how large her family is, or how many condoms are found in the bins every night. “There was once a raid in 2007 because cops thought we had minor girls here,” she says, “Several of my girls were in jail and their children were hungry. I had to sit on a fast until the girls were released. Society will not remove poverty, but when we want to earn a living, they say we are bad.”

Over at Sangram, Bandawa is no longer a popular figure. Meena Seshu, director of Sangram, calls her a publicity hound. “She wants to hog the limelight, and is way too friendly with the cops,” says Seshu, “She wants to be a domineering force among her girls, and keeps saying that Dusshera Chowk is the only clean brothel in Sangli. But she forgets that it was Sangram, 20 years ago, which undertook the work of communicating with the girls of Gokul Nagar—the other brothel in Sangli—to ensure cleanliness and hygiene. We get 350,000 free condoms a month from the government, but Bandawa also gets her girls to sell condoms to customers. That is strictly against the principles of Sangram.”

What no one disputes, however, is that Bandawa is committed to her girls. She is also, in her own little way, trying to give her sex workers a measure of literacy. The effort began with the girls asking her to teach them how to identify the buses they would take to their hometowns in Karnataka. For about three years now, 10 sex workers have been teaching about 50 of their illiterate sisters to read and write. From 4 pm to 6 pm daily, they use a backboard outside a tea stall to impart maths and alphabet lessons. “The girls can now read bus destinations and do a little maths,” says Madam, “But I want them to learn how to speak English.”

Apart from this monthly fee, the girls shell out Rs 20-25 every Diwali season to give their tiny home-cum-workplace a facelift. “I get all the houses painted pink at Diwali. Why shouldn’t we?” says Madam, “The whole world looks down upon sex workers, although sex is such a basic thing. People see such violence against women, they see them raped, but society doesn’t want to help girls who come here out of poverty.”

Inside the rooms, the curtains are colourful and frilly, the bedsheets clean, and the walls plastered with posters of Bollywood actors and actresses. Ornate photo frames hold photographs of the girls’ families or of them in pleasant poses. Sharing space with shining steel utensils are bottles of nail polish, lipstick, bangles, packs of bindis, combs and mirrors. The cement floor is shiny and smooth. Every morning, the entrance to their house is swept, and water is thrown to settle the dust before white rangoli floor patterns are made outside the door. Some are simple designs with dots, others are elaborate. The white particles merge with the dried dust by late noon, when the girls begin to head out for school.

Quite a few women in Dusshera Chowk can read and write today. They send their children to schools in the vicinity. Geeta Osmani’s seven-year-old daughter studies in a Kannada-medium school. Geeta was a Devdasi who came to Dusshera Chowk when she was 18 and illiterate. “After having worked for 11 years here, I have made enough money to educate my daughter,” says Geeta, who likes to watch her doing homework, “She needs to study her mother tongue, and so I have enrolled her in a Kannada-medium school. Next year, I will send her back to my village to complete her studies. We women are happy here, but I want her to be as far away from my place of work as possible.”

It’s time for me to leave. I thank Madam, and she asks me to come again. And then, for the first time, her voice turns mellow: “I want to start a playschool for the smaller children. Can you get some help for the children?”