Collapse of a Good Track Record

Sreedharan’s resignation seems like a gimmick to shrug criticism 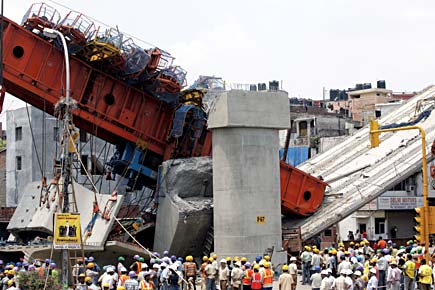 Such is the goodwill for the DMRC that despite a string of accidents, the project is chugging along


When on Sunday, 12 July, an accident at a Delhi Metro construction site killed six, shares of the contractor Gammon India fell by nearly 18 per cent. On Tuesday, despite a falling market, the shares seemed to rise again. There’s a sense that this was a passing aberration. Such is the goodwill for the Delhi Metro Rail Corporation (DMRC) that despite a string of accidents, the project is chugging along.

Reports of a crack in a pillar at the accident site were already submitted at Metro Bhavan. So, even if Gammon India is at fault, it’s clear DMRC knew about the crack and did nothing. This raises apprehensions in the minds of lakhs of future commuters about the safety of the Metro even after it starts on these new lines.
To make it worse, efforts to clear the debris resulted in another accident, injuring another five workers. The second accident wouldn’t have happened if the four cranes had moved together.

It’s not as if this was unprecedented: in October 2008, a similar accident had taken place in East Delhi. There, too, an under-construction flyover crashed, two died but many more would have if it had happened during peak-hour traffic. Consider what the Metro did then: it found the contractor, Afcons, negligent and ‘blacklisted’ it. Read the fine print and you will see that it blacklisted Afcons only for a year, and even during this period, it was not ejected from two other sites. What message does that send out to the Metro’s 499-odd other contractors? That you can get away with negligence?

As for the Metro’s own procedures of supervising construction work, doing safety audits and learning the right lessons to prevent future accidents, we haven’t heard much. If these had been done, another accident, this time more fatal, could have been prevented.

Lately, the Metro has clearly not been living up to the standards it made Delhi and the world believe it was setting for everyone. Which is why it is a little odd for DMRC’s famed chief, E Sreedharan, to announce his resignation. Sreedharan no doubt introduced a work culture hitherto unknown in government. But the public accolades and media hype have made him into a larger-than-life figure. The government obviously makes him stay back, but it leaves a sense that this was just a gimmick to shrug off criticism.

Government and non-government organisations, conservationists and associations of residents alike have found the DMRC to possess a carte blanche in whatever it does. It has delivered the great Metro to our delight, but has the Metro become completely unaccountable, a child spoilt by our uncritical adulation?