Charge of the Youth Brigade 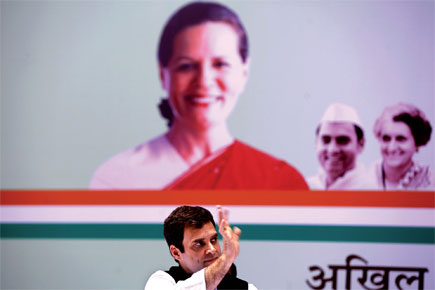 Of all the arguments spouted by the Congress for its decision to send Digvijaya Singh to the Rajya Sabha, there is one that offers signs of a generational change taking place within the party’s leadership rather seamlessly.

Singh had announced—after his 10-year-long self-imposed exile from elections drew to an end in 2013—that he would contest the 2014 Lok Sabha polls, a move that would never have allowed Jyotiraditya Scindia, the party’s youthful face in Madhya Pradesh, to hold firm ground in the state.

Sources say that the decision to nominate the AICC general secretary and former Madhya Pradesh Chief Minister to the Rajya Sabha is aimed at diffusing that danger, thereby ensuring Scindia-centric politics in the state. “By sending him to the Rajya Sabha, the party has ensured that he will be away from active politics in Madhya Pradesh for the next six years,” says a Congress leader.

Simultaneously, the move has ensured that the party benefits from the heat Singh radiates. “By freeing him from Lok Sabha polls, the party wants him to focus on his responsibility as the functionary in charge of the key states of Andhra Pradesh and Karnataka. He may also be of great use in minority-dominated seats outside Madhya Pradesh for his anti-RSS image,” says the Congress leader.

This is, say party insiders, exactly how Rahul wants to go about a generational change in the leadership—by bringing young leaders to the fore and securing advisory positions for the old guard.

This silent shift also helps explain why Kumari Selja, a four-time MP from Ambala and a prominent Dalit face of the party in Haryana, has been sent to the Rajya Sabha. Selja is a well-known detractor of Haryana Chief Minister Bhupinder Singh Hooda. Her nomination to the Upper House, despite the Jat veteran’s opposition, is being read as a snub to Hooda in party circles. The latter had been pushing for his candidate, PCC chief Phool Chand Mulana, also a Dalit like Selja, for that Rajya Sabha seat from Haryana. Sources indicate that 51-year-old Selja, a Gandhi family loyalist, is set to be made either the AICC general secretary or Haryana Pradesh Congress Committee chief before the General Election scheduled in April-May this year. “Not only has she been drafted for party work ahead of the Lok Sabha elections,” says a Congress leader, “but she will also be playing a larger role in the Assembly elections in Haryana to be held later this year.”

Taken together, the two decisions amount to a big change. This is especially so since they come in the aftermath of some significant steps by Rahul Gandhi to effect a generational change in the state-level leadership of the party.

Spurred by the party’s massive rout in the recently-held Assembly elections in the states of Delhi, Rajasthan, Madhya Pradesh and Chhattisgarh, the Congress acted swiftly and changed its PCC chiefs of all four states. The changes mark generational shifts in the politics of all these states. While Union Minister Sachin Pilot was appointed Congress chief in Rajasthan, party MP Arun Yadav was made PCC president of Madhya Pradesh, Arvinder Singh Lovely was put in charge of the Delhi Congress and Bhupesh Baghel was appointed the Congress chief of Chhattisgarh. All the new appointees are young faces of the party in their respective states—52-year-old Baghel is the eldest of them—and they have clearly replaced the old guard in the party.

Sachin Pilot, 36, has replaced Dr Chandrabhan, who was defeated in the Assembly polls in Rajasthan and is in his sixties. Arun Yadav, who replaced the 60-something former tribal affairs minister Kantilal Bhuria in Madhya Pradesh, is in his late thirties. Arvinder Singh Lovely, the party’s youthful face in Delhi, replaced the septuagenarian Jai Prakash. Baghel, who replaced Dr Charan Das Mahant, 60, in Chhattisgarh, is known as an aggressive mobiliser. All the new PCC chiefs are considered close to Rahul Gandhi. Since the appointment of these young faces as PCC chiefs is in line with Rahul’s long-term plans to rebuild the party in the four states, these leaders are expected to work in their respective states for long stints.

In fact, the debacle in the recent Assembly polls seems to have accelerated the pace of generational change in the party. Earlier, the party’s moves had been rather slow. In March last year, the party had effected a similar generational shift in its Punjab unit, when Capt Amarinder Singh, 71, was removed from the post of state PCC president and replaced by 55-year-old Gurdaspur MP Partap Singh Bajwa. In 2009, just ahead of Lok Sabha polls, Bajwa, then a sitting MLA, had been picked up to challenge sitting three-time BJP MP Vinod Khanna from Gurdaspur, and Bajwa had won the election.

One month later, the Congress appointed a young Dalit leader, Ashok Choudhary, considered close to Rahul Gandhi, as its new PCC chief in Bihar. The post in the state had been lying vacant for two-and-a-half years. Choudhary, 43, belongs to the Mahadalit community, a subgroup among Dalits whom the ruling JD-U has been wooing in the state. Between 2000 and 2005, he was a minister in the Rashtriya Janata Dal-Congress alliance government in Bihar.

Sources say the pace that this process has assumed following the party’s rout in recently held polls is unlikely to be disturbed in the days to come. In Haryana, for example, PCC chief Mulana is set to be replaced; the front-runners for this post are Kumari Selja and 37-year-old Ashok Tanwar, another promising Dalit leader in the party. Similarly, in Gujarat, Arjun Modhwadia’s days as the state PCC chief are said to be numbered. Here, Shaktisinh Gohil, an associate of Rahul Gandhi, has already become the face of the party’s state unit. In Maharashtra, PCC chief Manikrao Thakre’s term has ended and a change of guard is likely here too. In Jharkhand, a young face of the party, Gitashri Oraon, is said to have the backing of Rahul Gandhi. At present, she is a minister in the state and an AICC secretary.

The generational shift in the party has started getting reflected in other ways as well. For example, according to party insiders, it is primarily at the behest of Rahul that the NSUI and Youth Congress now send representatives to the state-level committees that select candidates for the upcoming General Election. That this transformation has at the moment become the central theme of the party was made apparent also at the AICC session held in the third week of January. More than half the party leaders who spoke in the AICC session that was held in Delhi this January were younger than 40.

What is even more significant is the fact that at the AICC session, Finance Minister P Chidambaram issued a call for ‘yuva Bharat, sashakta Bharat’ (young India, empowered India), urging the party to offer at least half its tickets for the 2014 General Election to those under 35 years of age. In his speech, he pointed out that 830 million people in the country are below 35, and 620 million below 25.

By all means, these changes—as well as the fact that the old guard in the party is allowing this change to unfold smoothly— constitute the foundations of a more youthful leadership structure. But can all its problems be solved by a generational change in the party’s leadership? No one at its 24 Akbar Road office wants to argue against the consequences this change may have on the electoral prospects of the party, come April-May. There are still many ifs and buts, and Rahul would have to negotiate these if he wants the grand old party to work some miracle among India’s younger voters. A mere change of guard is unlikely to be enough.