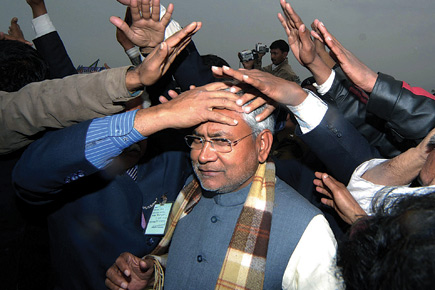 
The recent hostage crisis in Bihar ran on TV screens as a simple State-versus-Maoist drama of nerves. More significant, however, is what it was an indication of: the wearing away of an equilibrium which has existed between Bihar’s dominant overground and underground parties, interlinked as they have been for years by caste affinities.

With support patterns changing, the local leadership of the Communist Party of India (Maoist) is beset with confusion, and this could have far-reaching consequences in the state’s forthcoming Assembly election, scheduled to be held in six phases between 21 October and 20 November this year. At stake are more than two dozen Assembly seats, winning which could depend on which overground party in the electoral fray—Janata Dal-United (JD-U) or its rival Rashtriya Janata Dal (RJD)—gets the covert support of Maoist area commanders in various constituencies. Caste, this being Bihar, would play a key role in this.

Indeed, so entrenched is caste in the body politic of Bihar that it acts with equal intensity at all levels. If it swings votes during elections, it also creates friends among those who believe that power flows from the barrel of a gun. Though shadowy caste alliances are not easy to observe in day-to-day life, they show up at election time with enough force to explain why they are nurtured in the first place.

When Lalu Prasad’s RJD was in power, it was accused of secret links with the Maoist Communist Centre (MCC), which merged in 2004 with the CPI (People’s War) along with another Naxalite outfit, Party Unity group, to form what is now the consolidated CPI (Maoist), an all-India force that has shot to fame since. In Bihar, however, the MCC and Party Unity, despite their dissolution, have retained their character and areas of influence. In other words, local area commanders have not given up their earlier networks of loyalty.

While most commanders of the erstwhile MCC are Yadavs, who tend to vote RJD, most of those from the erstwhile Party Unity are Kurmis and Extremely Backward Castes (EBCs), who form the core of Nitish Kumar’s JD-U vote base.

If the JD-U has made political gains in the Patna-Arwal-Jehanabad belt of late, say observers, it should thank its hidden support. This has also given rise to a rather popular hypothesis on why Chief Minister Nitish Kumar prefers ‘development’ as a response to the region’s Maoist insurgency instead of the Union Government’s somewhat militaristic approach: the CM needs their behind-the-scenes help.

During a July meeting of CMs of Maoist-afflicted states held in New Delhi, Nitish Kumar was the only leader to strike a discordant note. Arguing that Naxalism was a fallout of socio-economic imbalances, he sought public work projects to alleviate rural distress and contain people’s disaffection with the State, even as Union Home Minister P Chidambaram called for a coordinated security push to take control of the areas as a prelude to any large-scale projects. In particular, the Bihar CM talked about his government’s Aapki Sarkar, Aapke Dwar (Your Government at Your Doorstep) programme, a showcase of welfare measures adopted in 69 villages of the state’s eight worst Maoist-affected districts. Not only did Nitish Kumar ask for central funds for this initiative, he also recommended it to fellow CMs.

What is even more revealing, though, is the fact that Nitish Kumar selected Kurmi-dominated Sikaria village in Jehanabad district for the launch of his doorstep programme. Sikaria village is considered the original epicentre of Party Unity activities in Bihar. The programme, observers note, has worked both ways—it has created new village amenities and also helped Nitish Kumar forge new links with his caste brethren who operate underground. Come election time, such goodwill can pay back.

Of course, the JD-U has rebuffed all this as a conspiracy theory. But then, Lalu Prasad’s RJD had also denied any links with Maoist area commanders of the erstwhile MCC. Denials apart, there was also the striking fact that there had not been any major police crackdown or Maoist attack for the last several years in Bihar.

The hostage crisis, in that sense, has been a bigger shock than most realise. It marks a shift in the established balance. The jungle encounter on 29 August between security forces and Maoists near Lakhisarai, in which seven policemen were killed and 10 injured, the kidnapping of four cops—Abhay Kumar Yadav, Rupesh Kumar, Lucas Tete and Ehsan Khan—and the subsequent hostage crisis show that all is no longer well in the state’s politics beneath the surface. The imbroglio was broken and three cops released (Lucas Tete, an Adivasi, was killed) by Maoists only after they were allowed to leave the Lakhisarai jungles with all the arms and ammunition they had looted on 29 August.

Two particular factors are thought to have upset the equilibrium. First, as security forces have gone after Maoists with greater determination to reduce their influence in an old red belt that includes districts like Gaya, Jehanabad, Patna, Arwal and Bhojpur, the insurgents have tried harder to expand their sway over newer parts of Bihar. The zone comprising Lakhisarai, Munger, Shekhpura, Bhagalpur and Khagaria—districts adjacent to Giridih and Santhal Pargana in Jharkhand—is relatively new to them. Second, Maoists in this new zone are facing a new set of caste contradictions, different from those in their earlier red belt. In Jehanabad they had tried to represent Kurmis’ fight against Bhumihar landlords, but now in Khagaria they find that their ‘people’s war’ requires them to fight against Kurmis’ bid to capture ceiling-surplus (gairmazarua) land being ploughed by Musahars, a Scheduled Caste. Conflicted loyalties here have left some Maoists confused: electoral support for the Kurmi-happy JD-U could earn them the distrust of Musahars.

In these circumstances, the JD-U is not sure if it can count on underground support. The jungle encounter and hostage crisis have worsened Nitish Kumar’s worries. With Maoists chafing about his regime being too weak to withstand Central pressure to act against them, his prospects of invoking the caste affinities of Maoist area commanders for electoral purposes may now be in disarray.

The Bihar CM finds himself in a fix. He cannot jump into Chidambaram’s lap, as any tough talk vis-à-vis Maoism may worsen his case with possible underground supporters. Political calculations suggest that he would be better off patting Maoists’ backs for their ‘humanitarian gesture’ of setting three kidnapped cops free (even though one of them was killed in cold blood) and advising them as usual to enter the democratic arena. That’s exactly what Nitish Kumar is doing at the moment, guided as he is by Bihar’s poll schedule.